The Top 10 Scariest Sharks – From Giants to Jaws!

You probably won’t find an article about the 10 Scariest Bunnies, because one look at a bunny and you almost automatically say, “Ah, cute!” But as soon as you hear the word shark, you may immediately think of Jaws or The Meg.

Hollywood has made movies of these amazing creatures because one look at a razor-edged, tooth-filled shark mouth and you should be scared, especially if one is swimming right at you! Sharks have a reputation of being aggressive and attacking humans, but the number of shark attacks per year is relatively low and the number of fatalities averages only four to five per year.

Compare that to the number of deaths caused by a collision with an animal (usually a deer) to 185 deaths in 2019 (Insurance Institute for Highway Safety). But that doesn’t stop us from being scared of sea-swimming sharks. Let’s find out about some of the scariest sharks.

Whale sharks are the largest fish in the world, they can grow to be 61 ft long! They also have a four-foot wide mouth with 3,000 sharp teeth! Sounds scary, right? Well, they are not. If you saw one you might be frightened initially, just by their sheer size, but whale sharks are docile animals that only eat plankton and small fish. Those 3,000 teeth are tiny, only 6mm long (or about the size of a pencil eraser) and they don’t use their teeth to chomp or chew.

If you were floating peacefully in the ocean and looked up to see a basking shark approaching, you would probably be scared. One look at their giant, wide-open mouth and you would think they may swallow you whole. But these sharks too are only scary looking, they feed on plankton and copepods, sifting the water with their mouths open. They are the second largest fish alive and can grow to be 39 ft long.

Now the Shortfin Mako looks scary and is scary. They are an aggressive shark that has a powerful bite. They hold the record of the strongest bite by a shark (second only to the bite of the crocodile) with a bite of 3,000lbs of force! Size-wise they are not the biggest sharks, at 12 feet long, but they make up for it with their intimidating signature big black eyes. The Shortfin Mako has been responsible for 9 attacks on humans and one fatality.

Their name says it all, their heads literally look like the head of a hammer! On either side of the hammer head is a menacing eye. Unlike the basking shark that prefers to stay near the surface of the ocean, great hammerheads scan the ocean floor for signs of stingray, their favorite dinner. There have been 16 recorded attacks on humans, but it is suspected that the sharks mistook the humans for one of their favorite prey.

Because sand tiger sharks swim near the shoreline, there are more sightings of these sharks than most species. Sand tiger sharks are also known by the name gray nurse sharks or ragged-tooth shark. The latter name is a descriptive name for sure. Their mouths are full of large, ragged teeth, definitely scary looking!

The most unique characteristic of the Sand Tiger shark is they are able to gulp air into their stomachs and use it to keep afloat, sneaking up on prey undetected. Makes you feel safe to go swimming, right? Although they are not known for their aggressiveness, they do have 36 attacks on humans, but none were fatal.

The Blacktip shark is named for the coloration of the tips of its fins. These smaller grey sharks, about 5 feet in length, can be identified by the black tips of their dorsal, pectoral and tail fins. Another identifying feature is that, similar to spinner sharks, they literally jump out of the water and spin 3-4 times before landing back in the water! These sharks do have some encounters with humans and have responded with 41 human attacks over the years.

The oceanic whitetip shark is also named because of the white color of the tips of its dorsal, pectoral and tail fins. Unfortunately these fins are highly valued for shark fin soup and have been overfished leading them to be listed as “Critically Endangered” by the IUCN. Many areas now provide legal protection to help prevent this species from going extinct. They have had 12 attack of humans that resulted in 3 fatalities.

Bull sharks should be called “Bully Sharks” because they are very aggressive and looking for trouble. There have been 117 unprovoked human attacks with 25 of them being fatal. Bull sharks can be found off the East Coast and in Gulf of Mexico, but they can also be in freshwater. They hunt near the shoreline and both during the day and night so have an increased chance of human interaction.

Different than the sand tiger shark, the tiger shark can be easily identified by its tiger-like stripes. These stripes are present as young but gradually fade away. They can grow to be 14 feet long and are known to eat just about anything including injured and dead sea animals. Since they are not discerning, it may explain why they have attacked 131 humans and caused 34 fatalities over the years.

The movie Jaws was modeled after the most aggressive shark in the world, the great white shark. They really are a scary looing shark and acting shark. They can grow to be 20 feet long and have a mouth full of large sharp teeth that are made to attack their prey. Some of their teeth can get to be 2 ½ inches long and they can chomp off 30lbs of meat in one bite! Great Whites are responsible for 333 human attacks, with 52 of those being fatal.

What about the Meg? Are Megalodons still alive today?

The Meg is another popular movie that showcases aggressive sharks, but are Megalodons still alive today? The answer is no, and it is probable that Megalodons existed way before humans and therefore never had human interactions. Researchers have studied the fossils of these giant sharks and believe they date back to 15.9- 2.6 million years ago.

Based on the fossil findings it is believed that the Megalodon was three times longer than a great white with one Megalodon tooth being 18cm long! A mouth full of those would have quite the bite. It is unclear how these amazing sharks became extinct although some believe a cooling of the ocean temperatures millions of years ago led to a massive loss of life for sea animals. For us, I feel much safer knowing there are not 60-foot sharks sharing my beach! 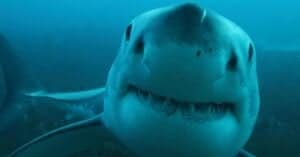 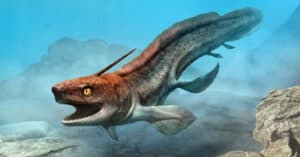 11 Types of Sharks that Went Extinct