Written by Cindy Rasmussen
Published: May 18, 2022

Some dogs have a distinct pattern, like the Dalmatian, which has white with black spots. Others are all white, like the Maltese. Some dogs are tri-colored, meaning they have fur that is three colors; black, brown/rust, and white. Often, the colors are in specific areas, like the Saint Bernard, which has a rust-colored back, white paws and chest, and a dark brown head with a white facial stripe. Some breeds are tri-colored but have a wide variation from dog to dog. Let’s look at the top 20 tri-colored dogs (including one newly recognized breed by the American Kennel Club!).

Let’s start with one of the biggest tri-colored dogs, the Saint Bernard. These dogs have a similar pattern across the breed; rust-colored back, white paws, and chest. Their heads have a masked look with a white head and brown/black eyes and ears. Saint Bernards can get to be 140-180 pounds when they are adults. The females are a little smaller at 120-140 pounds. The males can be 28-30 inches tall at the shoulder; that is nearly 3 feet!

Another big dog, the Bernese Mountain Dog, is a furry pet that can grow to be 80-115 pounds and 25-27 inches tall. Most of their back and legs are black. Then their legs fade into rust, followed by white paws. They have a fluffy white chest and a black rust mask with a white facial stripe. Despite their large size, they are good with children and are gentle pets.

If you are familiar with the classic TV show Lassie from the ’50s-’60s, then you know what a Collie looks like. Collies have long, silky hair and a pointed face. These dogs are medium-sized, their fur is a mix of white, rust, and brown, and their face has a long rust-colored snout. Their coloration and patterns are quite different from Collie to Collie. They get to be 24-26 inches tall and can weigh 60-75 pounds.

Shetland Sheepdogs look very much like Collies, but they are smaller. Collies are cousins of the Shetland Sheepdog (also called Shelties). Shelties are only 13-16 inches tall and around 15-25 pounds. They are well-behaved and easy to train and make good competitors in obedience and agility trials. Their coats are just as long and fluffy as the Collies and can have a variety of colorations.

Another TV show favorite is Snoopy from the comics and shows of Charles Shultz, The Peanuts. Snoopy is not tri-colored, he is just black and white, but many beagles are tri-colored. A common coloration for the small beagle is the back half of their back, which is black, with rust on the back legs and white on the front half of their back and legs. Their faces are masked with rust color around the eyes and ears and a white facial stripe. Beagles only get to be around 13 inches tall and weigh 20-30 pounds. Despite their smaller size, they are amazing hunting dogs and were bred to hunt in packs, so they get along well with other dogs.

Pomeranians come in a variety of colors. Some are all one color, like orange, but others are a tri-colored bundle of fluff. They have perky ears, curled tails, and fox-like faces. These tiny dogs are only 3-7 pounds heavy and 6-7 inches tall. They are an ideal pet for people living in smaller spaces or apartments since they don’t need a lot of exercise.

You will recognize these little dogs by their wing-like ears, which is where they get their name. “Papillon” is French for “butterfly.” Their fur is long and silky, with many of them being mostly white with a brown or rust face mask. The back and tail area may have splotches of darker fur as well. Papillons are only 5-10 pounds heavy and 8-11 inches tall.

Similar to Bernese Mountain Dogs, Greater Swiss Mountain Dogs are large dogs with big hearts. They are more muscular and larger than Bernese Mountain Dogs, with the males getting to be 115-140 pounds heavy and 25-28 inches tall. Their coloration is a black body that tapers down the legs, changing to rust, followed by white paws. Their face has a black mask with a mix of white and rust markings. Nicknamed Swissies, these dogs were originally from the Swiss Alps, and their powerful builds helped pull dog carts of supplies to the market.

Australian Cattle Dogs have the build of German Shepherds, but they have a coloration that is unique. Their fur is a mix of black, brown, and rust, with some looking blue-grey and others a rusty-white mix. Surprisingly, all Australian Cattle Dogs are born white as puppies! As they grow up, their fur changes to their adult color. These dogs were specifically bred to herd cattle, and they nip at the heels of the cattle to get their attention, so they often are called Australian Heelers.

Pembroke Welsh Corgis may not look like herding dogs, with their short little legs and long bodies, but they are actually quite agile. They are only 10-12 inches long, but they weigh 27-30 pounds. Their fur can be a variety of colors, with many being white and rust, but others are tri-colored with a mix of black, rust, and white. Corgis are eager to be trained and are good at agility competitions.

Basenjis are known as “barkless dogs” because they actually don’t bark. They make more of a yodel noise. They also have some cat-like features; they groom their short fur like cats! These dogs have fur that can be a mix of colors, with the tri-colored ones having markings similar to Mountain Dogs. They have a black back with white paws and a black mask with white and rust markings. They also have a very unique curled tail. Basenjis are medium-sized, lean dogs, weighing 22-24 pounds and reaching 16-17 inches tall.

The little dog with big ears and a big personality. Chihuahuas are the smallest dog breed, with most being less than six pounds and only 5-8 inches tall. They come in a variety of colors, including all-black, chocolate, and cream. The tri-colored Chihuahuas typically have a black body with rust legs and white paws and rust or black head and face.

Bull Terriers are short-haired, sturdy dogs. They have an elongated head, small eyes, and pointed triangle ears. Some are all-white or white with a few black splotches, while others are black, rust, and white. These dogs weigh 50-70 pounds but are only 21-22 inches tall.

When you combine the traits of two amazing dogs, the Bernese Mountain Dog and the Poodle, you get an amazing mix. Bernedoodles look like smaller Berners with curly fur. Their fur can be tri-colored, with a similar pattern as the Berners. They get to be 50-90 pounds and are 24-28 inches tall. They are very playful and great with kids and families!

Boxers are strong dogs with a muscular build. They are athletic dogs that were originally bred as big game hunters, strong enough to hold down bison and wild boars. Now, they make loyal pets and can be trained to be good watchdogs and family pets. Their fur is short-haired and can be a mix of colors. Tri-colored ones may have a body that is rust-colored with a white bib and dark brown head. Boxers can get to be 65-80 pounds heavy and 23-25 inches tall.

English Bulldogs have turned-up noses and scrunched faces, with their bottom teeth jutting out behind their bottom lip. They have flappy jowls that hang down on either side of their faces. Short and stocky, these dogs have a very distinct look. Some have a rust-colored body with white paws and chest and a few black markings on the face. They are only 14-15 inches tall but can weigh as much as 50 pounds!

Much smaller than English Bulldogs, French Bulldogs only get to be 11-13 inches tall and 20-28 pounds. They have big pointed ears and a scrunched-up wrinkly face. These dogs can be all white, all black, or a mix of colors, like a rust-colored body with a black face and a little white on the chest.

The Cavalier King Charles Spaniel is a toy breed and is one of the smaller dog breeds, with the adults being around 12 inches tall and weighing less than 18 pounds. They have long flowing fur that comes in various colors, but their long ears are usually a different color than their face color. Some tri-colored dogs have a black body and ears with a white chest and paws. Some have just a hint of rust on their face around their eyes.

The first word that comes to mind when you see a Basset Hound is “droopy.” Basset Hounds have faces that seem to droop and are surrounded by their long, droopy ears. They sit close to the ground and have long bodies and short legs. These dogs have a black back but a rust-colored front and head. Their chest and paws are usually white. They are around 15 inches tall and weigh between 40-65 pounds.

Introducing one of the newest breeds to the American Kennel Club, the Biewer Terrier (pronounced “Beaver Terrier”). Biewer Terriers look a lot like Yorkies, but while Yorkies have only two colors, all Biewer Terriers are tri-colored. Their fur has different patterns but includes white, brown/rust, and black. They have long-flowing fur as well. When it comes to size, these dogs are little, with the adults only reaching 4-8 pounds and 7-11 inches. Welcome to the club! 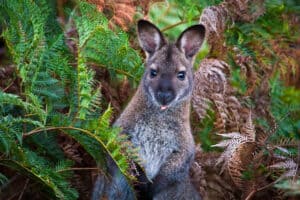