Anteaters are a type of mammal that lives in Central and South America. They have long snouts with a mouthful of pointy teeth.

Their fur is coarse and spiky, providing protection from insect bites while shielding them from sunburn. One way to tell an anteater apart from other mammals is by its two front claws, also known as fingers or thumbs. These claws allow them to tear open logs or termite mounds for food even when it has been sealed shut with dirt. Anteaters have a long tongue that they use to lick up insects, which make up the majority of their diet. But what else do anteaters eat? Let’s dig into their complete diet!

What do Anteaters Eat?

Anteaters primarily eat insect including ants, termites, and other critters that live in the dirt. They can also eat some fruit and vegetation. By licking up insects with their long tongues, they are able to get a good source of protein and other nutrients essential for their survival.

An anteater’s sharp teeth help them break open logs or termite mounds to get to the insects inside. Their claws also come in handy for tearing through tough surfaces. Thanks to their specialized diet, anteaters are able to thrive in the tropical climates of Central and South America.

Anteaters are often referred to as “ant-eaters.” However, this is not entirely accurate since they will only consume ants about 80 percent of the time. Anteaters can go months without eating ants if their food supply is low.

Insects are the main food source for anteaters, which they catch with their very long tongues. Some of the things anteaters eat are:

How Much do Anteaters Eat?

Typically anteaters eat around 20,000 insects each day! That’s a lot of ants and termites! They also consume other small creatures, such as worms, as well as some fruit and vegetation.

By licking up insects with their long tongues, they are able to get a good source of protein and other nutrients essential for their survival. Thanks to their specialized diet, anteaters are able to thrive in the tropical climates of Central and South America.

Who Competes with Anteaters for Food?

Just like there is competition for food among all living things, anteaters have their own share of competition. For example, anteaters compete with jaguars and people for insects. Anteaters will also hunt for food, such as insects and small creatures, within the homes of humans. Anteaters will then tear into the walls and foundations of homes to get at these tasty treats.

In some cases, anteaters can even become pests for humans. For example, they may dig through garbage cans in search of food. They may also raid bird feeders or pet food bowls. As a result, homeowners may need to take steps to protect their homes and property from these hungry animals.

How Does an Anteaters Diet Impact Other Species?

The diet of an anteater affects other species in many ways. For the anteater, their diet consists primarily of ants. This means that all ants are their natural prey. When an anteater eats an ant colony, they not only eat the ants but also the eggs and larvae. For other species with a natural habitat near anteaters, this is a significant problem. Elephants and giraffes have been found with a stomach full of ants after consuming food that was near or on territory that had recently been consumed by an anteater.

In addition to impacting the populations of other species, there are some unintended consequences for the diet of the anteater as well. The most significant problem with this type of diet is the amount of formic acid consumed when eating ants. Formic acid can actually act as a natural pesticide for ants; for an anteater, though, it is toxic. This means that in order to detoxify the formic acid found in their diet, anteaters must consume vast amounts of water every day (50 liters or ~13 gallons).

Are Anteaters Dangerous to Humans?

Anteaters are not dangerous to humans. Anteaters are shy, gentle creatures that spend most of their time foraging for food or sleeping. They will typically flee if they encounter a human, and they have no venom or other means of defending themselves. While it is possible for an anteater to hurt someone if it feels threatened, such cases are rare. In fact, the biggest danger to an anteater is typically humans.

What do Different Types of Anteaters Eat?

The main diet for the Giant Anteater is ants and termites. In some areas there are no termites so they will eat ants instead. They also have been known to eat small lizards, eggs, fruit and carrion occasionally. The anteaters stay away from wasp, bee and hornet nests.

The diet for the Lesser Anteater is mostly ants, but they will also eat other insects such as grasshoppers, spiders and scorpions. They have also been known to eat some fruit and small lizards occasionally. As with the Giant Anteater, they stay away from wasp, bee and hornet nests.

How do Anteaters Hunt?

For anteaters, hunting for food is a daily activity. Anteaters hunt for insects by using their tongue and their very long claws to catch them.

So how do anteaters catch their prey? Their long tongues can reach up to 18 inches and help them lick up insects (mostly ants). An anteater’s sharp teeth help them break open logs or termite mounds to get at the tasty insects inside. Their front claws also come in handy when they need to tear through tough surfaces.

What do Baby Anteaters Eat?

Baby anteaters begin life by drinking milk from their mother for the first several months of their lives. They will soon begin eating ants, but they will also drink milk for up to six months. Baby anteaters grow quickly and start to eat more and more ants as they develop.

Bobcats In Arkansas: Types and Where They Live 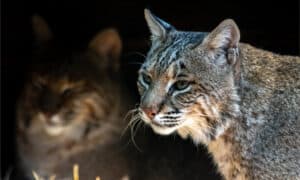 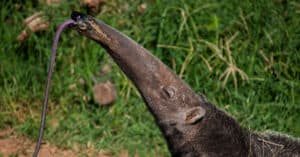