Click through all of our Striped Hyena images in the gallery. 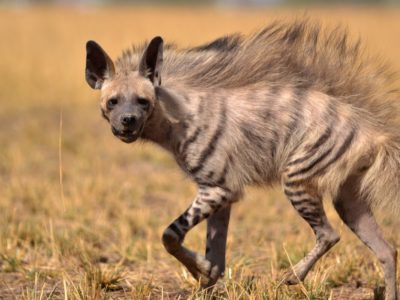 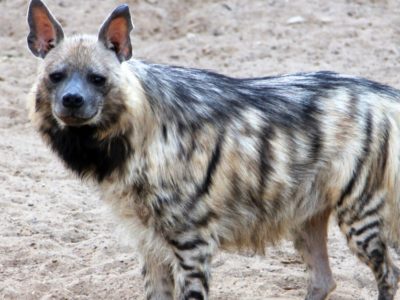 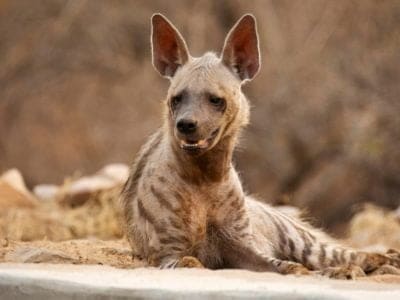 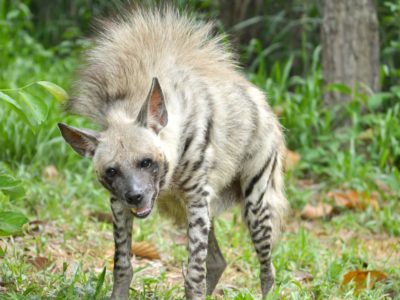 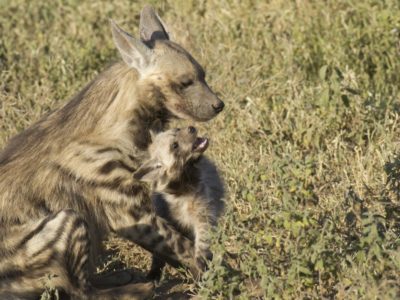 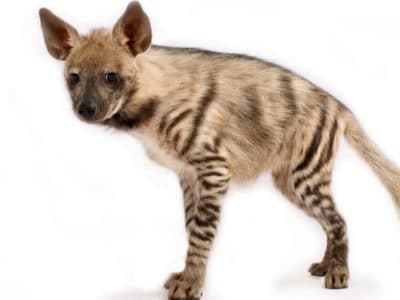 View all of the Striped Hyena images!

The Striped Hyena is a medium-sized mammal. It is a scavenging animal that is found in Africa, West India, the Middle East, and the Arabian Peninsula. Some people like to have it as a pet.

There are several interesting facts about striped hyenas. Both the male and female striped hyenas are very similar in appearance. However, males are known to be a little larger. They usually have light grey to beige color coats and have a black patch on their throat.

The facts say that these animals go by the scientific name Hyaena hyaena. They belong to the kingdom Animalia and phylum Chordata. Their class is called Mammalia and the order is Carnivora. The suborder is known to be Feliformia, and the family is Hyaenidae. The genus is Hyaena.

The word “Hyaena” comes from a Greek word – “huaina.” The term is derived from the word for pig, suggesting a correlation between the bristly mane and the same bristles of the pig. The spelling of “hyaena” is Latin, but the English modified the spelling, making it the word “hyena” that is commonly used today.

They have a downward sloping back – much like all the species of the hyenas. When they are threatened, the mane in their backs can become erect, making them look much larger than usual in front of their predators.

The male and the female striped hyenas are known to be remarkably similar in appearance. However, the males are known to be slightly larger than the females. In size, these animals usually are about 1 – 1.15 meters in length. Their tail measures about 12.5 inches. Females usually weigh about 57 to 75 pounds while the males weigh about 57 to 90 pounds.

These animals have a thick black face and long tails that are covered in thick hair or fur. The tails are usually black and white. In addition to this, their paws have four short, blunt, and non-retractable claws.

The hind legs of the striped hyenas are heavier as well as shorter than their back legs.

These animals are scavengers. They are nomadic, moving from one water hole to another. However, they often like to stay closer to the water source and will never move more than six miles away from the water source.

They are solitary hunters which means they usually hunt when they are alone. However, they are also known to sometimes form small family groups while scavenging dead animals. They also live in dens in family groups. However, the home range of the striped hyenas is smaller than that of the spotted and brown hyenas.

These animals are typically found in deserts, semi-deserts, woodlands, scrub forests, acacia bushlands, grasslands, tropical savannas, and rocky terrains. Some people like to have it as a pet.

These scavenging animals are usually found in Africa, West India, the Middle East, and the Arabian Peninsula.
The family groups are known to reside in dens that are usually caves that have narrow entrances. These caves also have large boulders. The dens where these animals live with their family groups can span over a distance of four to five meters.

These animals are known to be nocturnal omnivores and usually feed on fruits, melons, dates, small insects, and small animals. They usually are scavengers and feed on the remains of whatever other animals kill. Their powerful jaws are used to crush bones and to gnaw. The striped hyenas are known to be active scavengers and they scavenge more than they hunt for food.

Apart from this, they can drink several types of water. They do well with salt water, fresh water, and even soda water (if it is provided to them). If available, striped hyenas drink water every night. However, they can also survive for long periods without water if the need be.

While lions probably sometimes kill these animals, they do not have any major predators. They do compete with the big cats to grab hold of prey. In this fight, the big cats are likely to win.

However, humans for a major risk for them. This is because humans are known to poison and/or hunt these animals. This is a major threat to their life. Apart from that, habitat loss because of human activities like industrialization and urbanization is also a threat to the existence of the striped hyenas.

These animals do not have a specific breeding season. A litter of 2-4 cubs is born in a gestation period in the range of 90 to 92 days. The pup is born in the nesting dens.

When the pup or cub is born, it has no eyesight. They are born blind, and their ear canals are also closed. At that time, their coats are white to grey and they have clear black stripes on their bodies. The cubs can open their eyes after about 7 to 8 days and their teeth develop after about three weeks.

They can eat solid food after a month. The weaning, however, can vary from eight to twelve months. Both the male and the female are known to care for the babies. The lifespan of these animals is about 24 years when it lives in captivity.

Due to there being different varieties of hyenas, it is difficult to understand the exact population numbers. However, the Striped Hyena has been classified as ‘Near Threatened’ by the IUCN.

It is now extinct in Europe but can still be spotted in Anatolia, Turkey on rare occasions. Some people do like to have hyenas as a pet.

Striped hyenas are known to be nocturnal omnivores and usually feed on fruits, melons, dates, small insects, and small animals. They are also known to drink several types of water.

The striped hyenas are not dangerous or aggressive. They are known to be solitary animals and usually stay away from the usual wildlife.

While the striped hyenas are not known for their laugh, they do make laughing sounds. Their laugh could sound like a chattering sound.

Lions can probably kill striped hyenas. But humans remain the biggest threat to these animals.

How many striped hyenas are left?

Biologists fear that in today’s time, only about 5000 to 14000 striped hyenas are left in the world.

How big are striped hyenas?

Where do striped hyenas live?