Was created as an accident. 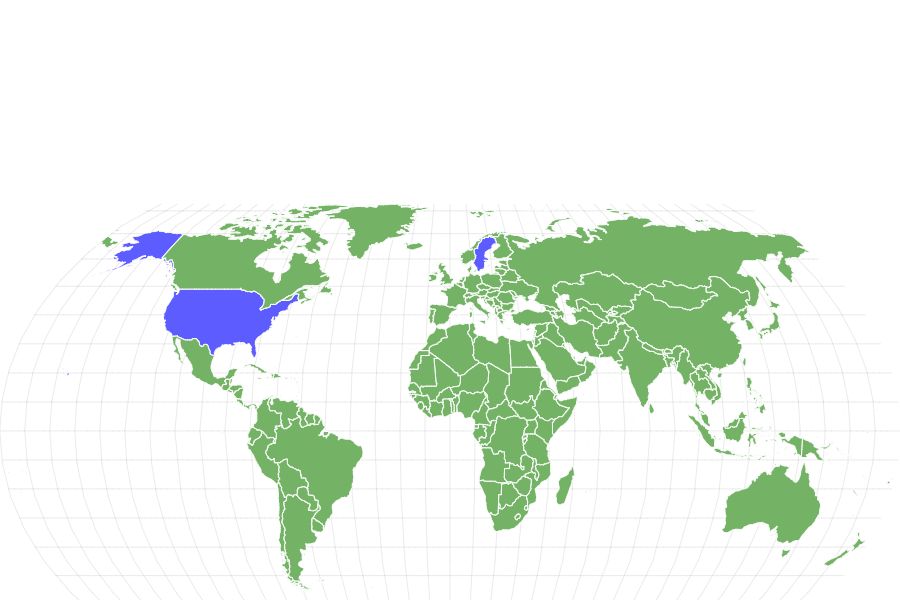 View all of our Angora Ferret pictures in the gallery.

View all of the Angora Ferret images!

The angora ferret is a lush, beautiful, and soft version of the domestic ferret, though they are classified under the same scientific name.

They come in many colors and are often encouraged as pets for children and families for their non-aggressive nature. Even though they have only been available for a few decades, breeders have carefully maintained their pedigree, so their genetic line is fairly pure. Since domesticated ferrets are not legal in every state, anyone who wants to adopt one should check with the local laws first.

The angora ferret’s scientific name is Mustela furo. While European polecats and North American black-footed ferrets are separate species, “Mustela furo” refers to all domesticated pet ferrets. There is no difference scientifically between the species, and the separation of angora ferrets is simply to describe their fur.

The word “furo” comes from the Late Latin word for “thief,” while “Mustela” means “weasel.”

The reason that the angora ferret has earned its name is from the most telltale part of their appearance – their fur. This fur is long and silky, thanks to breeding on a fur farm when the species was first created. Though the animal was originally bred for their fur, their lovability earned them a place as a ferret many years later. The undercoat and overcoat are the same lengths, measuring 2-8 inches long.

Their nose is another distinct feature. With all of this fur, the Angora has an extra fold within their nose, which is covered with a tuft of fur. They sometimes also have a tuft of fur that covers the nose. The average length of this ferret is 18-21 inches, and they typically weigh no more than 4.5 lbs.

One of the reasons that people tend to love domesticated ferrets so much is that they are playful and friendly, making them a great companion for families with children. They are smart, curious, and seem to have a constant amount of energy to keep them active. While they love to find toys and hide them, they can quickly shred one of these toys in a matter of minutes.

Typically, the angora ferret is solitary when it comes to other ferrets. They don’t need any other animals in the home to make them feel content because they get this love from their family that adopts them. They can even learn tricks, including how to use a litter box.

Since the angora ferret is completely domesticated, their habitat needs to be created by their owner. They were originally found in Europe where they were bred at a facility in Scandinavia, but they are currently sold with breeders so they can live anywhere.

A good habitat gives them ample space to move around, though owners will need to give time to roam around the house for about two hours a day for exploration and to burn off energy. Supervision is a necessity because their playtime can quickly become destructive. They need places where they can run and hide, but their domestication makes it easy to care for them anywhere.

Like all domestic ferrets, the angora ferret is carnivorous, which means that they need their owner to provide food that is high in protein with limited carbohydrates. Often, pet owners will give their angoras cat food that is rich in protein. If they eat prepared food, chicken and turkey are both healthy for their bodies.

Even with the domestication of this breed, and their carnivorous diet, the angora ferret could have many predators if they ever get outside. Larger carnivorous mammals like to chase and hunt them, so they may not be a good pet for a home with other animals. Their own diet is equally carnivorous, but there’s little need for them to hunt with their owners around because everything is provided for them.

Angora ferrets are mostly protected from predators because they live in homes with their owners. If there are other dogs or cats in the home, they may become victims of their natural hunting instincts. Wolves and larger game are also a threat if they escape.

What Do Angora Ferrets Eat?

With an owner to care for them, the angora ferret doesn’t have to hunt for prey like its wild relatives; while a wild ferret would hunt for possums, rabbits, prairie dogs, rodents, and hedgehogs.

Mating for the angora ferret is rather well controlled because the species is specifically bred for a pedigree, allowing breeders to sell them for a high cost. When the female becomes pregnant, gestation lasts for about 42 days, and she gives birth to live young. The average size of her litter is 8 babies, and there is no evidence that monogamy is a consideration. These babies typically weigh about 6-12 grams when they are born.

The babies – better known as kits – drink their mother’s milk until they are at least 7 weeks old. They are born without sight or hearing, and they initially have no teeth. Their teeth don’t grow in until they are 3 weeks old, followed by the opening of their ears and eyes when they are about 4-5 weeks old.

The average life expectancy of the angora ferret is 5-9 years old. Some of the potential health concerns that they can face are minor, like diarrhea or vomiting if their food doesn’t sit well in their stomach. However, like other variations of ferret, they can also develop cancer or adrenal disease.

The population of angora ferrets in the world is entirely determined by the demand amongst breeders. Since they are domestic animals that are protected through breeding, they are not extinct and have a steadily increasing population.
Typically, you can buy an angora ferret for between $65 and $250 for the total cost. Their coat color and their pedigree make a difference in the overall cost, but they are still a new variation. Individuals who want to own this type of pet may have to travel far. Plus, some areas in the United States – like Hawaii and California – have made it illegal to own any type of ferret, so you might have to check with the local laws.

What is an angora ferret?

The angora ferret is most notable for its long and soft fur, which is necessary to the identification of this species over other ferrets. They don’t have an undercoat, but they are very soft. They have great memory and are intelligent. Their typical colors are white, black, brown, and champagne with many variations between. The average lifespan of this ferret is 5-9 years.

How much is an angora ferret?

The typical cost to adopt an angora ferret as a pet from a breeder ranges from $65 to $250. The main factor that impacts this price is color. Also, you’ll end up paying higher prices with an experienced breeder with a good reputation because they know their value. Due to the exclusivity of the angora ferret as a pet, you won’t likely be able to reduce the cost by adopting from an animal shelter.

Where can I get an angora ferret?

Angora ferrets are typically sold by breeders or are fostered by rescues. If you want a lower price for this pet, choosing a rescue is a better fiscal choice. However, opting for a breeder will give you greater odds of a healthy ferret, even with the high cost.

Ferrets of all variations are popular pets among consumers. They have a unique ability to offer all of the beloved animal traits of dogs and cats, but they are smaller in size. Their diet is easy to maintain, and they are quite outgoing with their family members. Plus, since they have a lifespan of up to 9 years, they’ll be around for a while if you adopt them as a pup.

How do I know if my ferret is Angora?

Proper identification of an Angora ferret is necessary to ensure that you get what you pay for from the breeder. These ferrets are much smaller than standard ferrets, but their most notable quality is the long and shiny fur.