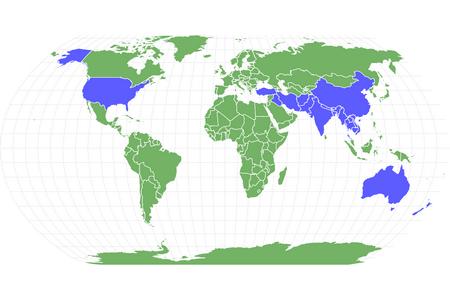 View all of our Cashmere Goat pictures in the gallery.

View all of the Cashmere Goat images!

“Cashmere goat are named after the Kashmir regions of India and Pakistan.”

There’s no such thing as a “purebred” cashmere goat. A cashmere goat is not a separate breed of a goat at all but any goat whose soft, downy winter undercoat can be harvested for cashmere fibers. Consequently, these goats can look very different from one another. Undercoat colors include black, white, grey, and brown. Their coats are naturally shed each spring, which is when the fleece is harvested.

There are an estimated 700 million cashmere-producing goats throughout the world, including the white Australian Cashmere goat, the Pashmina goat of southeast Asia and the Himalayan foothills, the white Hexi Cashmere goat of the Gobi Desert, and the Alasan (Alashanzuoqi), Arbus, Erlangshan, Hanshan and Wuzhumuqin strains from Mongolia. China produces 60 percent of the cashmere used by the world’s fashion industries.

Several things distinguish these goats from their barnyard cousins:

Every goat except the Angora goat has an undercoat with finer fibers than its overcoat, so theoretically, any goat except the Angora can be a cashmere goat. The scientific name for the domestic goat is Capra aegagrus hircus. Goats were first domesticated between 8,000 and 9,000 years ago, and “Capra” and “hircus” are both Latin words for goat.

As noted, these goats are not a specific breed. Their overall appearance will vary according to what breed they are, but their distinguishing characteristic is a long, dense undercoat that develops in the colder months and is the source of the cashmere fibers. Selective breeding helps produce animals with significant amounts of this undercoat. Since these goats are not a breed as such, they have no strict height or weight requirements

Australian goats, also known as Merritt Cashmere goats, are strong, sturdy, well-muscled animals with white coats. Australian goats are derived from the feral goats thought to be descended from the domesticated animals brought over by British penal colony settlers. In the early 1970s, researchers identified cashmere fibers in a herd of feral goats, and the industry was developed.

Pashmina cashmere goats, also known as Changthangi or Chagra goats, are native to the high plateaus of the Himalayan foothills though they can now be found in other parts of southeast Asia. They stand between 22 and 26 inches tall and have distinctive, rounded horns. Though their outer coats are generally white, their cashmere fibers can be white, black, or grey. Pashmina goats are generally thought to produce the finest quality cashmere fibers.

Hexi Cashmere goats hail from the region around the Gobi desert though they now can be found throughout China’s Ningxia, Qinghai, and Gansu provinces. These medium-sized goats can be either white or black.

Mongolian cashmere goats come in a variety of colors, including white, black, brown, and grey. They’re typically tended by nomads for whom they’re also a primary source of milk.

These goats don’t behave in a markedly different fashion from goats who are not bred for their fiber. They are social animals that gather in herds that can range anywhere from four to 100 members. Males are called bucks or billys, and can be distinguished by their beards; female goats are called does or nannies while immature goats are called kids.

Goats are more aggressive than their distant relatives, cows, and sheep. Their herds usually show signs of a pecking order. Despite old wives’ tales that characterize them as dirty animals, they are actually quite fastidious about cleanliness. They groom themselves by licking parts of their bodies. They’re inquisitive, and they use their mouths and noses to investigate; this may be the source of that other old wives’ tale that goats will eat anything. Actually, goats are picky eaters that prefer to graze on grass, shrubs, and small trees.

Today, these goats are widely distributed throughout China, Southeast Asia, Turkey, Afghanistan, Iraq, Iran, Kashmir, Australia, and New Zealand. There are even some of these goats in the United States.

Harvesting goats for fiber, however, probably began in colder climates where the animal’s dense undercoat came to provide a significant advantage as insulation against even the coldest of temperatures.

In the U.S., Australia, and New Zealand, domesticated goats graze in pastures throughout the warmer months and eat hay in the winter. It’s been estimated that a single goat will eat one square bale of hay per head per week. They also need access to fresh clean water. Pregnant and nursing goats may need supplemental feedings of grain.

In China, these goats are raised on enormous, industrial-style farms where they are mostly fed corn.

These goats in the U.S., Australia, and New Zealand are raised in free-range herds. The primary animal threat to these herds in the U.S. is coyote populations, which though native to the prairies, have now expanded into all 48 continental states.

While they can tolerate temperatures down to -15 degrees Fahrenheit, the goats will feel the cold if their protective undercoats get wet, so it’s important to offer them some sort of protection against rain. Their horns also occasionally get caught in small-mesh fencing or in trees, which can be life-threatening. These goats can develop tetanus, so it’s important for them to be vaccinated.

These goats are domesticated animals, and as such, they are not endangered.

What does the cashmere goat eat?

These goats are herbivores. Their diet consists largely of grass, shrubs, and small trees. Contrary to popular superstition, they do not eat tin cans.

Breeding occurs in the late summer or early fall as a culmination of the rutting season. Female goats exude a powerful musky odor to attract the attention of males, and males will frequently fight over females. The gestation period is typically five months long so that kids are born between late February and the beginning of May.

It’s been estimated that there are 700 million of these goats in the world. China has approximately 120 million of them. Other areas where these animals are found include Mongolia, Southeast Asia, Australia, Turkey, Afghanistan, Iraq, Iran, and Kashmir. The demand for cashmere is going down throughout the world, however, so cashmere goat population numbers may be declining.

How much is a cashmere goat worth?

The price for a cashmere goat in the U.S. generally ranges from between $175 and $550. The price depends upon a number of different factors. Larger goats will typically produce more fiber than smaller goats, so their price is generally higher. Thus, male goats will cost more than female goats because they are larger. Adult goats will generally cost more than kids.

Are there cashmere goats in the United States?

Given how cheaply cashmere can be imported from China, it is challenging to make a profit on cashmere produced in the U.S. Only a handful of the 500 American cashmere goat farms is able to turn a profit on fiber alone, so many of these farms supplement their fiber earnings with goat milk and goat cheese.

How much does a cashmere goat cost?

Where do cashmere goats come from?

The origin of the term “cashmere” is derived from the name of the lower Himalayan region Kashmir, which is one of the first places historically where cashmere fiber was harvested from goats. This does not mean that the origin of the cashmere goat itself is Kashmir, however. In truth, any goat except the Angora goat is capable of being a cashmere goat. (Angora goats are the only goat species that doesn’t possess a double coat.) The earliest traces of domesticated goats were found in an archeological dig in what’s now called Iran, so perhaps it can be said that the origin of cashmere goats is somewhere in the Middle East.