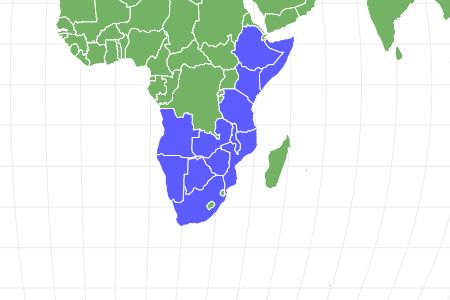 View all of our Dik-Dik pictures in the gallery.

View all of the Dik-Dik images!

A dik-dik is a very small antelope. They are nocturnal and live in Africa. They have many predators and play an important part in the food chain. These animals absorb most of the water their bodies need from the plants they chew. The lifespan of this wild creature is 5 to 10 years.

Madoqua kirkii is the scientific name of Kirk’s dik-dik. The word Madoqua relates to the genus of this animal and kirkii refers to the name Kirk’s.

There are three other species of this animal:

The upper body of this small antelope is covered in brownish-gray hair, and it has tan hair on its underbelly. The species known as a silver dik-dik is an exception with gray or silver-colored hair on its upper body. This animal has small areas of black at the corner of each eye. The dark color is from a liquid that is released from glands located there. Males have short, ridged 3-inch-long horns that bend in a backward direction. These animals have two pointed ears, four hooves, a long nose, and huge brown eyes. They rely on their nose for more than a sense of smell. They can use their long nose to pick up things and grab vegetation as they eat.

They can be from 12 to 16 inches tall and have a weight ranging from 7-15 pounds. A line of 7 and a half golf tees end to end on the ground would equal the height of a 16-inch dik-dik. One weighing 15 pounds would be equal in weight to a bowling ball. Now you see why they are called very small antelopes! The Kirk’s is the largest species and can be as tall as 18 inches at the shoulder.

A Suni is another small antelope living in Africa. Sunis and dik-diks are a lot alike in size, weight, and height. One difference is Sunis are more social than dik-diks.

Because of its small size, this animal is vulnerable to many predators. Their only defense is their speed. They can run up to 26mph. Also, they run in a zig-zagging pattern to try to escape. If a predator is not able to mimic this zig-zagging pattern, it can give this small antelope the seconds it needs to get away.

They make a noise with their nose when they spot a predator in the area. This noise sounds like the words dik-dik. This is how they warn others of danger in the area. Dik-diks are shy and like to remain hidden in the shrubs and brush.

These small antelopes live in monogamous pairs. This is rare because antelopes usually live in large groups or herds. A herd of sable antelopes can contain as many as 70 members! Living in a large herd can provide these bigger antelopes with protection from predators.

One adaptation of this animal helps them cope with the extremely hot temperatures in Africa. This animal pants in order to push blood into its long nose. The blood is cooled by evaporation before its circulated back through the animal’s body.

These small antelopes live in the eastern and southern parts of Africa. They live in a warm climate on savannahs, shrublands, and some wooded areas. They avoid areas with tall grass due to their small size. You can imagine how easily they could become lost in a field of tall grass! These creatures look for places with lots of vegetation around them, so they always have a food source. Their dark hair helps them to blend in with their dry environment.

Though these animals may choose a territory near a stream or creek, they don’t require a water source in their habitat. They get most of the water they need from the vegetation and berries in their diet.

A monogamous pair of dik-diks go to a lot of trouble to establish their territory. Both members of the pair urinate and spread their feces in areas to mark the boundaries of their territory. In addition, they put their scent onto their territory by rubbing their faces in the grass or shaking their heads. This leaves behind a dark, tar-like liquid leaking from the glands located at the corners of their eyes. This gland is called the preorbital gland.

Sometimes male dik-diks ignore all of these scent marks and wander into the territories belonging to other male and female pairs. When this happens, the males go through a routine of charging at one another. During this encounter, they may bump their heads together or push each other. This can go on for several minutes. Eventually, one male moves away and lets the other have the territory. Normally, neither animal is injured after this confrontation. But, there’s a very good chance that the intruder won’t come back.

Humans have also been known to hunt or trap dik-diks. Traps are set in the scrubland for these animals to step into. They are poached so their skin and coat can be used to make gloves. These gloves are sold for a high price. Hunters may also kill these animals because their sounds alert other animals and make them run away.

Three species of dik-dik including the Kirkland’s, Guenther’s, and Salt’s are categorized as Least Concern with a stable population by the IUCN Red List of Threatened Species. The Silver species is listed as Data Deficient, and biologists believe their population is decreasing.

There are areas of land in Africa that offer protection to these animals, so they won’t fall prey to hunters. These protections have contributed to keeping their population stable.

What do dik-diks eat?

These animals are herbivores and eat a diet of roots, plants, grass, and berries. They soak in a lot of water by eating vegetation. So, they don’t have to drink water from creeks or streams very often. This is beneficial to them because they are particularly vulnerable to predators while visiting a body of water to drink.

These animals live in pairs of males and females on a section of territory. They are monogamous. In terms of sexual maturity, males reach maturity at 12 months and females at 6 months. The female can have two babies per year, but only has one at a time.

Generally, females give birth in November and December and then in April and May. She gives live birth to a baby or calf, weighing from 1 to 1.6 pounds. This animal pays a big price for being so small at birth. In fact, a newborn’s survival rate is 50 percent. So, it’s not surprising to learn that this creature stands up just 5 minutes after birth! It must do all it can to stay safe from nearby predators.

As a comparison, another small creature called the Royal antelope is monogamous and has a single newborn calf that weighs a little bit more at 1.8 to 2.2 pounds.

The mother nurses her calf for about 6 weeks before it starts the weaning process. They are fully weaned at around 3 to 4 months of age. At 7 months of age, the male and female dik-diks chase the calf out of their territory so it can live independently and find a mate.

The lifespan of a wild dik-dik is 5 to 10 years. In captivity, its lifespan can reach 15 years. They live longer in captivity because they don’t have to deal with predators. This animal is categorized as Least Concern with a stable population.

The Salt, Guenther’s, and Kirkland’s dik-dik are all listed as Least Concern with a stable population. The silver dik-dik is Data Deficient.

What is a dik-dik?

This animal is a very small antelope with brownish gray hair, a short nose, and large dark eyes. It lives in various areas on the continent of Africa. Its habitat includes shrublands and savannahs. Their diet consists of berries, grass, roots, and other vegetation.

These animals pay a price for being so small compared to others in their habitat. In short, they have many predators and are always on the lookout for danger. But they can run at speeds of up to 26mph and are able to warn other dik-diks with a whistling sound they make through their nose. The noise this animal makes sounds a lot like its own name.

Are dik-diks carnivores, herbivores or omnivores?

How do you pronounce dik-dik?

Pronounce this animal’s name like you are saying the words dick-dick. So, you pronounce this word with a short sounding letter i.

Can you keep a dik-dik as a pet?

No, dik-diks are not house pets. Though their small size may make them seem like good pets, they can cause damage and hurt themselves inside a home. They are wild animals that need to be out on the savannah or in the shrublands where they have plenty of space to run and be free!

Why is a dik-dik called a dik-dik?

This animal earned its name due to a sound it makes. If one of these small antelopes sees or picks up the scent of a predator in the area it alerts other dik-diks with a whistling sound made through its nose. The noise sounds like the words dik-dik. Alerting other animals of a predator gives this small creature some time to hide or get away.

Is a dik-dik endangered?

No, they are not endangered. They are Least Concern with a stable population.