Named for the Arabic word for love poems 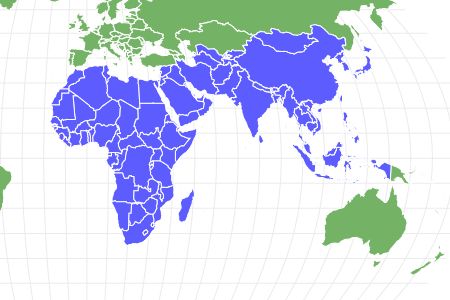 View all of our Gazelle pictures in the gallery.

View all of the Gazelle images!

“The name for a gazelle comes from the Arabic word for a love poem.”

The gazelle is a graceful, intelligent, and alert creature. Though they once were in the thousands in Africa and Asia, this beautiful beast now only has a few hundred left in their family as the result of hunting. At great speeds, it can’t quite outrun predators but the way they jump helps them to get away. Though challenged in number, you can still see just under 500 in the wild today.

Here are a few fun facts about gazelle animals:

The scientific name of the gazelle (which is this mammal’s common name) is gazella gazella. It belongs to the Bovidae family of the Mammalia class. This particular type of animal covers 19 different species, which include (but are not limited to) the:

The scientific name “gazella gazella” comes from the Arabic word ghazāl, which is from the word for a love poem.

Identification of a gazelle is rather easy if you look for the yellowish-brown coat with a white underbelly. As part of the antelope family, they have rather long horns that usually curve. Though other antelope species only have males with horns, the females also have them in this particular animal.

The size varies greatly between the different types of these animals. Ranging from two to 3.6 feet tall, they are quite short in comparison with other antelopes. While much of their reliance to conceal themselves is on speed, they also camouflage with the desert landscape with their brownish coloring. The specific markings in their coat allow the identification of different species.

Gazelles live within a group called a herd, which can be comprised of as many as 700 other gazelles. However, some herds are much smaller, including 10-30 females with their fawns. Most often, females and males do not live together in the same herd, as males tend to exclusively live in a small group or completely alone. Any herd that is only made of male gazelles in the wild is called a bachelor’s herd. To protect themselves from an onslaught of predators, gazelles are incredibly alert. They constantly look around with their large eyes to see where the next attack may happen.

The ideal habitat of this animal is an arid area that doesn’t experience much rainfall, which is why the majority of them can be found in certain parts of Africa and Asia. Their preferred ecosystems are sand dunes, deserts, grasslands, savannahs, and plateaus. They don’t need much space for their small bodies, but they need to live near areas with the leaves and shrubs in their diet, reducing their need for water through seasons that are especially dry.

When the dry seasons settle in, most species of gazelle will migrate with other animals and species in a movement called the Great Migration. Alongside eland, impala, zebras, and wildebeest, these animals make the trek each year in the wild. Unfortunately, about 250,000 animals in the migration do not make it.

The gazelle is an herbivore, placing them at the bottom of the food chain with no natural prey. They prefer the grass and shrubbery in their habitat to fill their stomach. Their place as prey is essential to the major predators in their natural habitats, like lions, cheetahs, and other apex predators. The only adjustment that a gazelle makes for their diet is that they migrate where they have access to the most plant life to consume.

The answer to this question is long because the gazelle is a major source of nutrients to huge predators, even though the antelope stands less than four feet tall. Some of the main predators of this animal include cheetahs, leopards, crocodiles, jackals, lions, hyenas, and wild dogs. They are sometimes hunted by humans as well, which is one of the main reasons for their dwindling numbers.

What Does the Gazelle Eat?

Gazelles are not hunters. Their entire diet consists of plants that are found in their typical habitat. The only exception in their diet is when a gazelle is a baby (a.k.a. a fawn), during which time it drinks its mother’s milk.

When the male and the female gazelles are ready to mate, the ritual starts off with the male as he lowers his head and neck, stretching them. He follows closely behind the female, marching and prancing to get her attention. The average pregnancy for a gazelle baby is six months, though the female may give birth to up to two fawns at a time.
By the time the baby, which is called a fawn, is 20 minutes old, they can stand and nurse. The average birth weight of a newborn fawn is 10% to 12% of its mother’s weight.

Since they are an easy target for identification by predators, the mother conceals them in areas of tall grass. These babies have to stay with their mothers until they are weaned, which takes about four to five months. Females reach sexual maturity by nine months old while males take 18 months. The average lifespan of a gazelle is 10-15 years old.

In the entire world, less than 500 gazelles still roam in the wild. The population has continued to trend downward in recent years, though the majority of the reason for their diminished numbers is due to hunting by humans.
The gazelle is considered to be critically endangered by the IUCN. The NGO Sahara Conservation Fund has worked to restore the population of Dama gazelle in Africa through capturing them for reproduction, but the numbers still are suffering.

What is a gazelle?

A gazelle is part of the antelope family of mammals. They often have curved horns (though certain species like the Thomson’s gazelle and the Addra gazelle do not), paired with yellowish-brown fur along with the majority of their body with the exception of their belly (which is white). It is most often found in Africa and Asia. One of the most well-known facts about gazelles is that they have incredible speed.

How fast can a gazelle run?

On average, gazelles can run at a speed of 60 mph in short bursts. Longer runs typically are at a speed of 30 mph. Gazelle animals must be fast to outrun predators like lions and leopards.

Gazelles have long horns, though there are some species with straight horns and others with curved horns. They have a yellowish-brown coat, sometimes separating the white belly with a bold streak of black fur (which is common for the Addra gazelle and the Thomson’s gazelle).

What is a female gazelle called?

A female gazelle is called a cow.

Can gazelles be pets?

While it is possible to keep a gazelle as a pet, it is best to let them live in the wild where they belong. They don’t make good pets as they require a habitat of substantial size to accommodate them. Most areas have deemed their use as a pet to be illegal.

What is a gazelle known for?

The gazelle animal is known for its great speed. As mentioned above, these animals can reach a speed of up to 60 mph, which is their main defense against predators.

Yes. Gazelles are incredibly smart, adapting to their surroundings with ease.

What are the key differences between antelopes and gazelles?

The key differences between antelopes and gazelles are appearance, stotting, habitat, speed, and lifespan.

What are the differences between an impala and a gazelle?

The main difference between a gazelle and an impala is that gazelles are a group of related antelope, while impalas are antelopes but don’t belong to the large taxonomic group known as gazelles.

Read about the other differences here!