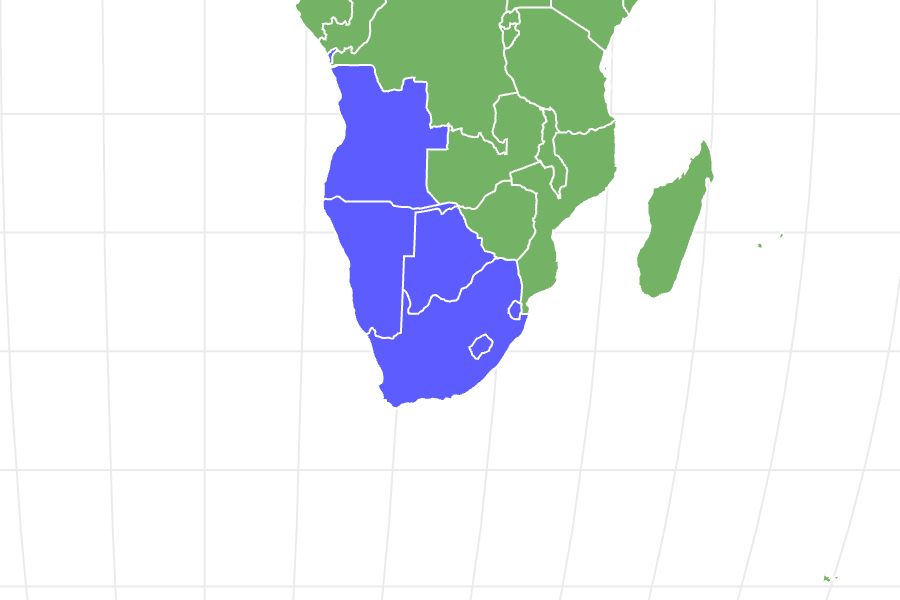 View all of our Springbok pictures in the gallery.

View all of the Springbok images!

The springbok is a medium-sized antelope that roams across the African savanna in massive herds, protected from predators by sheer numbers.

The springbok is among the most well-known and common animals of southern Africa. It fulfills a somewhat similar ecological niche as the deer. But despite its deer-like appearance, the springbok actually belongs to the same bovid family as the sheep and cow. It is a very popular attraction in many of the parks and reserves across southern Africa.

The scientific name of the springbok is Antidorcas marsupialis. This name has nothing to do with the taxonomical group of marsupials hailing from Australia and the Americas. Instead, it comes from the Latin word marsupium, meaning a pocket. This refers to the skin flap that the springbok carries along the back.

The springbok is the sole living member of its genus, Antidorcas, but other species are known from the fossil record. There are three recognized subspecies of springboks, each one representing a different geographical region in which they reside. These subspecies can be identified from each other by their slightly different size and appearance.

The springbok has all the physical hallmarks of an antelope, including the same long body, slender legs, V-shaped head, big ears, and huge, ringed horns that curve out and then inward like a stethoscope. These horns are composed of keratin (the same substance found in hair and fingernails), and unlike deer, they are permanently attached to the head and cannot be shed at all.

The springbok’s most distinguishing feature is the skin fold that extends between the mid-back section and the tail. When opened in times of excitement, this fold reveals a crest of white hair. When it’s closed, however, the crest is completely concealed from view.

Most of the springbok’s body is covered with a short reddish-brown coat of hair, while the face, stomach, and interior legs have a white coat sometimes interspersed with dark stripes or markings. Pure black and pure white springboks are also naturally occurring. These variants can be artificially selected and amplified by ranchers who raise springboks for their fur.

Most springboks are about the size of a large dog. They stand no more than 3 feet at the shoulders and weigh anywhere between 60 and 100 pounds. The ringed horns add another 14 to 19 inches to the height of the head. Both sexes are fairly similar in appearance, but males tend to have larger horns and body sizes than females.

The springbok appears to have some kind of a social hierarchy that revolves around large herds which travel together for protection and mating purposes. These herds typically consist of several females, their youngest offspring, and maybe a few dominant males. The remaining males are usually too young or too old to maintain a dominant status, and so they’re relegated to all-male groups, which wander together in search of mates. Springboks once congregated together into mega-herds of thousands or even a million. Since numbers have fallen, these mega-herds have become much less common.

Springboks communicate with each other through a combination of chemical signals, sounds, and body language. Scent markings are believed to play an important role in communication between members of the same species. The dark markings on the body, which they “flash” at other members, may also serve a similar role in communication. Meanwhile, their sense of vision and hearing helps them survive the harsh life on the savanna. The horizontal pupils, with their wide field of view, are very well-adapted for the purpose of identifying nearby potential predators.

One of the more amazing facts is that springboks engage in a jumping maneuver known as pronking (this is an Afrikaans word meaning “to show off”). Pronking occurs when they leap up to 11 feet in the air with their legs stiffened, back arched, head down, and flap opened to reveal the crest of hair. It’s not quite known why they engage in this behavior, but the most common theory is that the springbok is either raising an alarm or attempting to distract a nearby predator. This allows the other springboks enough time to flee.

The springbok’s behavior is heavily influenced by the surrounding ambient temperature of the air. During the hot months, springboks are typically most active during the dawn and dusk hours, when they spend most of their time searching for and consuming food, and then they rest in shade to avoid the hot sun. During the cooler months, however, their feeding times may shift more toward midday.

The springbok can be found all over the southern savannas and deserts of Africa. The major populations reside in the countries of Namibia, Botswana, and South Africa, where they’re largely confined to farms, parks, and game reserves (including the very popular Kruger National Park). The southern part of Angola has its own separation population.

As an important prey species in its natural habitat, the springbok must always be vigilant for nearby threats. Their relationship with humans is particularly complicated. Over thousands of years, they have historically been hunted for their meat and fur. After the arrival of Dutch settlers, farmers considered them to be a nuisance. Because large herds would disrupt and destroy crops, they were hunted more indiscriminately, which caused population numbers to fall.

More recently, after being confined to private farms and game reserves due to habitat loss, they are hunted in a more responsible manner. A license is now needed to kill a springbok on these lands. The cultivation of springbok meat and fur is actually a big business. Their fur is even exported to different countries, while the meat tends to be consumed locally.

What eats the springbok?

An adult springbok is preyed upon by large predators such as lions, cheetahs, leopards, hyenas, wild dogs, and caracals. The juveniles are also preyed upon by eagles, jackals, and wild cats.

What does the springbok eat?

The springbok is a herbivore; it feeds exclusively on grasses, flowers, and other plant matter. Like other members of the bovid family, the springbok has a complex, multi-chambered stomach to break down tough plant material in its diet.

But its feeding strategies shift between grazing and browsing as the seasons dictate. During the wet season, they consume more grasses. But during the dry season, they browse on flowering plants to obtain both food and water. In fact, springboks derive so much water from their foods that they can sometimes go their entire lives without drinking from springs, rivers, and other large sources of water.

The springbok’s annual mating season can take place at any time of the year, but it usually proceeds from the end of the wet season, when resources are most abundant and the springbok has achieved its peak physical condition. It then enters a period of sexual excitement known as a rut. During this time, rutting males will defend a territory about 62 to 173 acres large from other males. This will give it exclusive access to any females who are in their territory. Its ritualized displays include loud grunting, a show of the pouch fur, and deposits of urine and dung.

After a four- to six-month gestation period, the female will give birth around the start of the next rainy season in October or November. Due to the time and resources needed to raise the young, she will only produce one or two of them at a time. The mother bears most of the responsibility of caring for the calves. She may join a temporary nursery group, independent from the main herd until the calf is fully weaned off its mother’s milk at around four months of age.

Females are already sexually mature after about 200 days. They tend to stay with the same herd of their birth and reproduce every other year. Males, by contrast, only become sexually mature after 400 days. They tend to wander off and form same-sex groups quickly after becoming independent. Springboks seem to have an average lifespan of seven to nine years in the wild; many will eventually fall prey to predatory animals. But if they manage to survive, then some springboks have been observed to live 20 years.

The springbok is currently considered to be a species of least concern by the IUCN Red List. It is estimated that some 1.5 to 2.5 million springboks still roam the savannas of Africa. While numbers did fall in the 19th and 20th centuries, they appear to be rising again, thanks to robust conservation efforts and a renewed interest in this quintessentially South African species. The preservation of land through reserves and parks has provided a natural refuge for the species to roam with limited human interference.

What kind of animal is a springbok?

The springbok is a type of antelope – this is one of many species of even-toed hoofed mammals native to Africa and Eurasia. Antelope is a kind of informal miscellaneous category that brings together several closely related species, including the gazelles, addax, impalas, and wildebeests. Together they belong to the family of Bovidae, which makes them closely related to cattle, sheep, goats, and other bovids. While taxonomists do sometimes make a distinction between a “true antelope” (like the springbok and gazelle) and other types of antelope, the distinction is often murky. Scientists still need to gather more facts about their relationship.

Where do springboks live?

Springboks are endemic to the savannas of southwestern Africa, including the countries of Namibia, South Africa, Botswana, and Angola.

What do springboks eat?

When did the springbok evolve?

The fossil record seems to indicate that early springbok ancestors evolved from a gazelle-like animal some three million years ago.

What are springboks known for?

Springboks are very well-known for their jumping behavior. Jumping appears to occur when the springbok is surprised by a nearby predator.