Male robins are so aggressive and territorial that they will attack their own reflections. 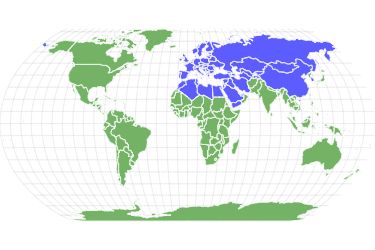 View all of our European Robin pictures in the gallery.

View all of the European Robin images!

This chubby little creature is a welcome sight to farmers and gardeners alike as it loves to eat insects, including insect pests. It also delights with its burbling song, which begins at dawn and may even continue into the night. On the other hand, the European robin is rather thuggish to members of its own species and even other birds. It’s no wonder that several soccer and rugby teams are named after it! Read on for more information about this feisty little bird.

Where To Find the European Robin

The European robin is found in Europe, North Africa, Russia, and parts of the Middle East. It lives in habitats such as gardens, backyards, hedgerows, parks, woods, and heathlands.

Robins are not fussy about where they build their nests. They can be constructed in boltholes or on top of barbecue grills, in old hats and old boots. Robins also appreciate nest boxes, especially those with open fronts that are nicely hidden among shrubs or vines and no more than 6.56 feet off the ground. The female makes the nest out of moss, grass, and leaves and lines it with hair and feathers. It is usually cup-shaped.

The scientific name of the robin is Erithacus rubecula. The genus name, Erithacus is Greek for a type of bird that some historians believe was the European robin. The species name, rubecula is derived from ruber, the Latin word for “red.” There are nine subspecies:

The European robin does not have a red breast. The vivid color on part of its head and breast is orange, but when the bird was named back in the 15th century there was no word for “orange.” Other than this, Erithacus rubecula is a little bird between 4.9 and 5.5 inches long with a 7.9 to 8.7-inch wingspan. It has a short tail, a short beak, and bright, dark, beady eyes. The feathers on the side of its chest and neck are bluish-gray, and its back is a shade of brown. It has a white belly, and its feet and spindly legs are brown. Chicks are speckled brown and white, and their orange breast grows as they mature. Both female and male robins have the same coloration.

Despite belonging to the Aves class, the European robin and the American robin are not closely related to each other. The American robin was given its name because its breast reminded settlers of the bird they’d left behind in England. But there are several differences as well as similarities between these two songbirds.

The American robin, Turdus migratorius is a much larger bird than the European. It grows between 9 to 11 inches long and has a 12 to 16-inch wingspan, which makes it one of the largest of the thrushes. The European robin, on the other hand, is considered a type of flycatcher. The American robin’s breast is entirely covered by some shade of red, its back is brown, and the color of its head ranges from brown to black. Its bill is yellow and has a dark tip, it has a white throat streaked with black, and the abdomen and the coverts beneath its tail are also white. Unlike the European robin, it is native to North America, though some migrants have been found in Europe. People tried to introduce the European robin to America, but the attempt failed.

As its name implies, Turdus migratorius is more of a migratory bird than the European robin, though many American robins found in the United States remain in their range all year.

Both robins are plentiful, and their conservation status is least concern.

The European robin is largely a solitary bird, and it tends to hunt during the day. It will hunt at night if it is exposed to artificial lights or moonlit nights. In the United Kingdom and Ireland, it is fairly tame, as there are taboos against hunting it. It will hang around people or animals that are digging in the soil in the hope that the digging will turn up the worms and other burrowing invertebrates that make up its diet. It is prized for beginning its beautiful song at the crack of dawn. These birds sing all year long and only go quiet during their midsummer molt.

Though it has a sweet look about it, European robins, especially males are territorial and will violently defend their territory. They’ll not only attack other robins but other small birds who come too near. Males have been known to attack their own reflection in a mirror or windowpane. Fights can become so intense that there are places where as much as 10 percent of adult European robin deaths are due to intraspecies combat.

Though most European robins stay in their home range year-round, the ones who live in Scandinavia and Russia migrate to the continent in winter.

The redbreast is largely an insectivore during the spring and summer, but in winter it eats berries, fruit, and seeds. Cold winters are hard on these birds, and it is a good idea to put food out, including suet, mixed seeds, and mealworms during this time.

The robin’s pugilistic attitude can only help it so far when it comes to predators such as domestic cats and dogs, foxes, rodents, and birds of prey. Snakes also take eggs and chicks. Humans who do not live in the British Isles kill them in great numbers as they migrate even though this has not caused a decline in the population. The bird is also subject to parasites such as the moorhen flea and a spiny-headed worm called Apororhynchus silesiacus.

The redbreast starts to breed in March, though couples can start courting as early as January. During this time the male not only defends a territory, puffing out his red breast and singing to challenge other males but feeds the female. She is the one who builds the nest in a place, any place, that provides enough shelter. She can lay as many as three clutches during the breeding season, and she usually lays five to six eggs. She incubates them, and they hatch after 13 days. Both parents feed the chicks.

The chicks finally fledge when they’re about two weeks old, but their father takes care of them while their mother incubates a new clutch of eggs. The lifespan of this bird is only about 13 months, but it has been known to live as long as 19 years.

Does the European Robin Migrate?

European robins who live in the colder part of their range migrate south in the winter.

How many eggs does the European Robin lay?

It lays between five and six eggs.

How fast does the European Robin fly?

It can fly as fast as 35 miles per hour.

What is the European Robin’s wingspan?

When does the European Robin leave the nest?

Are European robins in the US?

There are no large populations of European robins in the United States. They were introduced in the 19th century but failed to become established.

Is the European robin related to the American robin?

The redbreast is a surprisingly aggressive little bird. Males sometimes fight to the death and even a female will vigorously defend her territory.

What are the differences between European and American robins?