The Hoopoe genus is the only living member of its family! Click through all of our Hoopoe images in the gallery. 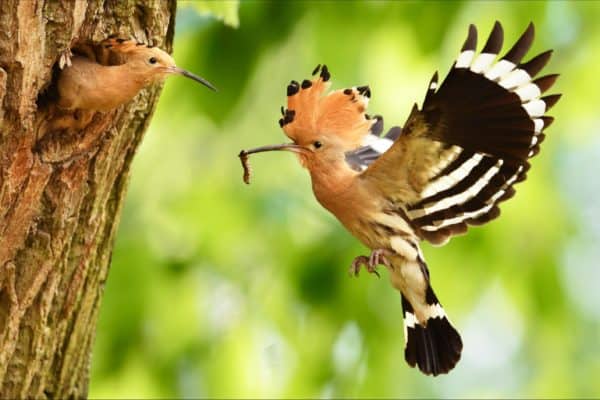 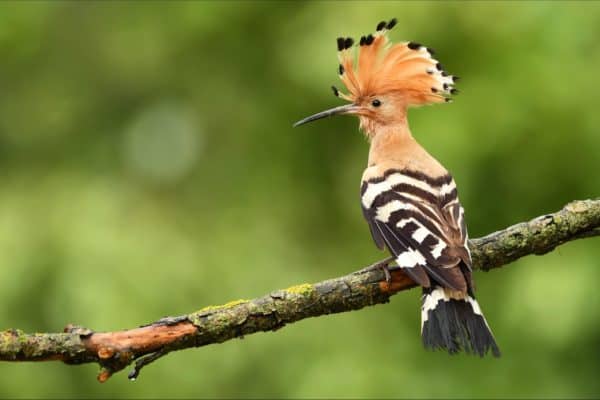 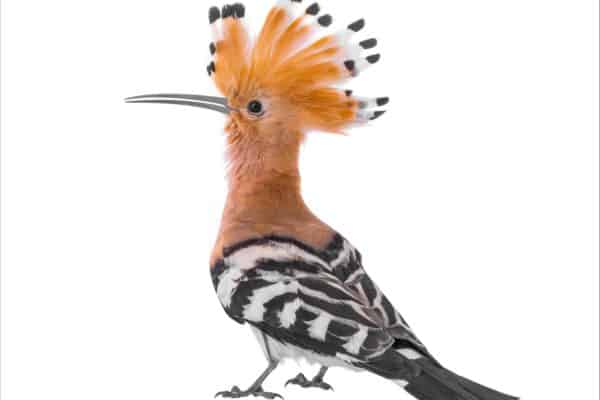 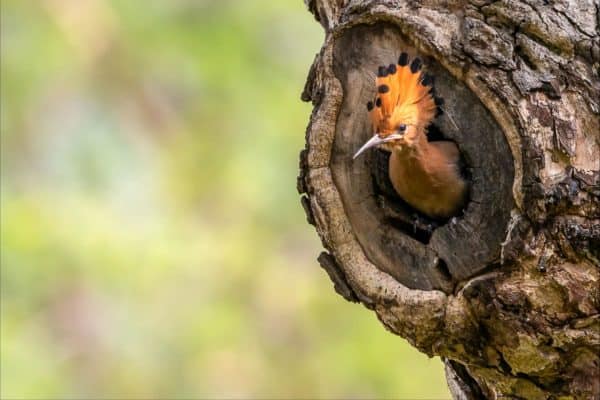 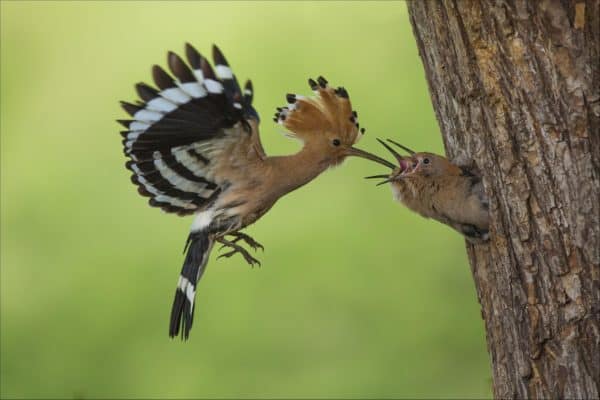 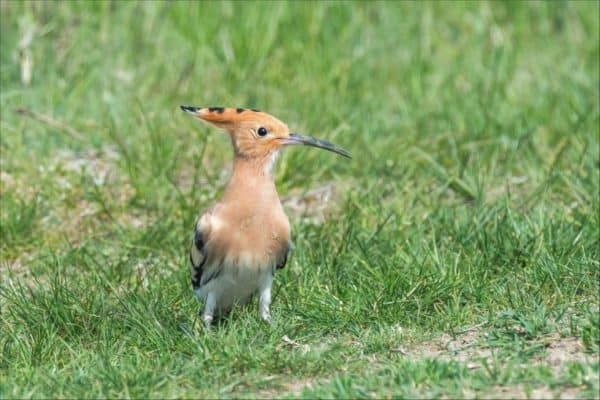 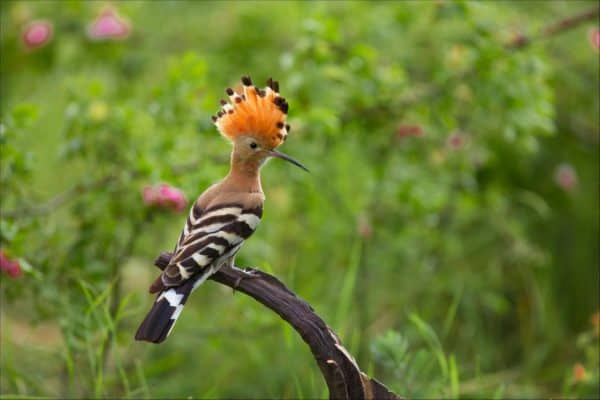 View all of the Hoopoe images!

The hoopoe is a genus of ground-foraging birds with a massive head crest and unusual color scheme.

The hoopoe bird is a common sight throughout most of Europe, Asia, and Africa. When encountered in the wild, the hoopoe bird can be a truly impressive spectacle, despite its smaller size. Its crest of feathers, which resembles a large mohawk, is by far its most eye-catching feature. It serves as an important visual display and communication tool in the wild.

The scientific name for the genus hoopoe is Upupa. The name is derived from the unique vocalization that the bird makes. The taxonomical classification of the hoopoe is the subject of some dispute. There are now generally thought to be three living species in the genus: the African hoopoe (Upupa africana ), the Eurasian hoopoe (Upupa epops), and the Madagascan hoopoe (Upupa marginata).

The African and Madagascan hoopoes were once considered subspecies of the Eurasian hoopoe, but due to physical and vocal differences, they were split off from each other and made their own unique species (although some taxonomists may still classify them together). A fourth species, the Saint Helena hoopoe, probably went extinct at some point in the 16th century.

Upupa is the only living genus of the family Upupidae, so there are few other birds quite like it. More distantly, it is related to the wood hoopoes, the hornbills, and the ground hornbills, which are all part of the same order.

The hoopoe is a small or medium-sized bird that measures between 10 and 12.6 inches long and up to three ounces in weight — or about the size of a book. It has black and white striped wings, a long and thin beak, short legs, and pinkish plumage around the rest of the body.

Perhaps its most distinctive feature is the brightly ornamented crest on the top of its head. The crest is red or orange in color with white patches and black tips. The crest feathers serve an important role in signaling the bird’s mood to other animals. When the bird is calm and relaxed, the feathers rest firmly against the head. But when the bird becomes excited or agitated, then the feathers can be raised to make it appear larger than it is.

Hoopoes have many other fascinating characteristics. For example, they flap their wings in a highly erratic and uneven motion that almost resembles a butterfly more than other birds. They will beat their prey against a surface to kill it and remove any indigestible parts. The animal can also produce chemicals and oils through specialized glands that have a foul smell to discourage predators.

Except for mating and child-rearing, hoopoes are mostly solitary creatures that prefer to hunt and forage on their own. They have only a basic set of calls related to warnings, mating, courtship, and feeding. What they lose in numbers, however, they make up for with several defensive mechanics. One of the most important defenses (apart from the aforementioned chemicals) is the animal’s strong break, which can act as a dangerous weapon against predators or against members of its own species. When fighting for territory or mates, the males (and sometimes even the females) may engage in a brutal aerial duel that could leave one badly injured or maimed.

The seasonal movements of the hoopoes can vary quite a bit depending on their location. The hoopoes of the temperate regions in Europe and Asia will usually migrate to Africa or southern Asia in the winter months after breeding. By contrast, the African hoopoes largely remain in the same territory throughout the year, though they may roam between local areas in search of abundant food sources or in response to seasonal rain. Adults typically begin to molt after the breeding season and continue the process after migrating for the winter.

The hoopoe has a massive range across much of the Eurasian and African continents, except for the most extreme climates of Siberia, the Sahara, and other semi-wastelands. The range of the African hoopoe extends across most of the southern half of Africa from the Congo. The Madagascan hoopoe is confined almost exclusively to the island of Madagascar.

The Eurasian hoopoe is by far the most widespread species. It contains seven distinctive subspecies divided by geographical regions. The epops subspecies extends from Spain in the west to the Pacific in the east and down to the borders of India. The saturata subspecies is found in Japan and southern China. Ceylonensis primarily inhabits the Indian subcontinent. Longirostris lives across much of Southeast Asia. The major, senegalensis, and waibeli subspecies all inhabit different parts of central and eastern Africa.

Hoopoes tend to prefer the forests, savannas, and grasslands throughout the temperate and tropical areas of these regions. They require plenty of open space with sparse vegetation and trees, cliffs, or walls in which to reside. Whereas most bird species construct their elaborate nests in branches, the hoopoe is content with tiny crevices instead.

The diet of the omnivorous hoopoe consists of many different foods, including spiders, seeds, fruits, and even small lizards and frogs. The hoopoe’s most common foods, however, are insects such as beetles, cicadas, crickets, locusts, grasshoppers, ants, termites, and dragonflies.

The bird will forage along the ground and attempt to dig up food from the dirt. If it cannot find food on the ground, then it will pick off flying insects from the air. The strong muscles around the beak allow it to open its mouth when probing for food in the ground. The foraging process involves a lot of work; it will constantly overturn every little rock or leaf in search of small morsels of food.

The hoopoe has only a few natural predators in the wild, including cats and large carnivorous birds. Humans have not traditionally been a significant threat to the survival of the hoopoe.

Because the bird mostly eats pests largely considered an annoyance to humans and our cultivated crops, the hoopoe is extended a degree of protection in many countries. And thanks to its very simple environmental needs and diverse diet, it is also good at adapting to different ecosystems and situations. However, hunting and habitat loss can sometimes put some stress on particular subspecies of hoopoe.

Hoopoes are monogamous creatures that will mate with only a single other bird for the length of the breeding season. Males will attempt to court the female by bringing her a gift of insects on which to feed. As previously mentioned, they will compete fiercely with each other for mates. Once they’ve secured a partner, the hoopoes will mate throughout their normal breeding season.

Females can lay up to 12 eggs at a time. The clutch size is larger with northern species and smaller with species closer to the equator. Females will typically produce one egg per day for as many days as necessary and then immediately start to incubate them. The incubation period lasts 15 to 18 days, so chicks hatch at different times. Females have the responsibility of incubating the eggs, and males gather most of the food.

After laying eggs, the female will begin to secrete a noxious smelling substance similar to rotten meat and rub the chemical into its own plumage and all over its chicks. This substance is thought to deter predators and potentially destroy parasites and harmful bacteria. This secretion will last until the chicks leave the nest. However, the chicks are not exactly defenseless when left on their own. Soon after hatching, they will quickly develop the ability to squirt feces at a threatening animal. They will also strike out with their bills while emitting a hissing sound to scare away predators.

The chicks are usually born with a fluffy white down covering the entire body. They will gain their full set of feathers a month into their lives. The typical lifespan of a hoopoe is approximately 10 years in the wild.

Hoopoe numbers remain robust and widespread throughout most of its native habitat. According to the International Union for the Conservation of Nature (IUCN) Red List, the conservation status of the hoopoe merits the least concern. It is estimated that there may be five to 10 million hoopoes living worldwide. However, the population numbers of the common Eurasian hoopoe may be decreasing slightly.

Because of its widespread distribution across the globe, each subspecies may be facing completely different situations and pressures.

What is a hoopoe?

A hoopoe is a type of medium-sized bird with a thin bill and large crest of feathers on its head. Because of its distinctive characteristics, it is difficult to compare the hoopoe to any other genus or species. Despite its widespread distribution throughout most of Eurasia and Africa, the bird is probably not as well known as many other common birds.

Are hoopoes carnivores, herbivores, or omnivores?

Hoopoes are omnivores that mainly eat insects, but will also eat spiders, seeds, fruits, and even small lizards and frogs.

Is a hoopoe a woodpecker?

Although they look somewhat superficially similar, woodpeckers and hoopoes are actually part of entirely different orders. The woodpecker is part of the order Piciformes, while the hoopoe is part of the order Bucerotiformes. This makes them very distantly related from each other. It’s almost like comparing primates to felids (cats).

Hoopoes are very common in Europe, Asia, and Africa, but some species or subspecies may rarely be encountered by people.

How did the hoopoes evolve?

Because of the scarce number of fossils, the evolution of the hoopoe is not well understood. However, fossilized remains of the closely related wood hoopoe (which occupies a different family) date back millions of years. Paleontologists have also found the fossilized remains of an early hoopoe-like bird, the Messelirrisor, which lived in the forests of Central Europe during the Middle Eocene around 37 to 49 million years ago.

No, the standard color of the crest is almost always pink or reddish-orange. Blue crested variants do not exist.

Are Hoopoes herbivores, carnivores, or omnivores?

Hoopoes are Omnivores, meaning they eat both plants and other animals.

What Kingdom do Hoopoes belong to?

Hoopoes belong to the Kingdom Animalia.

What phylum do Hoopoes belong to?

Hoopoes belong to the phylum Chordata.

What class do Hoopoes belong to?

Hoopoes belong to the class Aves.

What family do Hoopoes belong to?

Hoopoes belong to the family Upupidae.

What order do Hoopoes belong to?

Hoopoes belong to the order Bucerotiformes.

What type of covering do Hoopoes have?

Hoopoes are covered in Feathers.

What type of covering do Hoopoes have?

Hoopoes are covered in Feathers.

Where do Hoopoes live?

In what type of habitat do Hoopoes live?

What is an interesting fact about Hoopoes?

Hoopoes are stunning birds with a stinky way to deter predators!

What is the lifespan of a Hoopoe?

Hoopoes can live for around 10 years in the wild.

What is the Hoopoe's wingspan?

How many Hoopoes are left in the world?

There are between 5 and 10 million Hoopoes left in the world.