Click through all of our Hornbill images in the gallery. 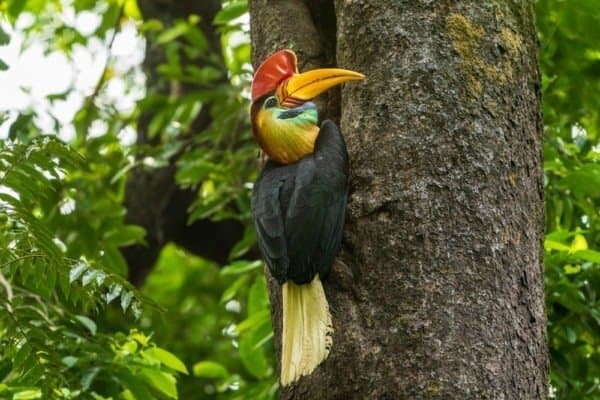 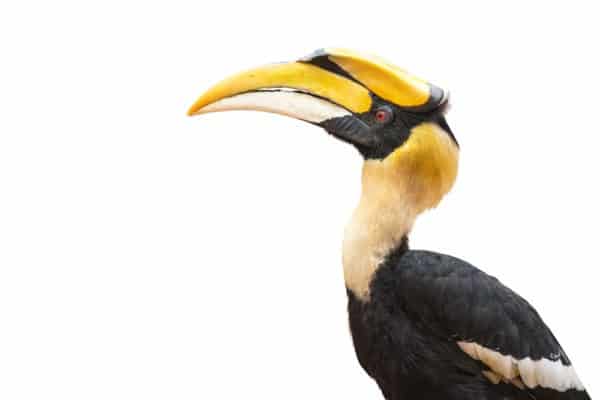 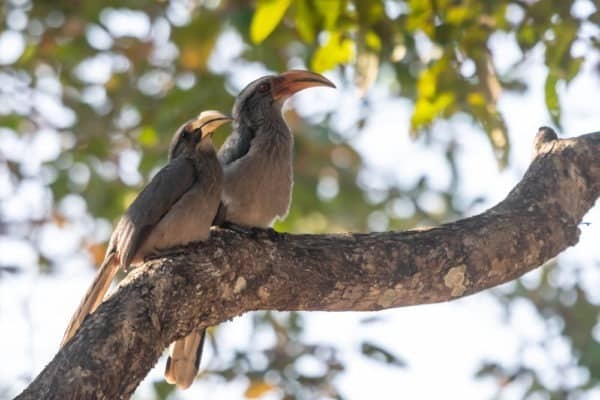 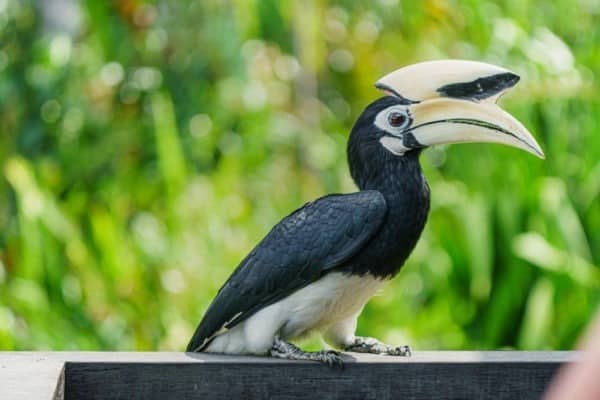 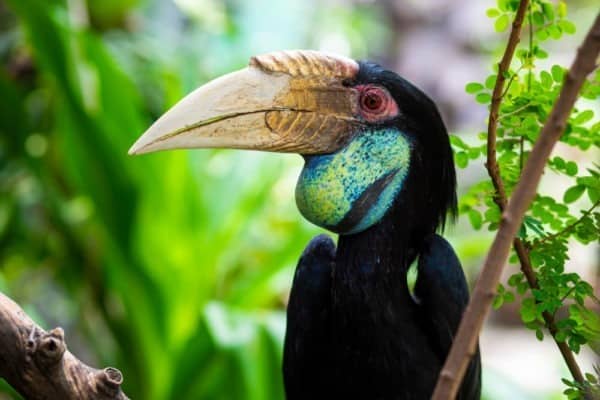 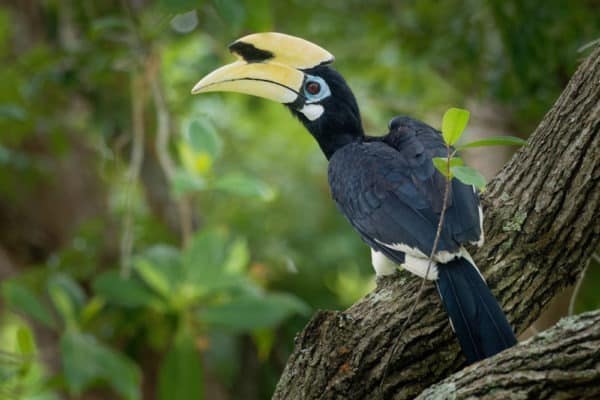 View all of the Hornbill images!

The hornbill is a big, brightly colored tropical bird with a long, curved bill, sometimes adorned with an equally elaborate horn on top.

You might say that the hornbill is a bird of charismatic excess and extremes. Its colors, appearance, vocalizations, and social behavior have sometimes drawn comparisons to the equally elaborate toucans of the Americas. But many facts about its anatomy and behavior still remain poorly understood, and we are running out of time to learn about these unique birds, because habitat loss and overhunting have driven many species to the brink of extinction.

The hornbill is a family of birds that goes by the scientific names of Bucerotidae. This is a combination of two Greek words: bous (meaning head of cattle) and keras (meaning horn). If you put the two words together, then you get buceros, which means horns like the cattle. This is a reference to the large horn that adorns the head of many species.

This bird’s classification is still a matter of debate. Some taxonomists classify the ground hornbill in its own separate family of Bucorvidae or within the same family as the arboreal hornbills. Another point of dispute is the order to which it belongs. Some taxonomists put hornbills and the closely related hoopoes in the order of Coraciiformes with the kingfishers and bee-eaters. Other taxonomists place them in a separate order called Bucerotiformes. Either way, the facts remain that nearly 60 species are currently recognized. Some of the most well-known include the great, the rhinoceros, the Indian grey, and the African red-billed hornbills.

This creature has a very unusual appearance that sets it apart from anything else. This includes a large head in proportion to body size with broad wings, prominent eyelashes, and a long tail. The plumage is a brown, grey, or black color mixed in with white markings. This is often combined with a brightly colored arrangement of red, orange, blue, or yellow around the neck or head. Some species will actually enhance the colors of their bills by rubbing them against the preen gland beneath their tails. This has the effect of “dying” the bill a rather bright red or orange color.

By far the most prominent characteristic is the presence in some species of a large helmet or horn on top of the bill known as a casque. This structure is composed of keratin, the same substance as nails, hair, and horns. Part of the hornbill’s unusual body shape is due to the fact that two of the neck vertebrae are fused together to support the enormous weight of the head, bill, and casque.

The hornbill ranges in size between 19 inches and 63 inches. The southern ground hornbill is the largest species in the family with some individuals reaching up to 13.6 pounds. The lightest is the redbilled dwarf hornbill. The female of this species weighs a mere 3 to 4 ounces. The helmeted hornbill of Borneo takes the crown for the heaviest casque in relation to body size. It makes up a full 10% of the bird’s total weight. In most species, the female has a much smaller casque and body size compared to the male.

The hornbill is a very noisy bird that announces its presence with a diverse range of calls, including bellows, cackles, and brays. It is believed that the casque is a hollow chamber that serves the purpose of amplifying the sound of the voice. The deep, booming sound this creates is sometimes mistaken for the voice of a lion. Their wings also make a loud chuffing noise while in flight.

Because the male tends to have a larger casque, it is believed that the horn may serve a secondary role as an important sexual signal in the breeding season. The size and brightness of the casque is a mark of health and vitality to other hornbills. In some species, males fight by “jousting” with their bills in the air.

The hornbill is a social animal that gathers in large flocks for protection, mating, foraging, and hunting opportunities. These flocks sometimes consist of more than 100 individuals. Hornbills rise with the sun and begin the day by preening or calling to their neighbors. Then they leave the nest to forage for food in pairs or small groups. Self-care is an important aspect of its behavior. Several species have a specialized preening gland that produces an oily secretion to assist with cleaning. The hornbill will also run its bill against a branch or bark to clean it.

Some hornbills have a reciprocal relationship with other species. The eastern yellow-billed hornbill will work with the dwarf mongoose to gather food. It will keep a lookout for potential predators while the mongoose stirs up insects for the bird to consume.

The hornbill is a tropical bird that resides in much of the sub-Saharan Africa, India, the Philippines, and the Solomon Islands. The preferred habitat of the arboreal hornbills includes rainforests and woodlands, while the ground-based hornbills largely reside in the open savannas.

According to the IUCN Red List, population numbers appear to be in sharp decline across the entire family. This ranges between the critically endangered Rufous-headed hornbill, which has no more than 2,500 mature individuals remaining in the wild, and the vulnerable great hornbill, which has 13,000 to 27,000 mature individuals left. On the more positive side of the spectrum, the red-billed hornbill of Africa and the Indian grey hornbill are both species of least concern.

In order to rehabilitate numbers, governments and conservation organizations will need to work together to protect existing habitats and curtail illegal hunting. Some organizations are also rearing hornbills in captivity to bolster numbers.

The hornbill is an omnivorous bird that feasts almost exclusively on fruit, insects, or other small animals. The bill has the ability to pluck fruit from the trees, and the end of the bill has sharp notches for tearing apart food. Their bodies are also very efficient at extracting limited proteins from fruit.

The hornbill is constantly on the lookout from surprise attacks by birds of prey (in particular, the eagle and owl). It is usually well-protected in the middle layers of the canopy from climbing predators below and aerial predators above. However, habitat loss from logging and agriculture is a serious threat to the hornbill’s survival, because most species depend on the trees for all of their needs. Humans have traditionally hunted the hornbill for meat and medicine, but more recently, the intensity of hunting has increased because the casques are incredibly valuable on the international market.

This is a monogamous species of bird that pairs up with a single mate for most of their remaining lives. Because of the intense nature of their relationship, the pair’s courtship is no simple or expendable fling. It involves a complicated set of ritualistic behaviors such as bill contact, vocalizations, and playful chasing. The male also brings food to his mate throughout the year as a demonstration of his commitment to the relationship. The number of offspring they produce together depends on the size of the bird. Smaller species can produce up to seven eggs at a time, while larger species produce only one or two.

The female lays the eggs several days apart, creating a staggered pattern to their hatching. She is quite vulnerable during this time because her molting renders her unable to fly. However, the male has the amazing ability to protect the mother and the chicks by covering the cavity in walls of mud. It will then pass food to the female through a small hole in the wall while she is incubating the eggs. The only type that does not engage in this behavior is the ground hornbills, which nest in unsealed holes, logs, or rock faces on the ground.

The mother will incubate the eggs for 23 to 96 days. When the eggs finally hatch, she will emerge from the mud-covered hole and leave her offspring behind. These tiny chicks (which weigh no more than a few ounces even in the largest species) will compete with each other for limited food resources. The oldest sibling has the best chance of surviving, while the other siblings are sometimes left to starve. While this may seem like a cruel strategy, it does ensure there are backup chicks in case the oldest one dies.

Hornbills in the Zoo

This species is one of the most popular tropical bird exhibits in the United States. The San Diego Zoo has a long history with the hornbill that stretches all the way back to 1951. Between the zoo and the safari park, it now claims to house almost 30 species and has hatched more than 520 chicks.

If you don’t live in the San Diego area, then there are still plenty of opportunities to see this magnificent bird in person. The Saint Louis Zoo, San Francisco Zoo, and the Denver Zoo are home to the aptly named great hornbill of Southeast Asia. The Indianapolis Zoo contains both an eastern yellow-billed hornbill and a southern ground hornbill, while Zoo Atlanta also has a southern ground hornbill. The Nashville Zoo, Minnesota Zoo, and Zoo New England are all participants of the Rhinoceros Hornbill Species Survival Plan, which is committed to the survival and rehabilitation of the species. Finally, the Smithsonian’s National Zoo has an Abyssinian ground hornbill, and Zoo Tampa has various hornbill species in its aviary.

What is a hornbill?

The hornbill is a family of tropical birds that reside almost exclusively in trees (except for a few ground-based species). The massive head, bill, and horn are all common features of this family. It includes both African and Asian varieties.

Hornbills pose no known danger to humans. If disturbed, they prefer to run away.

Every species of hornbill is capable of flight, even the ground-based hornbills.

How many hornbills are left in the world?

Population estimates tend to range between a few thousand and tens of thousands of mature individuals per species.

What is the lifespan of a hornbill?

The typical hornbill can live up to 40 years in the wild and even longer in captivity.

Are Hornbills herbivores, carnivores, or omnivores?

Hornbills are Omnivores, meaning they eat both plants and other animals.

What Kingdom do Hornbills belong to?

Hornbills belong to the Kingdom Animalia.

What phylum do Hornbills belong to?

Hornbills belong to the phylum Chordata.

What class do Hornbills belong to?

Hornbills belong to the class Aves.

What family do Hornbills belong to?

Hornbills belong to the family Bucerotidae.

What order to Hornbills belong to?

What type of covering do Hornbills have?

Hornbills are covered in Feathers.

Where do Hornbills live?

Hornbills live in the tropical regions of Africa, Asia, and the Pacific Islands.

In what type of habitat do Hornbills live?

What are some predators of Hornbills?

Predators of Hornbills include owls, eagles, and humans.

What is the average litter size for a Hornbill?

The average litter size for a Hornbill is between 1 and 7.