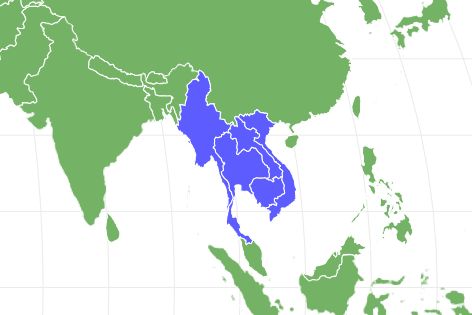 View all of our Indochinese Tiger pictures in the gallery.

View all of the Indochinese Tiger images!

“Every Indochinese tiger has its own pattern of stripes, so no two tigers are exactly the same”

Indochinese tigers live in the southeastern part of Asia. They have a coat of orange or gold featuring a pattern of black stripes. This tiger lives alone and stays hidden most of the time. They can live to be 15 to 26 years old in the wild.

• They are nocturnal and hunt at night

• The Indochinese tiger is on the endangered species list

• A male Indochinese tiger can weigh up to 430 pounds!

The Indochinese tiger is this animal’s common name while its scientific name is Panthera Tigris Corbetti. The word Panthera means leopard and the word Tigris is Latin for tiger. In addition, the word Corbetti refers to a British man named Jim Corbett who was a hunter turned conservationist of Indochinese tigers. This tiger belongs to the family Felidae and class Mammalia.

As a quick comparison, these tigers are smaller than a Bengal tiger, but larger than a Malayan tiger. The Indochinese tiger and the Malayan tiger were once thought of as the same subspecies. But, in 2004, it was officially stated that these two tigers are different subspecies.

These tigers have a coat of orange or gold with black stripes. Their fur color helps to keep them hidden in the forest when hunting for food. The stripes on a tiger blend in with the shadows in a rainforest making it hard to see these big cats. This tiger also has white fur on its stomach, face and a ruff of white hair on its neck.

This big cat has powerful yellow or light-colored eyes that allow it to see perfectly in the dark as they hunt at nighttime. Plus, they have excellent hearing which also helps them to detect prey such as deer, wild boar, and even monkeys.

These tigers have long claws that are retractable. This means the tiger can pull its claws back into its paws when it doesn’t need them. These claws allow a tiger to hold onto the bark while safely climbing a tree.

The strong back legs of this tiger allow it to easily jump onto high tree branches, swim and chase prey. This tiger can run at speeds up to 60 miles per hour. So, the running speed of this tiger is almost as fast as a baseball pitcher’s curveball.

These tigers are solitary animals. The only time you’ll see a few of these tigers together is when mothers are taking care of cubs and during mating season.

These tigers are shy and like to stay hidden from sight. But, a male will become aggressive to another male tiger entering its territory, especially during mating season. Have you ever seen a cat in your neighborhood scratching the bark of a tree? This is one of the ways a cat (including these tigers) mark their territory as a signal to other cats to stay away.

Indochinese tigers live in the southeast area of Asia. Specifically, they live in Cambodia, Laos, Thailand, Vietnam and Myanmar. They live in a tropical climate in rainforests as well as on grasslands and in the mountains.

These tigers migrate to areas located higher in the mountains to find food if prey is scarce in their current territory.

What do Indochinese tigers eat? These tigers are carnivores. The type of meat they eat depends on what’s available in their territory. Sambar deer, serow (a goat-like mammal), wild boars and banteng (wild cattle) are all common prey for this tiger. However, if there is a shortage of these animals, an Indochinese tiger’s diet can include monkeys, hog badgers and even porcupines!

Indochinese tigers don’t have any animal predators. Humans are there only predator. Some people hunt these tigers for sport or for their fur, claws or meat. Some types of ancient medicines are made using parts of this tiger.

Habitat loss is another threat to Indochinese tigers. Areas of the forests they live in are being cut down and cleared. This area is being devoted to extending roadways and creating more farmlands.

The conservation status of this tiger is Endangered. To help protect this tiger, there are laws against hunting it. The punishment for poaching Indochinese tigers can be years in prison. Also, over 60 of these tigers are being kept in zoos to protect them and increase their population.

The mating season of Indochinese tigers falls between November and April. When female tigers are ready to mate they release a scent to alert male tigers. Also, females make growling or purring noises as a way to attract males. It’s not uncommon for two males to fight over one female. The strongest one will win and mate with the female.

A female Indochinese tiger is pregnant for about 16 weeks. She gives live birth to between 2 to 6 cubs. Each cub weighs around 2 pounds. Once the female is pregnant, the male tiger leaves the expectant mother.

Baby Indochinese tigers are known as cubs. They are born blind and helpless in a den. A cub’s eyes don’t open for about 6 to 12 days after its born. The mother tiger nurses her cubs until they are about 6 months old. After that, she teaches her cubs how to hunt for food and brings them some of the prey she captures. A mother tiger is very sensitive to the safety of her cubs. If she senses that her cubs are in danger, she will move them to another den or area to keep them away from predators.

At about 18 or 24 months, the cubs are old enough to leave their mother’s den and go out on their own. In 2 or 3 years, they will begin having their own cubs.

As Indochinese tigers age they can experience vision problems which can lead to a lack of nourishment because they aren’t able to catch their prey. Plus, if an older tiger fall sick or is injured, it is vulnerable to attacks from other tigers in the area.

The conservation status of the Indochinese tiger is Endangered. The population is decreasing due to habitat loss and poaching.

View all 27 animals that start with I

These big cats are carnivores. They eat deer, wild boars, wild cattle, monkeys and porcupines. Indochinese tigers hunt for prey at night. So, it makes sense that most of the animals these tigers eat are also active at night.

How many Indochinese tigers are left in the world?

It’s believed there are around 350 Indochinese tigers left in the world. This low population is due to poaching and habitat loss. When a tiger loses its home environment, it also loses its food source. Plus, female Indochinese tigers have an average of 3 cubs per litter, so it takes a long period of time to build up the population of the species.

What eats the Indochinese tiger?

This tiger has no animal predators, but they are sometimes eaten by humans. They are killed and sold for food or to make ancient medicines.

Why is the Indochinese tiger endangered?

Where does the Indochinese tiger live?

These tigers live in southeast Asia in Thailand, Laos, Myanmar, Cambodia and Vietnam. They live in tropical rainforests, grasslands and the mountains.

What Kingdom do Indochinese Tigers belong to?

What phylum do Indochinese Tigers belong to?

What class do Indochinese Tigers belong to?

What family do Indochinese Tigers belong to?

What order do Indochinese Tigers belong to?

What genus do Indochinese Tigers belong to?

What type of covering do Indochinese Tigers have?

Indochinese Tigers are covered in Fur.

What is the main prey for Indochinese Tigers?

What is the average litter size for an Indochinese Tiger?

The average litter size for an Indochinese Tiger is 2.

What is an interesting fact about Indochinese Tigers?

Indochinese Tigers are now thought to be extinct in China!

What is the scientific name for the Indochinese Tiger?

The scientific name for the Indochinese Tiger is Panthera Tigris Corbetti.

What is the lifespan of an Indochinese Tiger?

Indochinese Tigers can live for 18 to 25 years.

How fast is an Indochinese Tiger?

An Indochinese Tiger can travel at speeds of up to 60 miles per hour.

How to say Indochinese Tiger in ...