There are many different types of banana spiders, or perhaps many spiders are referred to as banana spiders by both novices, and even expert scientists. Banana spiders in Georgia are orb-weaving spider species, otherwise known as golden silk orb-weavers or golden silk spiders.

Recognized by the golden color of their silk and asymmetrical circular webs, these banana spiders inhabit and spin their webs in forests and wooded areas in the Southern region of the United States, including Georgia. Females of this species are large and excellent web-builders, utilizing seven types of silk glands to produce their large golden webs. Just how big are these spiders?

Banana spiders, also called golden silk orb-weavers (Scientific name: Trichonephila clavipes), are the only spider species of the genus Trichonephila native to both North America and South America. Here’s what you should know about these spiders:

How to Identify Banana Spiders

Like almost all orb-weaver species, Trichonephila clavipes exhibit distinct sexual dimorphism in both body size and coloration. The female banana spider has a larger size and very noticeable color pattern, making it relatively easy to recognize. Its long cylindrical abdomen is yellowish to orange-brown with a silvery white cephalothorax and two rows of small white-yellow (or silvery) spots. It also has dark yellow/orange and brown bands on its legs. However, three of its four pairs of legs (the first, second, and fourth leg pairs), contain black hair brushes near the joints, which is also an identifying feature of this spider.

Meanwhile, male banana spiders have a less complex color pattern, consisting of a dark brown, slender body. Their legs contain a black band near the end of the joints, the same areas where the black hair tufts are present on the female. Their inconspicuous small bodies make them very easily unnoticed, if not because they are often found sitting in the webs of females.

How Big Do Banana Spiders Get?

Female golden silk orb-weavers (also known as banana spiders) are some of the largest non-tarantula spiders in North America and possibly the largest orb-weaver species native to the United States. They can grow as big as 0.95 to 1.57 inches (24 mm to 40 mm) in length when fully developed. Some large females measure up to about 2 inches (50 mm) by the end of the season. On the other hand, males have a more slender build and are much smaller, at approximately 0.23 inches (6 mm) in length – about ⅓ to ¼ the size of females. Also, their body mass is roughly between 1/30th and 1/70th that of a large female.

Banana spiders occur predominantly throughout the southeastern United States, across Georgia, Florida, and the Gulf States, through north to North Carolina, south to Central America and South America, and less abundantly as far south as Argentina and far north as Eastern Canada. Other larger relatives of this species occur in Madagascar, South Pacific, and Southeast Asia. These spiders may range more widely in the summer and fall seasons but cannot withstand the winter.

As its name implies, the silk produced from the silk glands of the golden silk orb-weaver usually has a golden color. A yellow pigment in the silk gives it a rich, golden glow in suitable lighting, which makes it visible to the naked eye. Mature female banana spiders construct large, vertical, asymmetric circular (“orb”-shaped) webs, often 1–2 meters in diameter. Given its large size, the web is easily damaged by large flying birds, bugs, or debris; therefore, it needs to be repaired and rebuilt constantly.

The strong web serves as a barrier to protect the female from predators. Besides, one or two small male orb-weavers may be found sitting in the female’s web. Typically, the finely meshed webs of these banana spiders are found most frequently in open woods or edges of dense forest, along forest trails and watercourses, or attached to trees and low shrubs. Due to their prevalence in forests, they’re often walked into by unsuspecting hikers. Although they may also spin much higher on the tops of trees or between the wires of utility lines – in fact, one individual was recorded to spin her web at the corner of a structure 65 feet from the ground!

The primary diet of banana spiders consists of insects ranging from small to medium-sized flying insects such as grasshoppers, bees, flies, small moths, wasps, and butterflies. They also feed on dragonflies and small beetles. These spiders incapacitate prey by injecting them with venom. As the prey gets entangled in the strong web, the banana spider wraps it in silk like a casing.

Are Banana Spiders in Georgia Dangerous?

As is typical with most spiders, banana spiders are not aggressive towards humans, so there’s hardly any danger from encountering this species. These spiders will only bite in self-defense if you go out of your way to provoke them by picking them up, handling them roughly, or pinching them. The bite produces a relatively harmless venom that causes temporary localized pain and slight redness in humans. Generally, the bite of a banana spider is described as much less severe than a bee sting, so they do not threaten healthy humans. 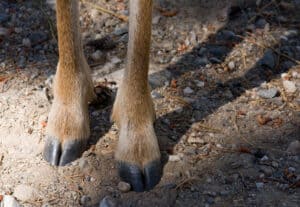