Click through all of our Marble Fox images in the gallery. 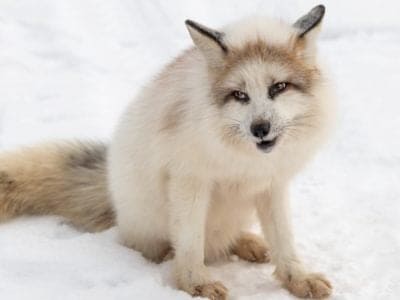 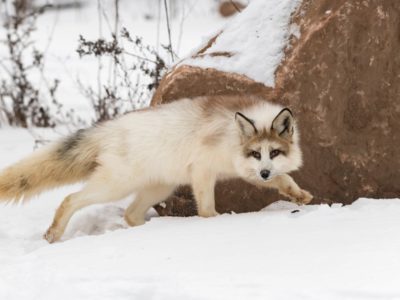 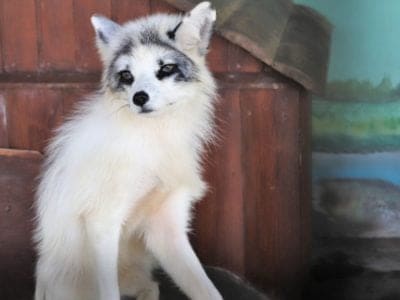 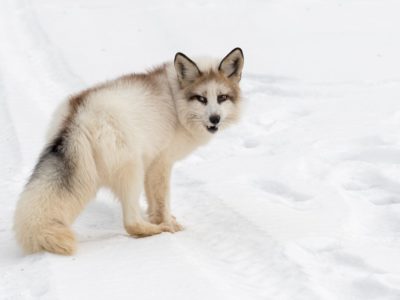 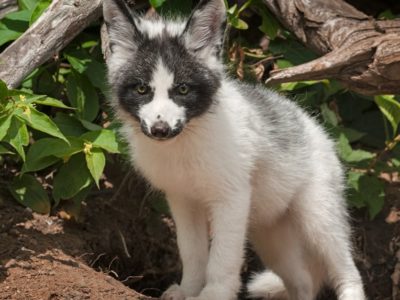 View all of the Marble Fox images!

Misconceptions about the rare Marble fox still flourish and abound.

Despite its unusual appearance, the marble fox is not a separate species at all. It’s really just a common wild fox with a unique black and white coat of colors, artificially selected by humans. It’s actually believed that the marble fox arose from a crossbreed between a red fox and a silver fox (which itself is just another color morph of the red fox). Some sources claim it has Arctic fox lineage as well, but this information is difficult to confirm. This fascinating color morph came about as a result of random genetic change that was then selected by a human breeder, possibly as far back as 1945. They are primarily raised and bred in a domestic setting for their commercial value.

The marble fox does not currently have a separate scientific name. It is a member of the genus Vulpes (which simply means fox in Latin). The red fox, Arctic fox, and fennec fox are all members of this same genus.

Marble fox crossbreeds are primarily known for their unique coat colors. This predominantly white fur is accentuated with gray, black, silver, or brown markings around the eyes and forehead. These markings sometimes run down the entire length of the back and tail as well. Otherwise, they bear all the hallmarks of a traditional fox, including the erect, pointed ears, the long body, the long snout, and the big, bushy tail.

The marble fox is generally smaller in size compared with the red fox. A male weighs up to 21 pounds and stands around two 2 feet tall, while the female is generally much smaller in size, weighing around 8 pounds or so. This is about the size of a small to medium dog.

Despite the fact it was artificially bred by humans, the marble fox is not a domestic animal. Whereas the domesticated dog has had many of its aggressive instincts bred out, the marble fox has all of the behavioral quirks and characteristics of a wild fox. And like any wild animal, this means it would be very difficult to keep them as a pet without understanding and planning around many of their wild instincts.

The marble fox is a solitary animal that, in its natural habitat, would live and hunt alone or in small family units; it does not form a pack like other members of the canine family. But nevertheless, these are highly expressive animals that do have the ability to communicate with each other through facial expressions, vocal calls, and scent markings. Foxes have glands around the tail, face, and pads of the feet to give important signals; they also pick up information about each other through urine, feces, and secretions. In addition, more than two dozen different calls, including the familiar yips and whines, have been identified. These help to convey the fox’s emotional state and other important information about the world.

In the wild, the fox maintains its own extensive territory a few square miles large. This range is occupied by an adult male, one or two adult females, and their offspring. Underground dens, which are connected to resting sites, food storage areas, and hunting grounds through an intricate network of paths and tunnels, provide the natural home for most foxes. These are either dug by the fox directly or taken over from another animal. The foxes usually come out of the den at night or during twilight hours to hunt for prey. Once raised in captivity, however, the fox’s natural living arrangement is disrupted or curtailed, so they do not necessarily exhibit these behaviors.

People have often said that foxes exhibit a combination of dog-like and cat-like characteristics and behaviors. This is certainly reflected in its speed and agility; it can run 30mph and leap about 10 feet into the air. Combined with its excellent digging ability, the marble fox can be quite an escape artist in a domestic setting unless properly watched over or restrained.

The marble fox is not a naturally occurring variant, at least in any common sense; instead, it’s bred and raised in captivity by people all over the world. The name Canadian or Arctic marble fox to which it’s often referred introduces an element of confusion. It’s not particularly Canadian, although it does resemble an Arctic fox.

In the wild, foxes are found in a wide range of different locations, including forests, deserts, mountains, tundra, and even urban areas. The marble fox’s wild ancestors are common throughout the Northern Hemisphere. They were also introduced into Australia by humans.

Since the marble fox is raised by people, it does not have any serious threats or predators, except when it’s occasionally been used as a source of fur.

What eats the marble fox?

In the wild, the fox is preyed upon by eagles, coyotes, wolves, bears, and mountain lions. In its artificial setting, however, the marble fox does not have any predators.

What does the marble fox eat?

In the wild, the fox’s natural diet would consist of small rodents, birds, reptiles, insects, and even sometimes fruits and vegetables. In captivity, they are usually fed cooked or processed meat. Hunting for prey is often discouraged by people.

In the wild, monogamy seems to be the fox’s default mating behavior; a single male and female will pair up to raise the young. But sometimes if circumstances permit, the male will surround himself with multiple female mating partners. He may also sometimes keep around a non-breeding female who helps to raise the young.

Breeding usually begins in the winter or spring, though the female is only in estrous for a few days all year long. Once she has successfully mated, the female will produce an average litter of four to six young baby kits a month or two later. They are born completely blind and helpless, dependent on the adults for support. Both the mother and father and sometimes even the older offspring will coordinate care together. The father will provide food but does not usually enter the maternity den.

The baby kits first open their eyes about two weeks later, which marks the beginning of their drive toward independence. In the wild, they will first leave the den at four or five weeks old but continue to remain with the mother until the end of the fall. Of course, when they’re raised in captivity, the young baby kits are sometimes taken from the mother early and socialized among humans. Wild foxes have an average lifespan of only about three years. Their lives are often cut short by predators and diseases. But when they’re free from these threats, they can live up to 15 years in captivity.

The number of marble foxes currently alive is not known. Nearly all individuals are privately owned and scattered across locations all around the world. Since this is not a naturally occurring animal or a recognized species or subspecies, its status is not tracked by any of the major conservation organizations.

Marble foxes are essentially omnivores, but the bulk of their diet consists of meat, which they sometimes supplement with fruits and vegetables.

What is a marble fox?

A marble fox is an artificially selected crossbreed between two different types of wild foxes to produce a marble coat of black, white, and sometimes brown fur. These coat colors are not naturally occurring in the wild, or at least they’re so rare as to be negligible. The evidence suggests that it probably descended from the red fox, which is very common throughout the entire Northern Hemisphere. Despite being bred and raised in an artificial setting, many of their wild instincts are still intact.

Can you have a marble fox as a pet?

The marble fox is often raised and sold as pets, but not all states or countries permit their ownership.

While this variant only exists through artificial breeding, the marble fox is still considered to be an exotic pet, because few of the natural instincts have been bred out of it. This is reflected in its rather skittish and unpredictable behavior. Owners should understand the risks before they bring home a marble fox. First, and most obviously, the fox will need plenty of exercise, daily cleaning, and attention from its owner. Otherwise, the fox could become anxious and destructive. Second, it will need to be trained and socialized extensively to adapt properly to its domestic environment. Even then, its instincts may suddenly kick in and override some of its training. Owners will take a risk by keeping the fox around other pets, since incidents, unfortunately, do occur. Finally, spaying or neutering is recommended to curb their reproductive instincts, but it’s not a good idea to remove the fox’s fangs or scent glands. This might only serve to diminish its quality of life.

How much does a marble fox cost?

The cost of a marble fox can range anywhere between a few hundred and a few thousand dollars. Only a few specialized breeders actually raise marble foxes, but they are worth the cost and effort to find. Illegal and disreputable breeders should not be trusted.

Can I legally buy a fox?

Many European countries, including France, Germany, and the United Kingdom, allow for the sale of foxes. In the United States, laws on exotic pet ownership are determined by state, which generally falls into three categories. Fox ownership is outright banned in several states, including Texas, New York, California, and Oregon. Then there are three states that explicitly allow people to keep foxes as pets: Indiana, Alaska, and Arkansas. The remaining states require a permit to purchase and own a fox. If you’re unsure about the legal status of owning a fox, then you should consult an expert or check the laws of your local state or country.

Marble foxes are, in fact, descended from red foxes, but they’re not recognized as a specific variant or color morph in the way a silver fox or a platinum fox is.