There are 2,500 known species worldwide! 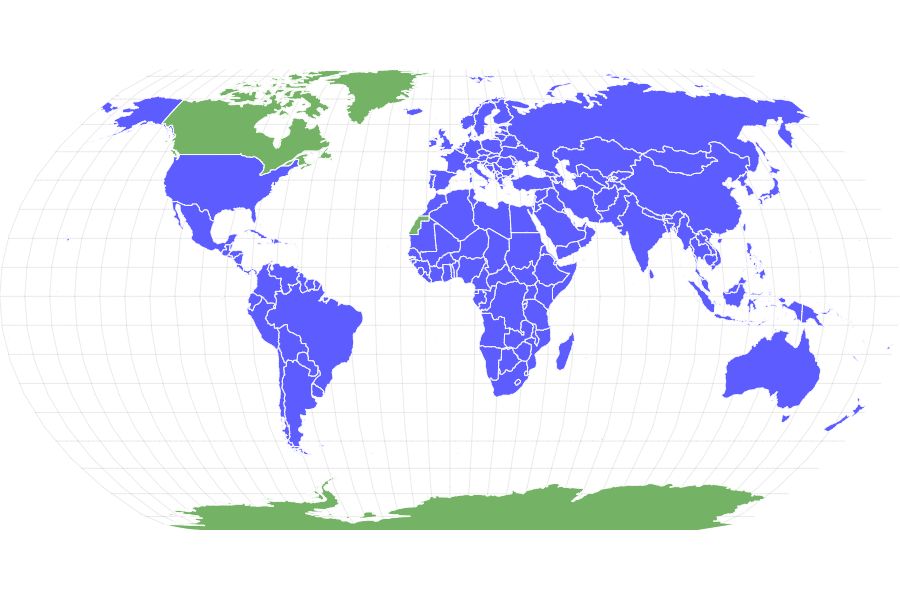 View all of our Mayfly pictures in the gallery.

View all of the Mayfly images!

Mayflies are aquatic insects that get their name from the fact that the adult appears in May. Mayflies hatch out in large numbers in the spring but continue hatching until fall. Since the adult mayfly’s purpose is to reproduce, it has a short lifespan. Mayflies are beloved and celebrated creatures. There have been poems and books written about mayflies, and even festivals are named after this insect with a brief lifespan.

There are as many as 3000 species of mayflies with 700 species living in North America. Except for the Arctic and Antarctica, mayflies exist throughout the world. When mayflies swarm near freshwater habitats, the gathering can be so dense that it can be hard to see when driving.

The scientific name for the Mayfly is Ephemeroptera, which comes from the Greek language and means “short-lived.” Mayflies emerge in large groups but have short lifespans. Other names for the mayfly include the dayfly, drake, fishfly, sandfly, and shadfly. Fishfly is a popular name for the mayfly.

Adult mayflies have large eyes and short antennae. A mayfly’s slender body makes the eyes seem more pronounced, which is why they are described as “bug eyes.” Mayflies have pairs of large clear triangular wings with vertical and horizontal veins that give them a delicate netlike appearance.

The mayfly’s wings are similar to butterfly wings in how they are attached to the insect’s thorax. The mayfly’s larger wings are at the front of the body and with small round wings behind. The tiny hind wings on some species can be challenging to see, and some appear to have no hind wings. The mayfly has two or three tails that look like threads. The tails can be longer than the insect’s body. Mayflies vary in color and size, but they tend to blend in with their background.

The different colors and sizes of mayflies seen in an area are the result of different species inhabiting a single water source. However, the mayfly is one of the easiest aquatic insects to identify because of its large eyes, slender body, and threadlike tails. The mayfly can range from one-tenth of an inch to just over an inch or three centimeters long–about the size of a quarter.

Mayflies sometimes emerge in such large numbers that they cover light posts, trees, and tall grasses, making them nuisances around homes and businesses. Swarms of mayflies can be so large that they appear on Doppler weather radars.

Most mayfly nymphs or naiads live in streams with clear, shallow water, but some reside in still waters and around the edges of lakes. As naiads age, they start to develop gills. Naiads that live in still waters have larger gills, and those living in moving streams have smaller gills. Naiad’s gills control water flow, salt, and oxygen intake. The gills also deflect water at angles, which can mislead predators because it makes the naiads harder to track.

Nymphs can live for several months and then emerge from the water as adults. Seeing mayflies around streams can be a sign of good water quality since a naiad’s gills are vulnerable to polluted waters. When large numbers of mayflies hatch near bodies of water, that can be reassuring because it indicates that the habitat is environmentally sound. Efforts by communities to keep rivers and streams clean ensure the existence of mayflies.

Mayfly naiads feed on algae, microscopic sea organisms, organic matter consisting of leaves and decaying animals, and plants. Once a mayfly gets its wings, it can no longer feed. Also, adult mayflies have no mouths, so they are unable to eat. Like any creature that needs food to live, mayflies could not live long without eating. Food is not an issue for the adult since it dies within hours or days after emerging.

Trout and other fish consume mayfly naiads as food. Mayfly naiads are also the food choice of birds, flies, frogs, parasitic roundworms, and water beetles. Caddisfly larvae and snails may eat the eggs of mayflies. Birds, dragonflies, fish, and water beetles eat mayflies that are in the early adult stage. When mayflies swarm, they tend to cause fish to swarm, which is helpful to fishermen looking for places to cast their lines. Fishermen sometimes use lures crafted to look like mayflies.

The purpose of the adult mayfly is to reproduce, and once they reproduce, they die. During swarming, adult mayflies mate. Once the male mates with a female, he protects her to prevent other males from mating with her. Females can produce as few as 50 to several thousand eggs. After mating, a female mayfly deposits her eggs into the water by dipping. A female mayfly dips several times to release eggs into the water. Some mayflies drop their eggs on the water’s surface. The eggs sink into the water, resting among debris and aquatic plants. However, when mayflies deposit eggs in this manner, the eggs can be eaten by fish before sinking.

Mayfly larvae are known as naiads or nymphs, which emerge a short time after the female lays the eggs. The new naiads are very tiny with no gills. The developmental stages of naiads are known as instars. Depending on the species of the nymph, the number of instars can range from 12 to 45. The location where naiads live and the water temperature determine how long a species remains in the naiad stage.

Eventually, the nymph molts or sheds its outer layer. Mayflies are unique, being the only insect with two adult molts. Molting is the process of shedding the outer shell or outer skin.

Mayflies live most of their lives underwater. After several months of living underwater, mayfly naiads float to the top and molt into the stage known as subimago or the sub-adult state. At this stage, just before it can fly, the young mayfly is vulnerable to predators. As a sub-adult, the mayfly is not able to mate or reproduce. However, within hours the mayfly molts again into the imago state, becoming an adult winged insect with the ability to reproduce, but not the ability to eat or drink. This version of the mayfly lives for hours or, at most, a few days.

The mayfly population in a specific area can depend on the quality of the habitat. Cleaner streams attract more mayflies. Since mayflies can deposit from 50 to several thousand eggs, the number of mayflies in an area depends on the number of eggs adult females deposit in the water. Mayflies have made a comeback in some areas recently because of improved water quality.

View all 120 animals that start with M

When mayflies fly in large groups, they are attracted to lights and typically congregate on the sides of buildings, on posts, and in trees. In some areas, officials may order streetlights turned out to avoid attracting mayflies. When mayflies die, they can leave behind an unpleasant aroma. Since they die quickly in large numbers, piles of dead mayflies can trigger allergies in some people. Mayflies in large quantities can end up on roadways causing the surfaces to become slick and dangerous for drivers. They can get into electrical substations and knock out the power near the waters where they originate. However, they are more of a nuisance than a danger to humans.

What are mayflies good for?

Mayflies add value to the areas where they live. Mayfly habitats tend to create excellent fishing opportunities. Large numbers of mayflies attract fish, and they can boost tourism in areas with fishing businesses. The insects tend to live in clean water, so the presence of many mayflies near streams is a sign of favorable environmental quality. As a result, some people are willing to tolerate mayflies since they are a sign of a healthy ecosystem.

Do mayflies sting or bite

Mayflies do not have mouths to eat, and with such a short life cycle, mayflies do not need food. Although they may appear to be a stinging insect with their long tails, they neither bite nor sting. The mayfly’s primary purpose is to reproduce, and shortly after that, they die.

Are Mayflies herbivores, carnivores, or omnivores?

Mayflies are Omnivores, meaning they eat both plants and other animals.

What Kingdom do Mayflies belong to?

Mayflies belong to the Kingdom Animalia.

What phylum do Mayflies belong to?

Mayflies belong to the phylum Arthropoda.

What class do Mayflies belong to?

Mayflies belong to the class Insecta.

What order do Mayflies belong to?

Mayflies belong to the order Ephemeroptera.

What type of covering do Mayflies have?

Mayflies are covered in Shells.

Where do Mayflies live?

In what type of habitat do Mayflies live?

Mayflies live in forests and woodlands close to water.

What do Mayflies eat?

What are some predators of Mayflies?

Predators of Mayflies include birds, rodents, and reptiles.

What is the average litter size for a Mayfly?

What is an interesting fact about Mayflies?

There are 2,500 known Mayfly species worldwide!

What is the scientific name for the Mayfly?

The scientific name for the Mayfly is Ephemeroptera.

How many species of Mayfly are there?

How long do mayflies live?

The average mayfly lifespan is only one or two days.

What's the difference between a crane fly and a mayfly?

The key differences between a crane fly and a mayfly lie in their taxonomy, morphology, distribution, habitat, diet, behavior, reproduction, and lifespan. Crane flies belong to the order Diptera, while mayflies come from the order Ephemeroptera. Adult crane flies can live for 10-15 days, while adult mayflies can only live for a few hours or two days.

What's the difference between a mayfly and a fishfly?

People often interchangeably use mayfly and fishfly as the same name for short-lived insects. The primary difference between fishflies and mayflies is that mayflies are from the Ephemeroptera order while fishflies are larger insects that are part of the family Corydalidae. 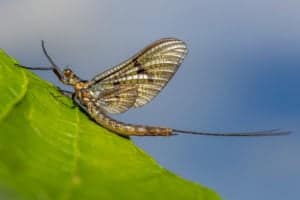 What Do Mayflies Eat?