Muskox have several physical characteristics that allow them to survive in the Arctic climate.

Click through all of our Muskox images in the gallery. 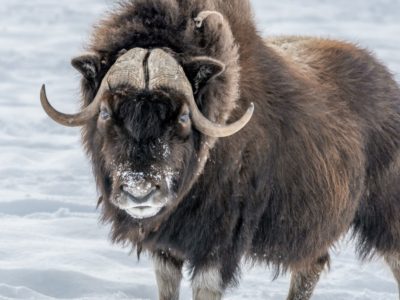 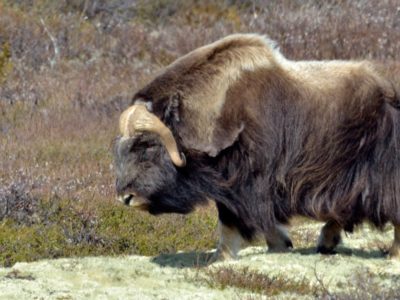 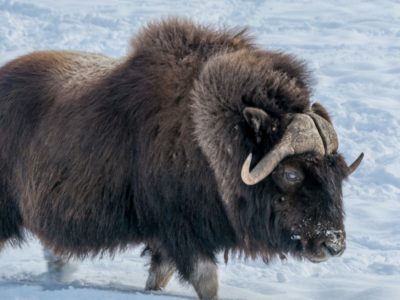 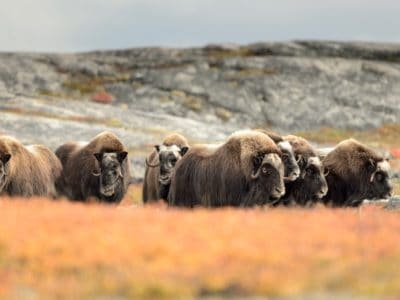 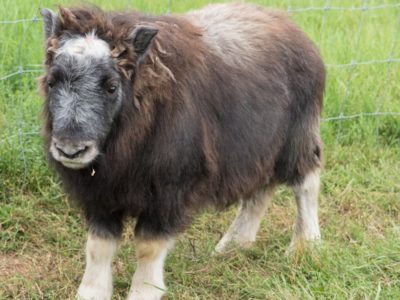 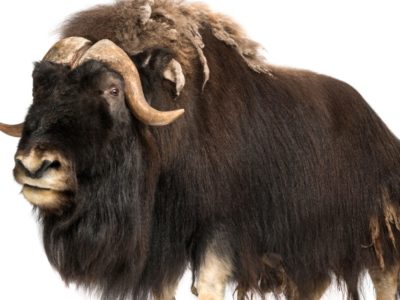 View all of the Muskox images!

Musk oxen have physical adaptations that allow them to live in the harsh Arctic climate year-round. They are herbivores eating grass, roots, flowers, lichen, moss, and other plant life. Musk oxen live in groups called herds. These large mammals can live up to 20 years.

Ovibos moschatus is the scientific name for a musk ox. The Latin word Ovibos means sheep-ox and moschatus means musky. These mammals are called Oomingmak (bearded-one) by the Inupiaq people in Alaska.

Musk oxen belong to the Bovidae family and are in the Mammalia class.

The two subspecies of musk ox include:

Musk oxen have a double-layer coat of long dark brown fur. Some musk oxen have a coat that is so dark it looks almost black. They have a layer of wool next to their skin and a top layer of long, guard hairs that block moisture as well as the wind. Both males and females have two horns as well as four sturdy hooves. A male’s horns are larger than a female’s horns. Furthermore, the horns of a male musk ox form a browband, or boss, on the top of its head. A male’s browband is larger and thicker than a female’s browband. This mammal has a hump on the upper area of its back.

Male musk oxen are about five feet tall at the shoulder while females are about 4 feet tall. Males weigh from 600 to 900 pounds while females weigh from 400 to 500 pounds. A 900-pound musk ox weighs about the same as an adult horse. A 500-pound female musk ox is half as heavy as a grand piano! A five-foot-tall male musk ox is one-fourth the height of an adult giraffe while a four-foot-tall female is two-thirds the height of a refrigerator. The record for the longest horn of a musk ox comes in at just under 30 inches.

The physical adaptations of a musk ox allow it to survive in the harsh climate of the Arctic tundra. One physical adaptation of this animal has to do with its hoofed feet. They use their tough hooves to break and dig through the ice to find grass and other vegetation. Also, their sturdy hooves allow them to walk on the ice and snow for months at a time without hurting their feet. If you look closely, you’ll see the musk ox has eyes with horizontal pupils. The design of their eyes provides protection from the sun’s glare as it reflects off the snow and ice. This is important, especially because these animals are always on the lookout for predators.

Musk oxen live in groups also called herds with an average of 18 members. Living in a herd serves as some protection from predators. Adult musk oxen are able to kick at predators with their hoofed feet and try to hit them with their sturdy horns. Otherwise, musk oxen are passive animals until the mating season arrives and males begin to compete for the attention of females.

The Thick Coat of the Muskox

The double coat of a musk ox allows it to live in its frigid, windy environment. Their top layer of guard hairs repels water, snow, and wind. The layer next to the ox’s skin is made of light wool called qiviut. This layer helps to keep the musk ox warm. Musk oxen shed their qiviut, pronounced kee-vee-ut, in the warm summer months. It grows back once again with the approach of the winter months.

Muskox are found in Alaska, Greenland, Canada, Russia, and Norway. They live on the Arctic tundra throughout the year. This habitat has frigid temperatures and a layer of snow and ice in the wintertime. In the summer, there is an increase in the vegetation available and temperatures are warmer.

In the wintertime, musk oxen move to higher elevations including hillsides where it’s a little easier to retrieve vegetation from beneath the snow and ice. The snow is less deep on hillsides. In the early spring and throughout the summer months, they live in river valleys where they graze near a stream or river.

Wolves move around the environment in packs and stalk a herd of musk oxen from different directions. If they can get the herd moving, the wolves work together to separate a calf or older ox from the herd. An adult ox can defend itself with its horns or by kicking with its powerful hoofed feet. A wolf that is kicked by an adult musk ox is likely to be seriously hurt or even killed. This is why wolves usually go after calves or older, less powerful oxen.

A lone Grizzly bear may go after a calf or an older musk ox if the herd is moving. However, though a Grizzly bear is a large and powerful mammal, it is still outmatched by a herd of adult musk oxen positioned in a circle, protecting their calves.

Changes in climate are a threat to musk oxen. These changes can result in reduced vegetation growth.

Humans are another threat to the musk ox. They are hunted for their meat as well as their qiviut. Fortunately, there are now hunting laws in some areas that protect musk oxen from being hunted for their meat, horns, etc. Also, many of these mammals live on nature preserves where they are protected.

Despite these threats, the conservation status of the musk ox is Least Concern with a stable population.

Musk oxen are herbivores eating different types of plants during different seasons of the year. They build up their body fat in the summertime to tide them over when plant life isn’t as abundant during the winter. This is comparable to a polar bear building up fat during the warm weather months. But, a musk ox doesn’t hibernate!

What do musk oxen eat?

In the summertime, musk oxen eat grass, flowers, forbs, and sedge. In the wintertime, their diet includes roots, lichen, and moss.

What eats a Muskox?

Musk oxen form a physical circle around their calves to protect them when they’re being stalked by Arctic wolves. This is sometimes called, ‘circling the wagons.’ When musk oxen form this protective circle, it may persuade a pack of Arctic wolves to move on and find another herd.

In addition, some people hunt musk oxen for their meat, their horns or both.

Breeding season for musk oxen begins in late summer and runs into autumn. Male musk oxen release a musky smell during mating season which is how this animal got its name. Males compete for females in the herd by charging one another and bashing horns together. They can sometimes run at each other at speeds of up to 25 mph! Eventually, one of the males becomes worn out and moves away. Though this is a very loud and powerful show of aggression, the male oxen are usually not injured.

The gestation period of a female musk ox is about 8 months. She gives live birth to one baby also called a calf. Sometimes female musk oxen give birth to two calves, but that’s a very rare occurrence. A calf weighs around 20 pounds at birth but gains weight quickly with each passing day. Musk ox calves are standing and moving with the herd an hour after they are born. This makes sense because a calf that is on the ground or moving slowly is especially vulnerable to attack by wolves. A baby ox nurses from its mother for the first 8 months of life. Calves are weaned at about 10 months old and can live independently at 2 years of age.

Musk oxen can live for as long as 20 years.

According to the IUCN Red List, the total population of the musk ox is between 133,914 and 136,914 mature individuals. In terms of the region:

The conservation status of the musk ox is Least Concern with a stable population.

What is a Muskox?

Musk oxen live in Alaska, Greenland, Canada, Norway, and Russia. Their habitat is the Arctic tundra. They are large mammals known for their long, shaggy coat and horns. Their coat can be dark brown to almost black. They are herbivores that have several physical adaptations that allow them to live in their frigid habitat.

Are Muskox carnivores, herbivores, or omnivores?

Musk oxen are herbivores eating a diet of grass, roots, sedge, moss, and lichen. Their diet is different depending on the season and accessibility to certain types of plant life.

Where are Muskox found?

Musk oxen are found in Alaska, Norway, Canada, Russia, and Greenland. They live on the frozen tundra and endure frigid winters with little food available.

Is a Muskox a buffalo?

A musk ox certainly looks like a buffalo, but it isn’t one. In fact, musk oxen are more closely related to sheep and goats than they are oxen. One of a musk ox’s closest relatives is the chamois.

For the most part, the answer is no. Of course, any animal can become dangerous when it feels threatened. For instance, a female musk ox can become aggressive if she feels her baby is threatened. And, during the breeding season, male musk oxen become aggressive toward one another. Surprisingly, males are usually not seriously hurt even after butting heads with other males.

What do Muskox eat?

How much does a Muskox weigh?

A male musk ox can weigh up to 900 pounds while the smaller female weighs up to 500 pounds.