Natively found in the European mountains! 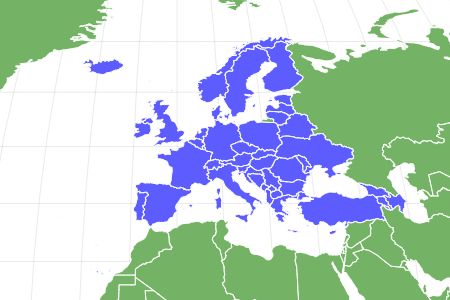 View all of our Chamois pictures in the gallery.

View all of the Chamois images!

The chamois is a small, hoofed animal that is a goat antelope species.

It is native to Asia Minor and the Eastern, Central, and Western European mountains at moderately high altitudes, and it was introduced to New Zealand. The pronunciation of its name resembles that of the French, while the pronunciation for its name as leather is based on “chamy” or “shammy.” Some subspecies of this bovid are having protection under the EU’s European Habitat Directive.

The chamois is an animal in the family Bovidae includes cloven-hoofed, ruminant vertebrates such as the bison, American buffalo, water buffalo, antelope, sheep, goats, muskoxen, and domestic cattle. It is further classified into the goat antelope subfamily Caprinae, which contains medium-sized bovids. Called a caprine or goat antelope, it is not a true antelope, which is classed as either cervid-like (true deer in the family Cervidae) or antilocaprid-like (even-toed ungulates in the order Artiodactyl, with their closest relatives being in the superfamily Giraffoidea).

There are two species in the genus Rupicapra, R. rupicapra and R. pyrenaica. Its synonym is the former scientific name Capra rupicapra. The type species R. rupicapra contains 7 subspecies.

Both sexes have short, mostly straight horns which curve backward near the tip, with male horns being thicker. Both have rich brown fur which turns into a light chestnut color in spring and summer and long, light grey guard hairs in winter. They have white a long black or brown band from each side of the muzzle to the eyes and ears, white on the rest of the head and throat for contrast, a white rump, and a black stripe along the back. Their hooves are excellent for gripping slippery rock. The tail is not usually visible except when mating.

Chamois are mostly diurnal animals but can be active at night. Adult males lead solitary lives for most of the year, while female chamois and their young live in hers of 15-30 individuals. Chamois gives a warning call of danger by stamping their feet and making a whistling sound. When alarmed or threatened, they flee to the most inaccessible heights, often by making amazing leaps.

The habitat of the chamois is the moderately high, very sleep, rugged and rocky mountains of Europe and Asia Minor. It prefers alpine and subalpine meadows above the timberline and both fairly steep and flatter terrain, moving into forested areas and steep slopes during the winter to avoid the accumulation of snow. The animal is often found at elevations with a minimum height of 3,600 m (11,800 ft), moving to areas predominated by pine trees in lower elevations of around 800 m (2,600 ft) in the winter

The chamois’ native habitat range includes the Alps, Pyrenees, Carpathians, Tatra Mountains, the Balkans, parts of Turkey, the Caucasus, and the Apennines. It was introduced into the South Island of New Zealand.

The other species of the chamois, R. pyrenaica (Pyrenean chamois) lives in the Pyrenees, the Cantabrian Mountains, and the Apennine Mountains. The 7 subspecies of R. rupicapra have different habitat ranges including:

The chamois has an herbivorous diet. It eats mainly grasses, herbs, and flowers in the summer, and lichens, mosses, barks, needles, and young pine shoots in the winter. When the snow is so deep that it cannot find food, it has been known to fast for two weeks.

The common predators of the chamois used to be grey wolves, Eurasian lynxes, and Persian leopards, as well as some brown bears and golden eagles. Humans have established themselves as their main predators, finding them to be popular game animals with tasty meat. Chamois is also used for the soft, pliable leather made from its skin. Common causes of mortality to chamois include the threats of avalanches, epidemics, and human disturbance, competition with livestock for food and space, habitat loss, and hybridization with introduced subspecies. Poaching and overhunting are threats from human predation.

The mating season of the chamois is around late November/early December when males have fierce battles with each other for the attention of unmated females. It is during this time that the tails of both sexes are visible. Pregnant females have a gestation period of 170 days. A baby chamois is called a kid. Females give birth to a single kid or the occasional twins in May or early June.

If the mother dies, another females raise the kids. Kids are weaned at 6 months and are fully grown at one year, but they do not reach sexual maturity until 3-4 years of age, with some females ready to mate as early as 2 years old. Once the males reach sexual maturity, dominant males force them out of their mothers’ herds. They then wander nomadically until they establish themselves through breeding at 8-9 years.

Chamois typically live up to 22 years in captivity and 15-17 years in the wild.

The latest estimated population of these animals in Europe is approximately 400,000. Since they were introduced into New Zealand in the 20th century due to environmental changes in their native habitat, their numbers rapidly increased to almost 100,000 by the 1970s and they threatened the local vegetation. Since then, the chamois population has decreased by about 20,000.

Chamois In the Zoo

These animals are difficult to house in zoos, instead of being a common captive species in a number of game parks and nonscientific institutions in Europe. However, it can be seen at the Toronto Zoo and the Munich Zoo Hellabrunn.

Are Chamois herbivores, carnivores, or omnivores?

What Kingdom do Chamois belong to?

Chamois belong to the Kingdom Animalia.

What phylum do Chamois belong to?

Chamois belong to the phylum Chordata.

What class do Chamois belong to?

Chamois belong to the class Mammalia.

What family do Chamois belong to?

Chamois belong to the family Bovidae.

What order do Chamois belong to?

Chamois belong to the order Artiodactyla.

What genus do Chamois belong to?

Chamois belong to the genus Rupicapra.

What type of covering do Chamois have?

Chamois are covered in fur.

In what type of habitat do Chamois live?

What is the main prey for Chamois?

What are some predators of Chamois?

Predators of Chamois include humans, wolves, and wildcats.

What are some distinguishing features of Chamois?

How many babies do Chamois have?

The average number of babies a Chamois has is 1.

What is an interesting fact about Chamois?

Chamois are natively found in the European mountains!

What is the lifespan of a Chamois?

How fast is a Chamois?

A Chamois can travel at speeds of up to 10 miles per hour.

What is a chamois?

A chamois is a very small bovid in the goat-antelope subfamily.

How do you pronounce Chamois?

Are chamois carnivores, herbivores or omnivores?

What do chamois eat?

How tall is a chamois animal?