Produces a lot of milk for its small size 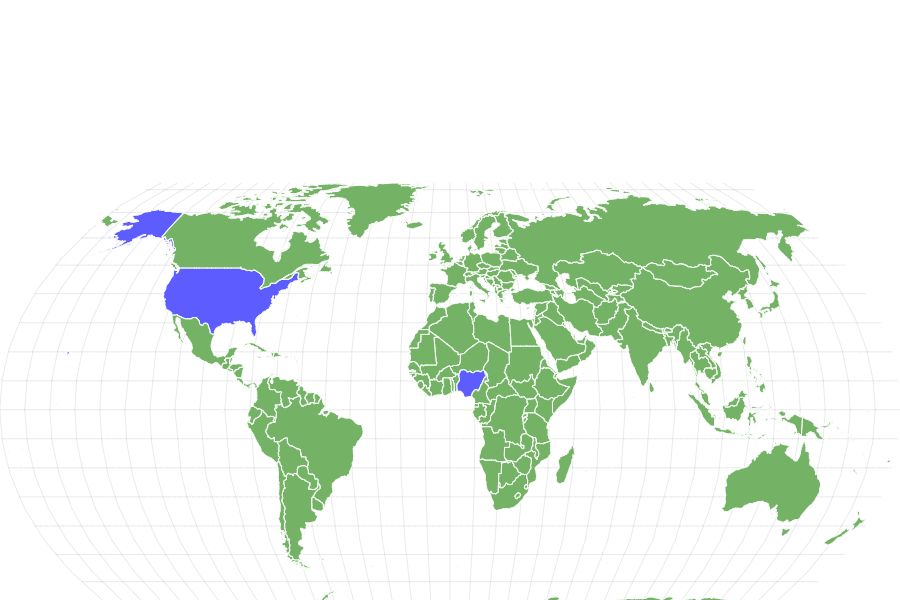 View all of our Nigerian Goat pictures in the gallery.

View all of the Nigerian Goat images!

The Nigerian dwarf goat is a small goat species from the West African Dwarf goat breeds like the American Pygmy Goat.

The American breed was specifically developed to be a miniature, small-scale dairy goat. It has the same proportions as larger dairy goat breeds but much smaller. Popular for its characteristics of small size, easy maintenance, colorful markings, gentle, friendly, intelligent, and playful personality, it is a favorite as small livestock as well as a companion animal.

The scientific name of the Nigerian Dwarf Goat is Capra aegagrus hircus. All domestic goats are a subspecies of C. aegagrus originating from the wild goat from Eastern Europe and Southwest Asia. From this subspecies are more than 300 breeds, of which the Nigerian Dwarf Goat is one. The description of a breed is simply a domesticated subspecies, so there is no scientific name for different breeds.

The description of the Nigerian Dwarf Goat was initially as a show and companion animal, later becoming a dairy and meat goat. Like other goat breeds, physical characteristics include being even-toed ungulates, mammalian ruminants, and having horns, beards, and horizontal, slit-shaped pupils. There are specific height and weight ranges for each breed. For the Nigerian Dwarf Goat, it can sometimes be naturally hornless.

The coat is short and fine, with colors that range from solid to multicolored including red, gold, cream, black, white, and patterns with or without white spots. It has upright ears with a usually concave facial profile. It weighs about 35kg (75lb) and about 60cm (24in) in height. Males are slightly larger than females, being 16-24in and females being 16-22in. Males weigh on average 50 to 70 lbs (22 to 31kg) while females weigh on average 40 to 70 pounds (18 to 31kg).

The description of Nigerian Dwarf goats includes characteristics of precocity, intelligence, playfulness, curiosity, gentleness, friendliness, and low maintenance. They make excellent pets for anyone who wants an unconventional companion, children, the elderly, and the disabled. Hornless or polled goats are worth more but are a good option to avoid getting hurt from their headbutting. Nigerian Dwarf goats are calm but hardy and can adapt well to a variety of environments. A group of goats is called a tribe or trip.

Nigerian Dwarf goats were initially exhibited in zoos, but they do well in both and small homesteads and farms. They are a good choice for suburban homesteaders who don’t have a lot of space and can provide a dog box shelter and a fenced-in backyard for their homes.

The ancestors of Nigerian Dwarf goats originated in the harsh conditions of Central and West Africa where there are hot, humid plains, valleys, and other environments. They are valued for needing less feed and producing more milk than other, larger breeds, and are useful for meat, milk, wool, and leather. Although wild goats come from Asia and Europe, they were separately domesticated and developed in different countries.

The description of the Nigerian Dwarf goat is an ungulate, or a hoofed animal, and a ruminant, or an animal that chews cud. For the care of lactating does or baby goats, or kids, they do well with a diet of alfalfa hay with proper protein, while the diet for adults is 90% of a legume/grass hay mixture plus grains, seeds, herbs, minerals, and supplements. Goats are useful for clearing brush and will graze to supplement their primary food source.

However, there are poisonous plants to take care to watch out for. Snakeweeds and ponderosa pine needles induce abortions, while lupine, nicotiana glauca, and poison hemlock cause birth defects. There are plants with other possible negative effects, including common herbs and grasses:

Goats have large predator mammals that attack them, including eagles, dogs, coyotes, foxes, and wolves. Eagles can snatch and carry away kids and even adult Nigerian goats. Bobcats, mountain lions, and bears are also possible threats although they tend to prefer larger prey, so owners must take care to supervise the goats, especially vulnerable pregnant does, mothers, and kids. If owners have a farm or homestead that is larger and in rural areas, a herding dog can act to help watch and protect the livestock.

Nigerian dwarf goats can breed year-round. Some owners prefer limiting breeding their does to three times in two years, giving a minimum break of 6 months. Gestation is 145-154 days while giving birth to 2-4 babies at a time, and the does often do not need help during the process. Lactating does can produce 1 to 8 pounds of milk a day but on average 3 to 4 pounds of milk with 6 to 10 percent butterfat, and for up to 10 months out of the year.

A baby goat is called a kid, and kids can be weaned as early as 30 days but ideally 6 to 8 weeks. The goats are sexually mature at three to four months for males and seven to eight months for females, while they both reach full adult maturity at 24 months. A herd of goats is called a tribe or trip. Their lifespan is about 15 years.

The ancestors of Nigerian dwarf goats, West African dwarf goats are major livestock in 15 countries across West and Central Africa. They serve as a livestock source for meat, milk, wool, and leather.

What are Nigerian goats good for?

Being a livestock source for meat and milk, a show animal, and a companion animal.

How big do Nigerian goats get?

How long do Nigerian goats live?

The lifespan of Nigerian goats is about 15 years. Compared to other pets, this lifespan is considered a long time.

How much is a Nigerian dwarf goat?

How many Nigerian goats are left?

As a major source of income and livelihood in Africa and the United States, populations of Nigerian dwarf goats are not under threat.