The only hibernating canine! Click through all of our Raccoon Dog images in the gallery. 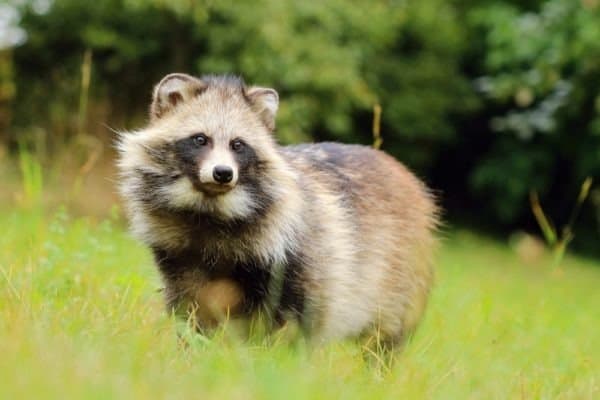 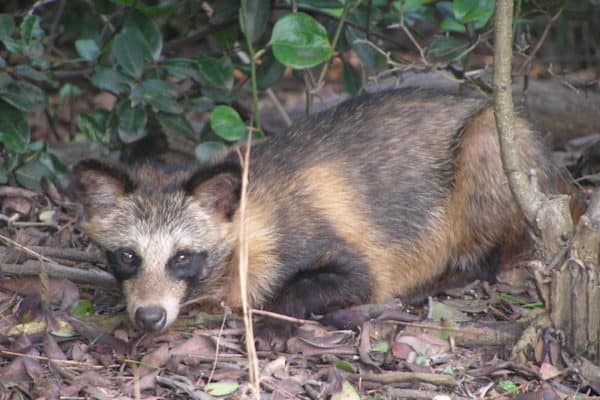 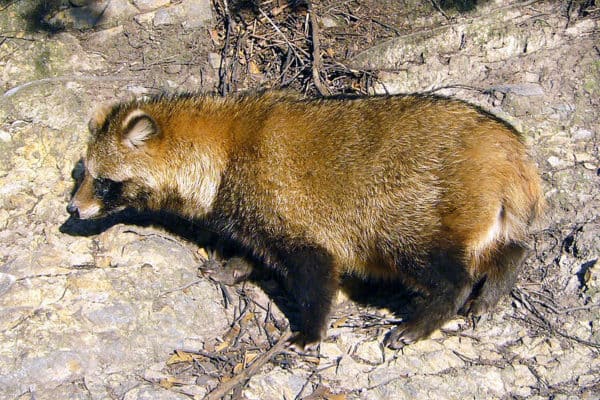 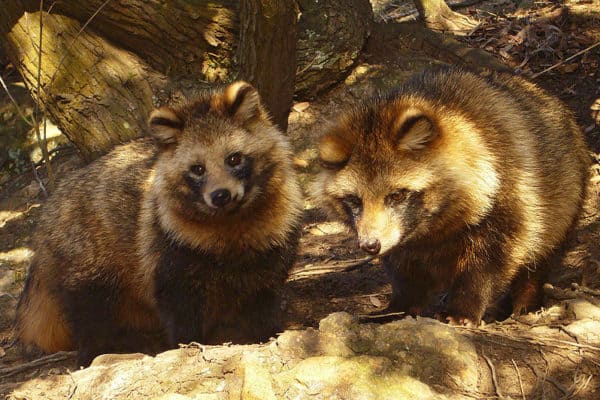 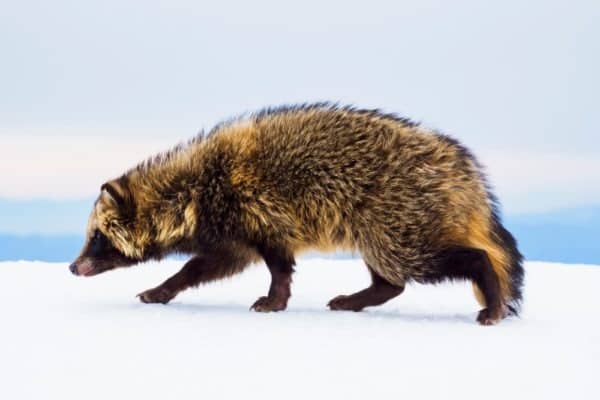 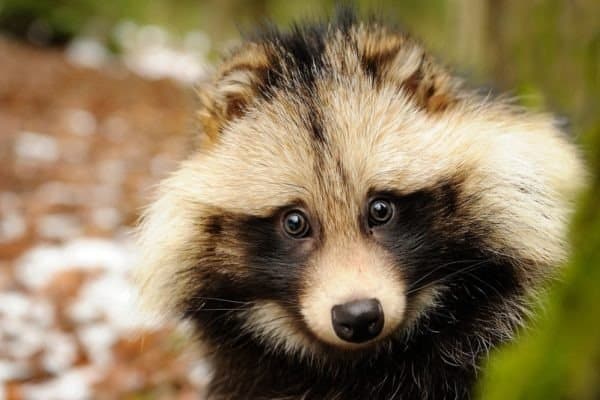 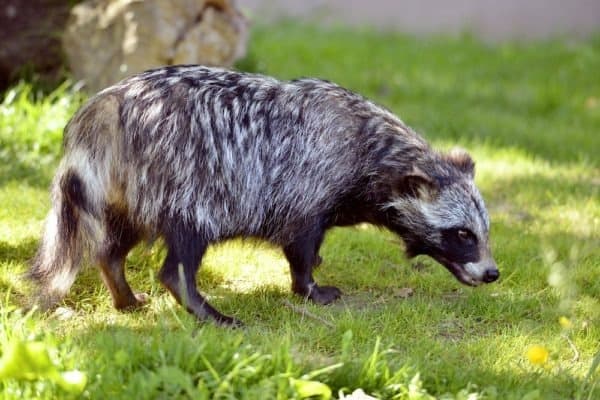 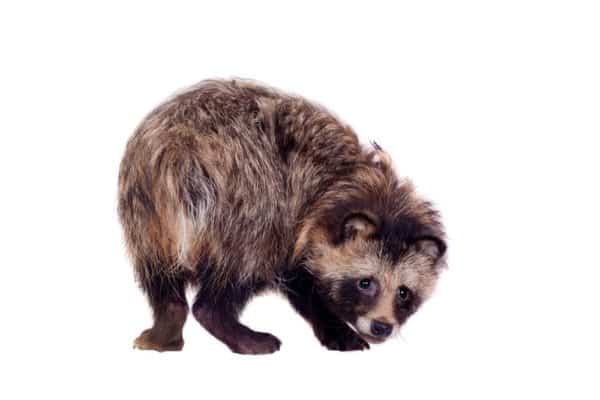 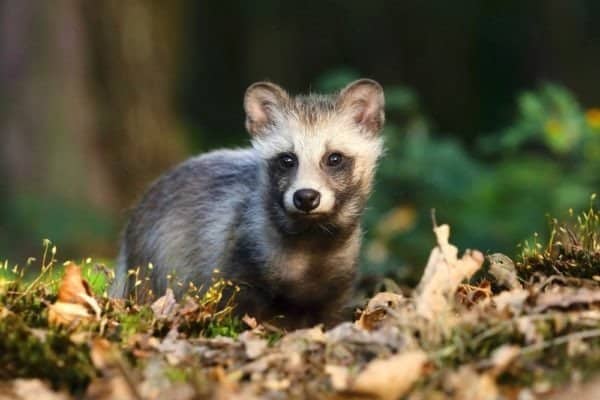 View all of the Raccoon Dog images!

Raccoon dogs live in Europe and Asia. Though they look similar to raccoons, they are not related to them. These animals are omnivores and are active at night and part of the day. They have a lifespan of 6 to 11 years. They are social animals that live in pairs or small groups.

The scientific name for these animals is Nyctereutes procyonoides. The Greek words Nyctereutes procyonoides mean night wanderer. The word is broken up this way: nykt (night), ereutes (wanderer). Japanese raccoon dog, Japanese badger, tanuki, mangut and Neoguri are other names connected with this mammal. Neoguri is the Korean name for these animals.

The mangut or tanuki is a subspecies with a smaller skull and smaller teeth than a Japanese raccoon dog. The Korean raccoon dog (aka the Neoguri) and the Ussuri raccoon dog are two other subspecies.

The raccoon dog belongs to the Canidae family and is in the Mammalia class.

The thick coat of these animals is a mixture of brown, gray, tan, and black hair. It has a black tail and a black stripe across its shoulders. Raccoon dogs have two dark eyes and ears that are similar to a fox’s ears.

In Japan and China, there are a few mangut, or tanuki, with a coat of pure white fur. The saying goes that if you see an all-white tanuki, you can expect good luck to come your way. Unfortunately, these tanuki are rarely seen.

An adult measures between 20 and 27 inches long. If you lined up 13 golf tees end to end they would equal the length of a 27-inch long raccoon dog. The weight of an adult animal ranges between 9 and 20 pounds. As an example, a 20-pound raccoon dog weighs about the same as two average-sized housecats. The heaviest a raccoon dog can get is 22 pounds.

They have poor eyesight but an excellent sense of smell. This helps them to find prey, especially when hunting at night.

This mammal is social and lives in pairs or with a small family. A group of raccoon dogs is called a pack. They try to avoid being seen but will become aggressive if they feel threatened.

This animal’s brown coat allows it to blend in with its environment as a protection against predators. These mammals can also swim and climb trees to escape threats. The ability to climb trees is a characteristic they share with one other animal from the Canidae family, namely the gray fox.

These animals live in a temperate climate. Their habitat includes coniferous and broadleaf forests as well as grasslands. They have also been known to live in urban settings.

These mammals live in burrows located in areas of thick vegetation where they can hide and blend in with their environment. When food becomes scarce in their habitat, these mammals migrate to find a new territory where prey is more plentiful. They are adaptable and can move long distances to find a food source.

The activities of these animals slow down in the wintertime from December to February. They hibernate, but only during serious snowstorms. They find an abandoned burrow created by a badger or other animal and settle in for the cold weather months. These mammals hibernate in pairs.

What do these animals eat? These animals are omnivores. It eats birds, insects, lizards, snakes, and mice. Plants, berries, and nuts are also on the menu. This mammal can swim so it captures frogs, crabs and fish in rivers and streams.

Some raccoon dogs live in urban environments where wildlife is scarce. So, they’ve been known to dig through garbage cans and eat leftovers thrown away by people. Sometimes raccoon dogs steal eggs out of birds’ nests. In short, they adapt to eating whatever is in their environment and are sometimes called scavengers.

These animals have a few predators including wolverines, wolves, lynx, Golden eagles, and domesticated dogs. If the animal can’t escape from a predator, it only has its teeth and claws to use for protection. Many of its predators are stronger and can overpower this mammal.

Humans are another threat to these animals. There is a demand for the fur of a raccoon dog, so they are sometimes caught in traps set by poachers. Plus, in Japan, these animals are a form of cuisine.

Raccoon dogs that live in urban environments near homes are considered pests because they can transmit disease to pets and even humans. They are sometimes poisoned or shot if they enter these environments. They can be killed while trying to cross roads in busy areas as well.

Despite all of their predators and threats the official conservation status of these animals is Least Concern. Their population is categorized as stable.

The mating season of these animals begins in February and goes through April. A female releases a scent to signal she is ready to mate. Three or four males fight over her to see which one is strongest. Once a female and a male pair up they are mates for life. This means they are monogamous.

The gestation period of a female falls between 60 and 70 days. Raccoon dog babies, also known as pups, are born in April or May. A female usually has six pups per litter, but there have been litters with as many as 15 or 16 pups in them. Both the males and females help to care for their pups.

These pups are born blind with a thin coat of coarse hair. They weigh two to six ounces. A six-ounce raccoon dog pup weighs the same as a pet hamster. At ten days, the pups’ eyes open. They are nursed for the first 40 to 60 days of their life but begin to eat some solid foods at three weeks old.

The pups remain with their parents until they are four and a half months old. After that, they go out and live independently. They reach adulthood at 10 months old. These mammals have a lifespan of 6 to 11 years. The oldest Japanese badger aka raccoon dog on record died at age 16. Its name was Tanu and it lived with a family in Japan.

As these mammals age, they can take on parasites and fleas as well as develop mange. In some cases, they have been known to carry rabies.

The conservation status of these animals is Least Concern. Though their exact population is unknown in many areas, scientists estimate there are approximately 120,000 adult raccoon dogs in Finland.

The population of this mammal is categorized as stable mostly because it’s an adaptable creature that can find food and shelter in a variety of environments.

Raccoon Dog in the Zoo

View all 24 animals that start with R

What is a raccoon dog?

It’s a mammal with a mask of fur on its face that makes it look a lot like a raccoon. But, despite the name, it’s not related to the raccoon. The fox is its closest relative.

Raccoon dogs are omnivores that can swim, climb trees, and travel long distances on the ground making them very adaptable to their environment. Their conservation status is Least Concern.

Where do raccoon dogs live?

Raccoon dogs live in countries throughout Europe and Asia. Their habitat includes grasslands and temperate forests. They are known to hibernate in the winter when there’s a serious snowstorm.

No, they are not considered dangerous. However, any animal can become aggressive if it feels cornered or threatened by another animal or a human.

Raccoon dogs whine, growl, and howl when communicating with one another. Regardless of their name, they are not known to wag their tails or bark. In fact, some scientists report that Japanese raccoon dogs sound more like cats than dogs.

Are raccoon dogs legal in the U.S.?

No, they are illegal to own or even bring into the United States. The one exception is a zoo. The scientists and animal technicians working in a zoo would be able to care for a raccoon dog properly and keep it away from the other animals.

Unfortunately, raccoon dogs are considered an invasive species in the United States because they carry parasites, bacteria, and diseases that can easily be passed to other animals. Of course, there’s no harm in learning more about them as long as you don’t try to bring one home!

Raccoon Dogs are Carnivores, meaning they eat other animals.

What Kingdom do Raccoon Dogs belong to?

What phylum to Raccoon Dogs belong to?

What class do Raccoon Dogs belong to?

What family do Raccoon Dogs belong to?

What order do Raccoon Dogs belong to?

What type of covering do Raccoon Dogs have?

Raccoon Dogs are covered in Fur.

What genus do Raccoon Dogs belong to?

What is the main prey for Raccoon Dogs?

What are some predators of Raccoon Dogs?

Predators of Raccoon Dogs include foxes, wolves, and wildcats.

What are some distinguishing features of Raccoon Dogs?

How many babies do Raccoon Dogs have?

The average number of babies a Raccoon Dog has is 8.

What is an interesting fact about Raccoon Dogs?

Raccoon Dogs are the only hibernating canines!

What is the scientific name for the Raccoon Dog?

The scientific name for the Raccoon Dog is Nyctereutes procyonoides.

What is the lifespan of a Raccoon Dog?

Raccoon Dogs can live for 3 to 8 years.

What is the lifespan of a Raccoon Dog?

Raccoon Dogs can live for 3 to 8 years.

How fast is a Raccoon Dog?

A Raccoon Dog can travel at speeds of up to 25 miles per hour.