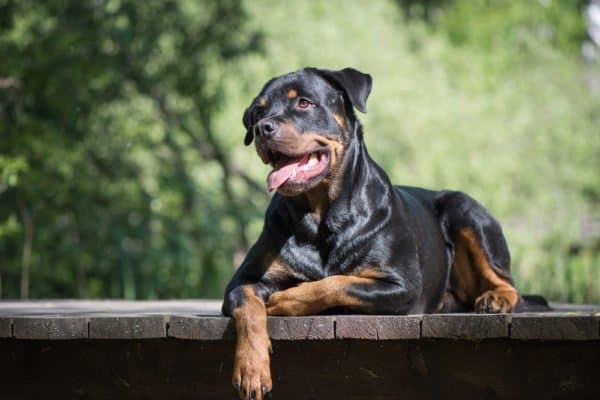 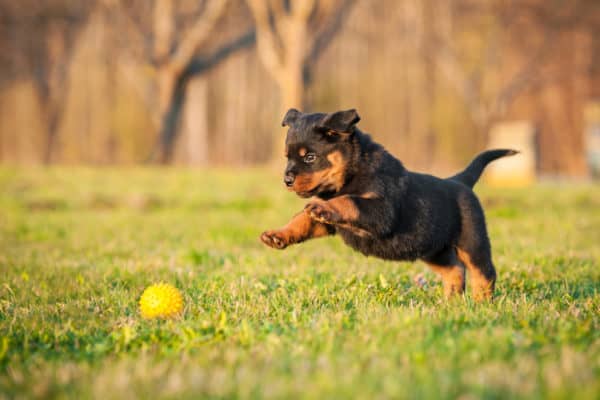 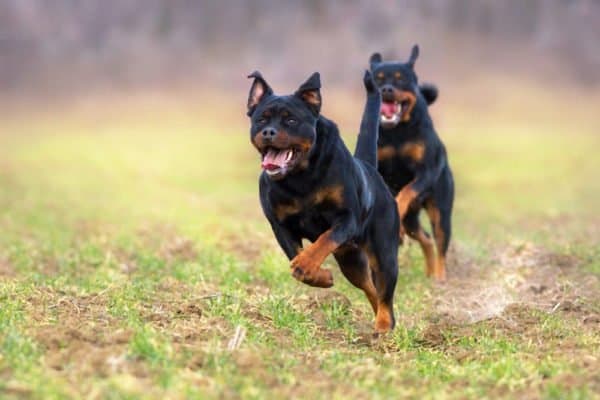 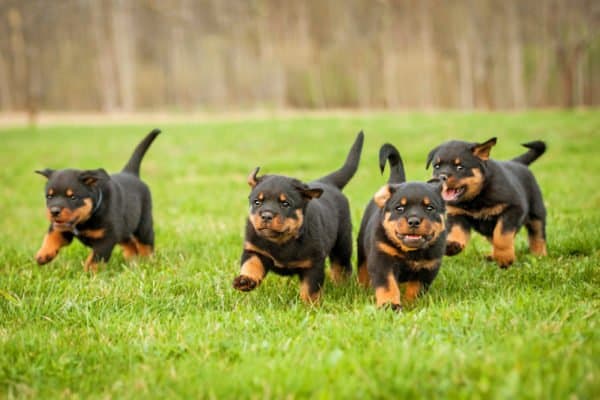 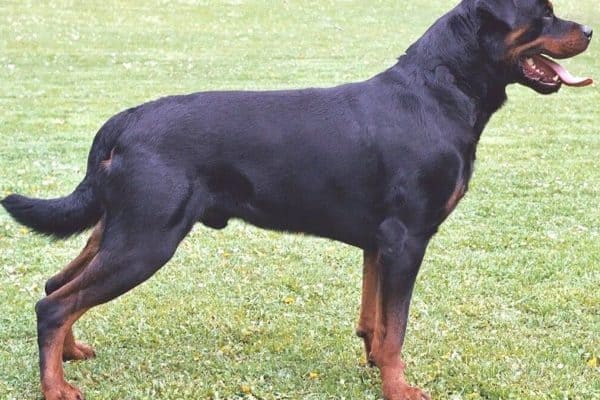 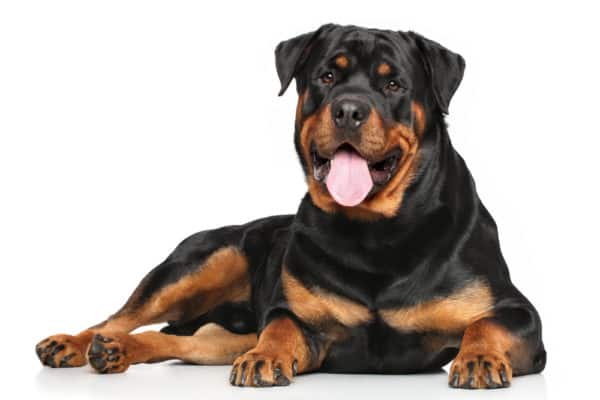 The rottweiler is also known as the Rottie, the Rott, or Rottweil Metzgerhund (German for “Butcher’s Dog”).

It is the 8th most popular dog according to the American Kennel Club, one of the 10 smartest dogs as well as the most loyal breed. Descended from the ancient Roman drover dog and related to the Italian Mastiff, or simply Mastiff, the Rottweiler originated in Rottweil, Germany, and dates back to Roman times. It was used to herd cattle, for bear hunting, or for pulling small carts. Today, the working dog makes an excellent police, service, guard dog, or family pet.

3 Pros and Cons of Owning Rottweilers

Purebred Rottweilers have some common health issues. The most common are eye issues such as Progressive Retinal Atrophy and Cataracts. A heart disease called Aortic Stenosis results in abnormal rhythm and can cause heart attacks. Joint and bone issues such as hip dysplasia, elbow dysplasia and osteochondritis dessecans are also unique to the breed. Finally, cancer complications was the cause of death of 43% in a group of Rottweilers in one recent study. The breed is prone to liver, spleen and bone cancer along with lymphoma. In sum, the most common health issues with Rottweilers are:

The Rottweiler is famous for having a loyal, affectionate, sensitive and protective personality. Due to its calm and quiet temperament it is a popular choice for families, including those with children. It is no more dangerous than any other dog breed but its behavior can become rebellious if it is not trained or socialized properly.

This does not mean they cannot be trained, though. They are very intelligent and take quickly to obedience training. Traits of loyalty, adaptability and eagerness to work with the instinct to hunt and herd are common to both males and females. However, a 2008 study found that confidence, sharpness, defense and play drives were higher in males than in females.

How To Take Care of Rottweilers

Rottweilers are not recommended for new or inexperienced dog owners. Regardless, they have unique needs, especially if they are puppies. Whether it’s teething, training or health issues, Rottweilers have breed-specific issues that must be considered.

Rottweilers need nutritious food that gives them the energy they need without resulting in excess weight. As a result, they need a high protein, meat-based diet without produced meals, soy, wheat or corn.

Rottweiler puppy food: Rottweiler puppies need a lot of protein to develop muscles and build strength as well as fulfill the high energy needs of their puppyhood. Their diet should contain 24-28% protein and 14-18% fat .

Rottweiler adult dog food: Like puppy food considerations, pet owners should feed their adult Rottweiler food that is high in protein and low in fat. It should contain 22-26% protein and 12-16% fat.

The German breed has a short medium length, coarse, dense and flat outer coat and an undercoat. The undercoat thickens as much as necessary according to the surrounding climate, and it also seasonally gets thicker during winter and thinner during summer. As a result, it changes its coat during spring and fall and so undergo more shedding than usual and needing grooming more often. Some dogs living in hot climates do not have undercoats.

Fortunately, the breed is very easy to take care of. It only needs a monthly bath and grooming every 4 to 8 weeks, with a weekly coat brushing and more frequent brushing during the spring and fall.

Due to its large size, the Rottweiler needs obedience training as early as possible — it’s a lot of dog to handle. You should start training your Rottweiler as early as 6 weeks but no later than 6 months of age. A strong handler can establish dominance as the pack leader and be patient enough to provide socialization and positive reinforcement for proper behavior around strangers and other dogs.

The Rottweiler needs daily exercise, but it isn’t overly demanding. A short walk and a longer walk is fine. Indoors, it enjoys chewing toys and games or other mental stimulation.

Rottweiler puppies are much like puppies of any other dog breed, and hence are energetic and playful. They go through teething between 6 weeks to 6 months of age and during this time they will chew on anything, so they need to get used to chew toys early on. Neediness may be apparent early on in puppyhood along with separation anxiety.

Rottweilers are patient and gentle around children, and the longer they are around them, the more protective they become. Due to the rowdiness of young children, they should be supervised around a Rottweiler and taught to treat the dog gently.

Other dog breeds similar to the Rottweiler are Italian Mastiff, Doberman Pinscher and Bernese Mountain Dog.

A number of rotties have made it to television. The large dogs with their lovable and companionable demeanor and silly antics have endeared many fans. Movies like The Omen, Lethal Weapon 3, Entourage, Man’s Best Friend and Half-Baked are just a few examples where their physical stature made them a favorite for silver screen roles.

Popular names for Rottweilers include:

View all 21 animals that start with R

The Rottweiler has a black coat with rich tan markings, a broad skull and muzzle, a strong neck, a deep chest, a curved tail, and a trotting gait. Although its tail was traditionally docked at the first or second joint, tail docking is banned in most countries, a fact that is stated in the FCI Country of Origin Breed Standard.

Is a Rottweiler a good family dog?

Yes, the Rottweiler is a good family dog that is sweet, protective, affectionate, and loyal.

Are Rottweilers good with kids?

Yes, Rottweilers can be wonderfully gentle and patient with kids with the proper socialization and training.

How long do Rottweilers live?

How much does a Rottweiler cost to own?

Rottweilers can be dangerous with poor socialization or training for aggression coupled with their large size and powerful bite.

What is the best dog food for a Rottweiler?

Premium, large breed dog food is best for a Rottweiler.

Rottweilers are one of the 10 smartest dog breeds and are moderately easy to train.