Click through all of our Spiny Hill Turtle images in the gallery. 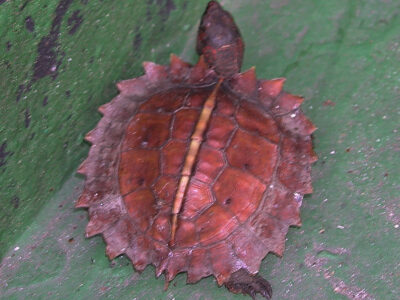 View all of the Spiny Hill Turtle images!

The spiny hill turtle earned its name thanks to its viciously spiky shell and the fact that this Southeast Asian species typically lives at higher elevations.

Found throughout Myanmar, Malaysia, Singapore, and other Southeast Asian countries, these turtles call the rainforest home and rely on the fallen leaves and debris in this environment for both protection and sustenance. Their elusive and solitary nature — along with the fact that they’re threatened with extinction — means that there are still major gaps in our understanding of their behavior in the wild.

The scientific name of the spiny hill turtle is Heosemys spinosa, a name that gets right to the point. Heosemys references the spiny hill turtle’s genus within the larger biological taxonomy. Four species of freshwater turtles fall into this group — and that includes the Giant Asian pond turtle, Arakan forest turtle, and yellow-headed temple turtle. Spinosa comes from the Latin word for thorn bush — spina — in a clear reference to the spiky shell that helps this endangered species stand out.

The most notable physical characteristic the spiny hill turtle possesses is obviously its spiky shell, but this can be a good indicator of a turtle’s age as well. Serrations along the margins of the shell protect younger turtles from predators, but they grow smoother as the turtle ages. Both the coloring and the shell are well-suited to camouflage in the environments they live in. The shells and body vary from brown to olive, but the most notable features are a series of red or yellow splotches that mark their heads, neck, and the space above their eyes.

This breed of turtle is relatively small in size, with the typical turtle ranging between half a foot and three-quarters of a foot in length. Largely thanks to their density and the weight of their shell, these turtles are relatively heavy for their size — approximately three to five pounds when fully grown. Females and males can be hard to distinguish in the wild, but males tend to have thicker tales. Additionally, the plastum — a term for the plate of bone that protects their underside — is concave in males of the species.

If there are fewer facts about this species than there are of the average turtle, it’s due to how elusive this species is. Like most breeds of turtle or terrapin, the spiny hill turtle tends to live a solitary life — but they aren’t territorial. It’s not uncommon for a number of these turtles to occupy the same stretch of land but rarely interact outside of mating. The spiny turtle is crespular — which means it comes out during the twilight hours to forage and spends most of its time hiding undercover. Researchers know little about the nesting habits of the spiny turtle, but they have noted that the unique texture and coloration of its shell allow it to blend in with its environment capably.

The spiny hill turtle is only native to Southeast Asia and Oceania, although its distribution is relatively broad throughout those regions. This species can be found throughout the Philippines, Singapore, Myanmar, Thailand, Malaysia, Brunei, and Indonesia. The islands of Borneo and Sumatra also still maintain small populations of the turtle.

The spiny hill turtle is rather picky about its habitat as well. One of the most commonly recognized facts about this species is that they almost always live in habitats over 900 meters above sea level. They’re a semi-aquatic species that require access to a freshwater source and dense rainforest. The latter is where the spiny hill turtle spends most of its time, as the leaves and other plant matter that fall from the trees above serve as both a food source and a form of camouflage for the spiny hill turtle. Thanks to a lack of webbed feet, these turtles spend most of their time foraging or hiding on the canopy floor — but it’s believed that they begin to spend more time in and near the water as they age.

The spiny hill turtle is primarily an herbivore, though it has been known to eat meat on occasion. This will usually take the form of worms and other invertebrates. The care of spiny hill turtles in captivity calls for a salad of primarily fruit and a small number of vegetables, and this is reflective of their diet in the wild as well. The spiny hill turtle ventures out at twilight to hunt, and they find their dinner among the dead leaves, fruit, and vegetation that falls from the canopies above them.

The reclusive nature of the spiny hill turtle has prevented researchers from learning too much about the threats these animals encounter in the wild, but it’s known that local snakes are some of the most prevalent predators in the rainforest. The spiky shell of younger turtles means that snakes and other predators need to attack with care, but older turtles depend more on camouflaging themselves among the leaves of the canopy floor for self-defense.

But the biggest threat to the species is humans, and they pose threats from a number of different angles. Keeping these turtles as a pet is illegal in many places, but that hasn’t stopped opportunists from taking these animals from their native habitats and selling them as pets or exotic meat. Unfortunately, it’s hard to care for these turtles in captivity — and getting them to breed under the care of humans is especially difficult. At the same time, the lifespan of the very habitats these turtles occupy could be nearing its end. The palm oil industry, in particular, is leading to the deforestation of these habitats — and that’s separating these turtles from both their food source and their primary means of avoiding detection from predators.

This loss of habitat is even more pressing given the difficulty of breeding cogwheel turtles in captivity. Viable reproduction has only been replicated at three facilities, beginning with a hatching at Zoo Atlanta in 1992. Despite this, trading information on breeding habits has uncovered more information about the reproduction cycle of these turtles. Males become sexually excited when sprayed with garden hoses, leading to the conclusion that breeding coincides with rainfall. Breeding happens in or near streams and other bodies of water — and breeding season appears to fall between December and February.

Females will typically lay between one and three eggs, and they can lay as many as three clutches in a year. Mothers will create a nest — although the specifics of nesting in the wild are yet unknown — and the eggs will hatch after roughly 100 days. The spiky protrusions are the sharpest and most predominant in youth, perhaps as a way to protect them before they grow to full size and develop their survival skills. Outside of mating, this species shows little social behavior and appears to devote little time to raising hatchlings.

The lifespan of one of these turtles in captivity is up to 20 years, although their enigmatic nature makes it hard to determine exactly how long they can live in the wild. In addition to predators and human incursion on their environment, there are a number of health ailments that can shorten the life of a spiny turtle. They’re susceptible to the same diseases that target other species of freshwater turtle, including shell rot.

Global and regional data on spiny hill turtle numbers are limited, but the deforestation of their habitats — along with the fact that they don’t take well to breeding in captivity — has earned them a designation as an endangered species. While captive members of the species seem to have adapted well to the humid climates of California, it’s unlikely that they’ll find continued success in the wild without efforts to preserve their land.

These turtles are technically omnivores since they’re known to feed rarely on invertebrates, but the vast majority of their diet in the wild consists of vegetation and fruits.

The spiny hill turtle is recognized as an endangered species. The commercial demand for palm oil has led to the rapid destruction of their environment, and they’ve never taken well to reproducing in captivity. Organizations like the Durrell Wildlife Conservation Trust are working to protect the habitats of these animals and learn more about their behaviors in the wild so they can better understand how to improve their population numbers.

How do I take care of a spiny turtle?

If you end up in possession of a spiny hill turtle, the best thing you can do is bring it to an animal rescue professional. These reptiles struggle to survive in captivity, and they’re an endangered species that needs qualified care.

What does a spiny turtle eat?

Spiny turtles feast on the plant matter that makes up the carpet of their forested habitats. This is primarily vegetable matter, but it consists of some invertebrates and fruits as well.

Where do spiny turtles live?

They occupy a number of nations and islands throughout Southeast Asia and Oceania. Spiny hill turtles prefer higher altitude environments that offer both rainforest and freshwater streams.

How much is a spiny turtle?

Spiny hill turtles sometimes find their way onto the exotic pet market, but they tend to be expensive. That’s because these reptiles are endangered in their native habitats and struggle to live and breed in captivity. It’s not advised to purchase one as a pet.