Each of its eight arms has spines, though they use two filaments to eat.

Click through all of our Vampire Squid images in the gallery. 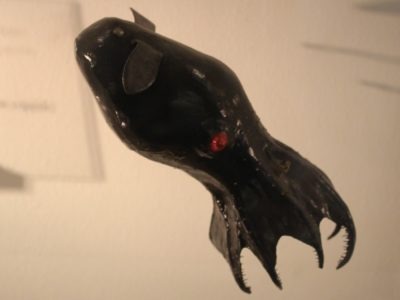 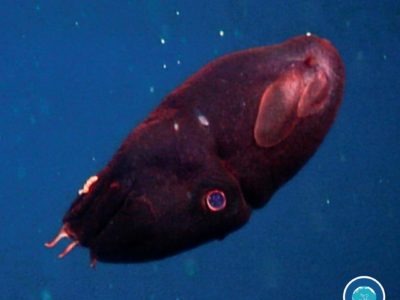 View all of the Vampire Squid images!

The vampire squid is a small cephalopod and is found in the tropical as well as temperate oceans.

They usually exist in the deep seas and use bioluminescent organs and oxygen metabolism to survive parts of the sea that have extremely low levels of oxygen.

This sea creature resembles both squid and an octopus. However, it is none of the two. It has eight arms and two tentacles. The vampire squid’s name comes from its dark color and also the skin that connects it’s multiple arms – forming a cape-like structure.

Vampire squids have two filaments. However, these sea creatures are only able to extend one filament that helps these fishes overcome energy deficiencies in areas where the concentration of oxygen is low.

Obviously, the vampire squid isn’t actually a vampire. In fact, it seems to have come from early ancestors of the octopus, and it is considered to be an extremophile (i.e. lives 3,000 feet below sea level). Despite the name, it isn’t actually a squid, but it does have a distant relation to both squids and octopi.

The order and family that the vampire squids belong to are Vampyromorphida and Vampyroteuthid, respectively.

Currently, there are only one species of these creatures. However, scientists believe that there were others too as some fossils of the species belonging to the same family.

These creatures have gelatinous bodies and are jet black to pale reddish. The body colors depend on the different locations and also on the kind of lighting that the creature exists in.

It resembles both squid and an octopus but is neither. Though the lineage relates them to both, the creature is quite unique with a size that is approximately that of a football. In fact, it is about the same shape as well.
They have eight arms that are webbed together by skin and two tentacles that have spine-like features on them – which is one of the reasons that these sea creatures got their name.

These creatures have red eyes that also sometimes look blue in different lighting and they move forward by ejecting water from a hidden organ. They use bioluminescent organs and oxygen metabolism to survive low oxygen parts of the sea.

These sea creatures are also distributed direction wise. The north-south distribution is usually localized between the fortieth degree north as well as south latitudes. The water in such locations is about two to six degrees.

These creatures are found in the tropical and temperate deep waters all around the globe. Their habitats usually comprise of very cold waters.

The population of the vampire squids is not yet known. However, NOAA has declared these sea creatures to be ‘not threatened’ and it has been said that they are not even slightly dangerous for humans.

Like any other living creature, they are also preyed upon. Meanwhile, they also prey on other living organisms to fulfill their food needs.

Some of the creatures that form the primary predators for these creatures include:

Meanwhile, the vampire squids are detritivores and are the only cephalopods that do not eat live animals. They usually feed on marine snow and detritus that includes fecal pellets and dead planktonic creatures.

Sources suggest that at the time of reproduction, the male passes packets full of sperm to the female. The females then store these packets in pouches until they need the sperm.

The sperm can rest in the pouch or sac for several weeks before they get to fertilize the egg. It is known that one such packet can be observed as a red dot-like structure near the eye of the creature.

The gestation period lasts about 13 months – during which, the female vampire squid doesn’t eat. It is known to often die after giving birth – the cause of which is known to be exhaustion.

The babies usually don’t eat for some time after birth as they are born with internal reserves of energy.

These sea creatures reach sexual maturity for reproduction at about two years of age and are known to constantly reproduce throughout their lives until death.

The lifespan of a vampire squid is usually very long. While the total lifespan is unknown, the adult life stage of the squids can last up to eight years.

Vampire Squid in Fishing and Cooking

There is very little known about whether or not vampire squids can be fished out from the sea by humans and whether or not they can be cooked and incorporated into the human diet.

However, it is known that they aren’t easy to catch because they stay in very deep waters where light can be restricted. Also, they are known to be harmless and are not considered even slightly dangerous for humans.

View all 9 animals that start with V

Where are vampire squid found?

Vampire squids are found in the tropical and temperate waters around the globe and live in 300 to 3000 meters deep sea waters.

No, NOAA has declared that the vampire squids are not even slightly dangerous for humans.

How big are vampire squids?

What Kingdom do Vampire Squid belong to?

What class do Vampire Squid belong to?

What order do Vampire Squid belong to?

What is the scientific name for the Vampire Squid?

The scientific name for the Vampire Squid is Vampyroteuthis infernalis.

How do Vampire Squid have babies?