The reintroduction of wood bison into Alaska is considered one of the world’s best conservation success stories.

Click through all of our Wood Bison images in the gallery. 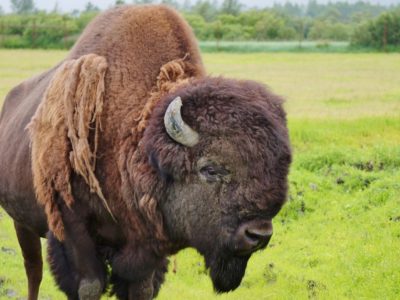 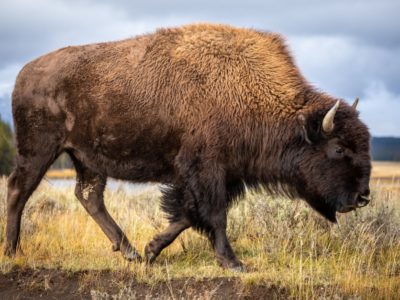 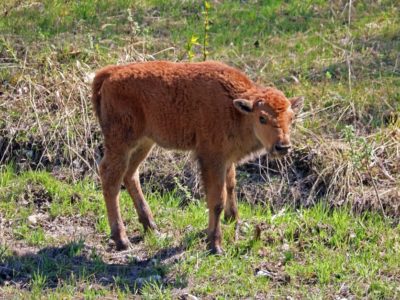 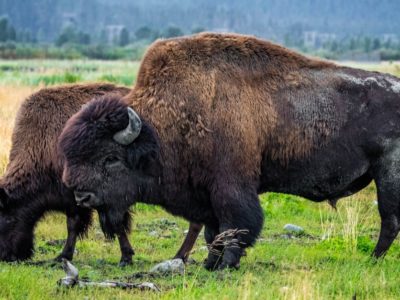 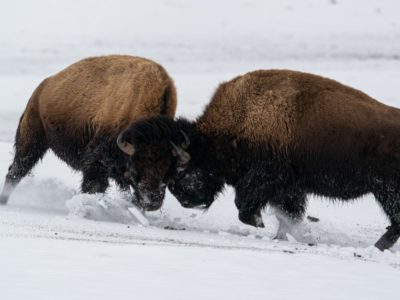 View all of the Wood Bison images!

In March 2011, the first wood bison roamed free on American soil again for the first time in over 100 years. These animals that are the largest North American mammal, weigh about 350 pounds more than the plains bison. Wood bison live in grass and sedge meadows across British Columbia, Alberta, Manitoba, the Yukon, and Northwest Territories. A herd has been reestablished on Alaska’s Inoko Flats along the lower Yukon River. These animals are greatly affected by cold weather and significant snowfalls, which makes grazing extremely difficult.

The scientific name of the wood bison is Bison bison athabascae. That is different than the plains bison that is called the Bison bison bison. There is an excellent chance that both subspecies are descended from the Bison priscus, called the steppe bison. Furthermore, around 1920 when the Canadian government moved large herds of woods and plains bison to Wood Bison National Park, the two subspecies may have interbred dramatically.

Buffalo and bison are only distantly related, even though the terms are often used interchangeably. Buffalo live in Asia and Africa while bison live in North America and Europe. Buffalo does not have humps.

The wood bison is the larger of the two bison species that live in North America. This species stands about 6-feet tall and is about 10-feet long. Males weigh about 2,000 pounds when mature while females weigh about 1,200 pounds.

They are much wider in the front quarter than in the back quarter. This is one of the adaptations that help the animal use its front legs to remove snow easier to get to the grass under it. They have a large hump starting at the base of their necks and sloping downward through the front quarter. This adaptation helps them move their massive head through the snow in the wintertime to graze. The head has large horns that grow straight upward.

Mature wood bison have dark-brown-to-black hair along their legs and lower body. The hair is a lighter color over the rest of their bodies, including the hump. Calves are born with red hair that turns darker as they age. Red hair is one of the adaptations that help calves blend in better to their environment before they are old enough to defend themselves.

These bison has a short tail that is usually about 3-feet long. The tail ends in strands of dark hair.

What is the Difference Between a Wood Bison and a Plains Bison?

Yet, another difference between the two subspecies is that the woods bison’s hump is more pointed than the plain’s bison. Furthermore, when you look at the two species from the front, you will see long strands of hair on the plain’s front legs that are missing or much less prominent on the wood bison.

When examined from the side, the cape on the plain’s bison looks like an addition to its body, similar to a little child wearing a Superman cape. Meanwhile, on the woods bison, the cape looks like part of the natural hair process. The woods bison is also a darker color than the plains bison.

Females and their calves live in groups of up to 60 animals throughout the year. Bulls live in smaller herds. Bison are opportunity eaters who will cover a large territory in search of food. When the food is gone from one area, they roam to another one to find ample food. Herd size often goes up or down depending on the availability of food.

Most of these bison live in captive herds. There is one captive herd in Alaska, one in Sakha Republic, Russia, and the rest are in Canada. The Canadian government considers the herds living in its country to be wild animals. The government, however, has placed restrictions on where these animals can live, so 97.4% of their original habitat is not available to them.

One herd is near Aishihik Lake, Canada. Conservation efforts in this region of the Yukon are underway to return the habitat to its original arboreal forest state.

A final herd was established in Canada along the Etthithun River in northeastern British Columbia. This herd has about 5,000 square acres that it moves across regularly.

These bison are herbivores who dine on a variety of plant life throughout the year. In the winter, about 97% of their diet is sedges. In the spring and summer months, they eat sedges and willows. The bison include lichens in their autumn diet.

Overall, these bison prefer to live in moist sedge meadows during the winter months because it is easier to secure food there. They will use their large heads and neck muscles to move snow to get tasty things to eat. During the summer months, mountain bison often move to willow savannas, where the plants provide a higher amount of crude protein. In the fall, they often live in more wooded areas where lichen is regularly available.

Especially during extremely harsh winters, it is not unusual for up to 20% of mountain bison to starve to death.

Man is the largest threat faced by these bison. Canada still has laws in place allowing animals who are considered nuisances to be killed.

Additionally, the proximity of the bison to domestic cattle has allowed some cattle diseases to be passed into herds. In particular, anthrax was responsible for several mountain bison deaths in Wood Bison National Park and other Northern Canada locations. In about 1963, the government killed almost 600 healthy bison to prevent the spread of the disease further, and you can still see ramifications of that act in the present herd.

Most mating in these bison occurs between July and September. The female gives birth about nine months later. Calves can walk from about the time that they are born.

While females become sexually mature at about 12 months, they often wait until after 18 months to breed. Then, they give birth to one calf every 1-to-3 years. Bulls mature a little slower and often do not reach sexual maturity until they are about 24 months old. They usually do not have a chance to breed until they are about 8 years old because they must wait for stronger and older bison to die or become injured.

These bison are polygamous, with each bull often impregnating numerous cows. Often during the breeding season, a mature bull will protect young cows until they are ready to breed. Then, he will impregnate them.

There are about 4,400 of these bison left in the world. The majority of them live in herds in Canada.

How Many Wood Bison Are Left?

There are about 4,400 wood bison left in the world. One herd of them live in Alaska and another herd lives in Russia. The remaining mountain bison live in Canada. All are in herds are managed by various governments. Many of those herds have been left to go as wild as possible while steps are still taken for supplemental feeding, medication, and herd size limiting at times.

What Is the Difference Between Wood Bison and Plains Bison?

Is the Wood Bison Extinct?

No, the wood bison is not extinct. Yet, it is not found in most of its ancestral territory. Instead, it lives in herds managed by the government. Despite their small number, scientists believe that their number is stable. Therefore, they are not listed as an endangered animal. If their numbers drop significantly, then they could be added to the list of endangered animals. The facts do not change, however, as their are many fewer wood bison today than during the 18th century, so this animal may become endangered again.

Where do wood bison live?

Wood bison live in the Yukon and Northwest Territory of Canada. There is also a herd in Alaska and one in Russia. They prefer to live in moist sedge meadows when the weather is nice, then move to willow savannas once the days get colder before moving to more wooded areas during the winter months.