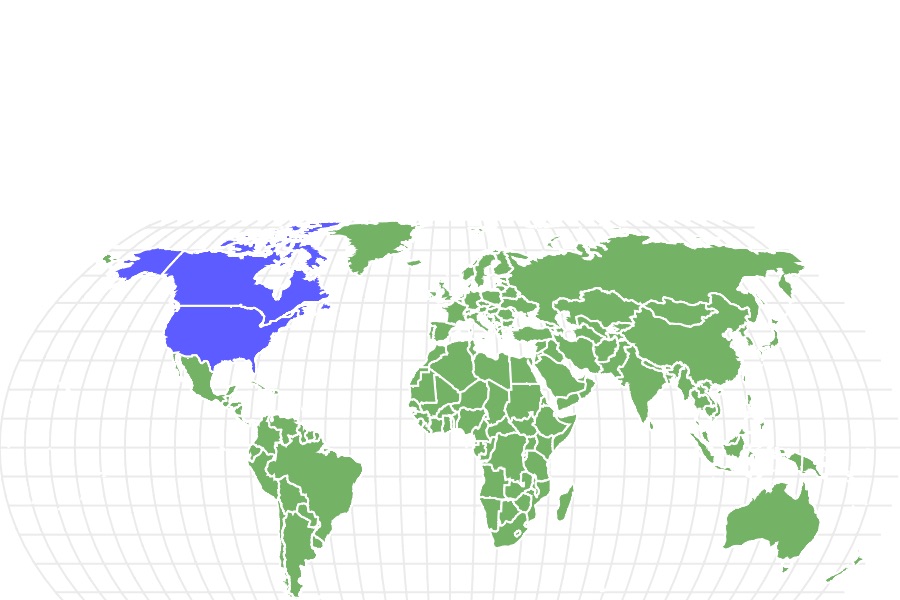 Prey
Insects, slugs, worms, arachnids, and snails
Name Of Young
Tadpoles
Fun Fact
The wood frog lives the furthest north of any other North American amphibian including in the Arctic Circle.
Estimated Population Size
While there are no estimates of the global population size, the overall population is stable.
Biggest Threat
Habitat fragmentation and loss due to anthropogenic causes and natural changes in habitat.
Most Distinctive Feature
Black marking across its eyes
Gestation Period
Between nine and 30 days
Litter Size
Females typically lay between 1,000 and 3,000 eggs.
Habitat
Woodlands and vernal pools.
Predators
Larger frogs, snakes, raccoons, herons, skunks, and mink.
Diet
Carnivore
Type
Amphibian
Common Name
Wood frog
Number Of Species
1
Location
North America, into the Arctic Circle and the Southern U.S.

View all of our Wood Frog pictures in the gallery.

View all of the Wood Frog images!

Did you know that the wood frog lives the furthest north of any other North American amphibian including into the Arctic Circle?

The wood frog has gained scientific attention over the last century because of its terrestrial, habitat associations, freeze tolerance, and long-range movements. The wood frog is the proposed New York State official amphibian. To learn more about the details of the wood frog, keep reading!

Wood frogs fall in the Animalia kingdom, Chordata phylum, Amphibia class, Anura order, Ranidae family, Lithobates genus. Their scientific name is Lithobates sylvaticus which means amidst the trees. Lithobates is Greek for “a stone” (Litho) and “one that walks or hunts” (bates). Sylvaticus is a Latin word for “amidst the trees.”

Wood frogs are commonly around 3 inches long and feature rust red, brown, grey, or tan skin with bumps. The most recognizable feature of the wood frog is the black “robber’s mask” on its face and the yellow to greenish-white belly with a stripe on its upper lip. Given their color, wood frogs tend to blend in well with their surroundings, especially in the forest.

These frogs typically return to the same ponds to breed every year and migrate within the same area their entire lives. While they gather in large numbers during mating season at breeding pools, they are mostly solitary creatures.

These frogs live in ponds, wetlands, and forests ranging from as far north as the Arctic Circle to as far south as Alabama but are mostly found in Alaska. Adult Alaskan frogs spend the summer in moist woodlands, ravines, bogs, and forested swamps. In the fall, Alaskan frogs migrate to nearby uplands with some remaining in moist areas throughout the winter. Wood frogs are diurnal and rarely seen during the nighttime hours, except to breed. In the winter, they freeze until their heart stops then rethaw in the spring. A group of Alaskan frogs is called an army and a group of young frogs swims together in schools, like fish.

What Eats a Wood Frog?

Adult frogs have numerous predators including Gartner snakes, water snakes, ribbon snakes, larger frogs, herons, skunks, mink, and raccoons. Snakes can sneak up on these frogs on land or in water and quickly eat them whole. Flying and land animals can only attack wood frogs while they are roaming on land or near the edge of the water. Tadpoles are eaten by diving beetles, Ambystoma salamander larvae, and water bugs. Tadpoles are captured underwater or as they surface by these predators. Also, as deforestation and the draining of ponds continues by humans, entire populations of wood frogs in some areas are becoming non-existent. Overall, there is no current endangerment to wood frogs.

What Does a Wood Frog Eat?

Adult frogs dine on arachnids, slugs, worms, snails, and insects by catching them with their sticky and long tongues. Tadpoles eat decaying plant matter and algae, as well as the larvae or eggs of other amphibians.

This frog’s mating season occurs in the spring when thousands of wood frogs descend on vernal pools. Males seek females and clasp to them from behind in a position known as amplexus. Males cannot identify females by smell or sight so they must hug potential partners. The female feels fatter than the male because she is carrying thousands of eggs. Some males make mistakes and have attempted amplexus with other frog species, toads, and salamanders. Males sometimes cling to each other and form long chains of a single female with multiple males who cling to the male in front.

Amplexus stimulates egg laying so as soon as the eggs are released, they begin to swell, and the male must fertilize the eggs immediately before they swell up. Therefore, the first male in the chain fertilizes the eggs and won’t let go of the female frog until all eggs are released which begins the young frog’s life cycle. During this entire process, males can be heard making a quack-like call around the clock. This is considered their mating call to entice females into reproduction. This is a unique call that is different from the regular sounds frogs make. The gestation period occurs between 9 and 30 days from fertilization. One of the most interesting facts is the female can lay up to 1,000 eggs, resulting in hundreds of tadpoles who survive.

Immediately after hatching, tadpoles are black and only a quarter of an inch long. They typically remain close to the egg mass for a few days to graze on symbiotic algae before swimming around in the pool. In addition to algae and other small plants, wood frog tadpoles also eat larvae and the eggs of other amphibians, including other wood frogs. One of the greatest protective advantages of a tadpole is its ability to swim quickly to evade predators. Also, they can breathe underwater since they are born with gills. Interestingly, tadpoles can distinguish between colors and follow rotating patterns but do not have the best sight.

The average age of the male and female frog is around three years.

There have been no significant changes in the abundance or distribution of these frog populations over the years. However, some areas have seen a population decline because of the draining of breeding ponds and elimination of forest habitats. The total population of wood frogs in the world is unknown.

Wood frogs contain poisonous glands that secrete a mild toxin onto their skin which could harm smaller animals and other potential small prey. However, wood frogs pose no threat to humans if touched. It is important to note, wood frogs are highly toxic and can be deadly to pets if in contact with their skin or if the pets eat them.

Can wood frogs survive being frozen?

Yes, while the wood frog is freezing, its heart pumps protective glucose around the body at the beginning of hibernation. However, the frog’s heart starts to slow and eventually stops once frozen. This puts them in a state of hibernation and allows them to survive throughout the winter while frozen. During hibernation, the frog experiences cycles of freezing and thawing, which is part of its life cycle. Unfortunately, If the environment becomes too cold then the frog will die.

What can wood frogs do?

It is a fact that wood frogs eat various forest-floor, small invertebrates while tadpoles are omnivorous and dine on plants, algae, eggs, and larvae during their short life cycle. Wood frogs are quick and can jump up to six feet in distance.

How long do wood frogs live?

Wood frogs can live up to three years.

Yes, many individuals keep wood frogs as pets because they are cute, small, and easy to maintain if you take the time to research their habitat, behaviors, and food requirements.