Written by Cindy Rasmussen
Published: April 28, 2022
Share this post on:
More Great Content:
Cutest Bat: Which Bat Species is The…
What Do Bats Eat? 14 Foods in…
Baby Bat: 5 Pictures & 5 Facts
Bat Predators: What Eats Bats?
Bat Teeth: Everything You Need to Know
How To Get a Bat Out of…

You may have an image from a movie of hundreds of bats soaring out of a cave and attacking an innocent hiker. Or maybe you are thinking of vampire bats that suck blood! (They don’t really suck blood, but we will learn more about that later.) Do bats live up to these reputations? Are bats dangerous? Are bats poisonous or venomous? Do bats carry diseases? Let’s find out about scary-looking bats.

Bats are mammals! They may look like rodents with wings, or birds with sharp teeth, but they are not related to mice or birds. Bats are normally about the size of a mouse, are covered in fur (except their wings) and have large pointed ears. There are around 1,300 species of bats with 47 species living in the United States. Bats are nocturnal and come out at night to fly around looking for food. They use echolocation to locate insects like mosquitoes and moths that they catch while they are flying. Some bat species eat fruit and nectar instead of insects. Bats can be found all over the world and can adapt to a variety of habitats. A common place to find a group of bats is in caves, like the Bracken Caves in Texas which is home to 15-20 million Mexican free-tailed bats!

Bats are not dangerous in the sense of attacking humans, but bats are dangerous because they carry diseases. The biggest danger is rabies. However, according to the CDC, “dog rabies remains common in many countries and exposure to rabid dogs is still the cause of over 90% of human exposures to rabies and of 99% of human rabies deaths worldwide.” So although bats can be carriers of rabies, dogs are much more dangerous carriers especially in lower-income countries.

Do all bats carry diseases?

No, not all bats carry diseases but it is not always easy to know if a bat has rabies. A bat that is out in the daytime or on the ground could be sick and could have rabies so be sure to never handle a sick or injured bat. The USGS reports that less than one percent of bats have rabies, so they are not the most common carrier of the disease.

Can you die from rabies?

Yes, rabies is a deadly disease, but it can be treated with a series of shots, called PEP (Post- Exposure Prophylaxis). Vaccinations are extremely important in preventing rabies and are readily available in the United States. However many countries that don’t have access to public health resources and vaccinations have a huge problem with rabid dogs. In the United States only 1-3 people die from rabies each year. Worldwide the number is 59,000!

Has anyone ever died from a bat?

Yes, in 2021 there were five cases of people that died from bats in the United States. In all five cases the people did not get the PEP vaccinations after exposure. One of the cases the person picked up a bat with their bare hands and the other two had a bat roosting in their home. You can be exposed to rabies without a deep bite. You can get a small bite or scratch and not even know it. That is why it is extremely important to seek medical care if you think you have had contact with a bat. An average of 60,000 people in the US receive the PEP vaccinations after exposure to bats, dogs, raccoons or other animals they had contact with.

Bats do not attack people. They are not aggressive and do not seek out people. Some people fear having a bat fly into their hair and thrash around, but this is very rare. Most bats will avoid people and fly away if people approach.

Vampire bats are not dangerous although they do sometimes bite humans, but this is rare. They do need blood to survive but they do not suck blood like we think they do. They make a small incision with their teeth and then lap up the blood, usually from cattle, chickens, pigs and horses. But vampire bats are small and they can make such a small incision that large animals may not even notice the bats are feeding on them. It does not harm the animals.

Are there vampire bats in the United States?

No, there are not any vampire bats in the United States. There are vampire bats in Mexico just over the border so it is quite possible that they migrate north just a bit into Texas, Arizona and California. For now they are only in Mexico, Central America and most of South America.

Can a group of bats be dangerous?

A group of bats is called a colony or a cauldron of bats. Colonies can get to be quite large with the largest colony in the world being in Texas, just north of San Antonio. The Bracken Caves are home to 15-20 million Mexican free-tailed bats. If you join the Bat Conservation International you can join in on member-only observation nights during the peak times when the most bats congregate. But would this be dangerous? Not necessarily, in general bats are going to avoid humans and they do not attack people like a swarm of bees might.

Can giant bats be dangerous?

The biggest bat in the United States is the Greater Mastiff Bat that can get to be seven inches long and have a wingspan of 20-22 inches. They currently live in Texas, Arizona, and California. The biggest bats in the world are flying fox bats like the Gigantic Indian Flying Fox bat (sometimes called the Golden-Crowned Flying Fox Bat). They are generally 7-11 inches long, but some can get to be 17 inches long and have a wingspan of 5 feet! To put that into perspective, an average Chihuahua is 10-15 inches long, so imagine a large Chihuahua with wings!  They live in India, China, Bangladesh and the Philippines, in a variety of habitats. They do not swoop down and snatch up children or attack people, but they can carry diseases. There is a variety of disease they can carry depending on their location like the Hendra virus or lyssavirus. Keeping your distance from bats is the safest way to avoid any contact and limit the chances of any diseases. 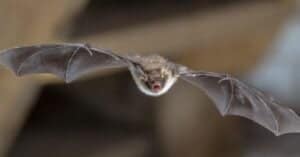