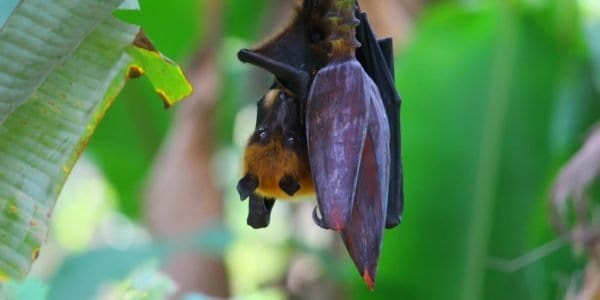 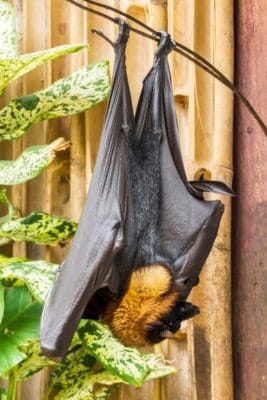 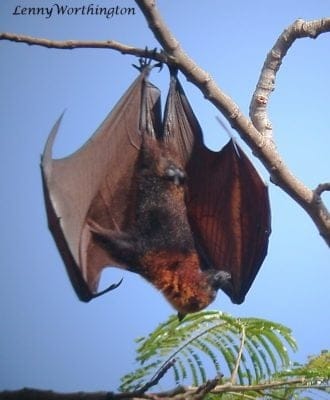 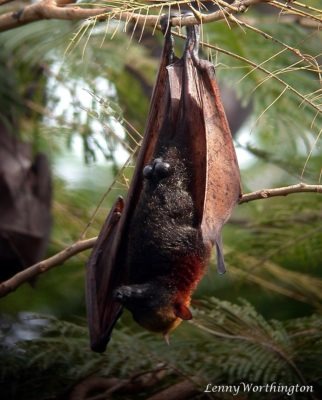 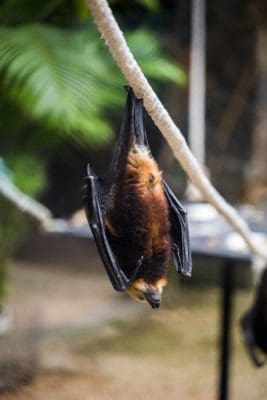 The golden-crowned flying fox has a wingspan of up to five-and-a-half feet.

The bat lives in the jungles of the Philippines, in colonies of up to 10,000 members. Though it has a large wingspan, this bat is small physically, with a body that measures between 7 and 11.4 inches long. The golden crowned flying fox eats only figs and other fruit and ignores things such as blood and other food from mammals in its diet. They are unable to echolocate and instead must depend on sight for their navigation.

The scientific name of the golden-crowned flying fox is the Pteropus jubatus, which comes from the Latin for having a crest or from being crested. It gets this name because it is crested with a mop of golden hair. Two different golden-crowned flying foxes exist with similar names, one of which is the A. Jubatus jubatus and the other which has the name A. jubatus mindanensis. The bat is one of the largest on the plant, with a wingspan reaching 5.5 feet in length.

The golden-crowned flying fox is a large megabat that eats figs as well as additional plants such as leaves from various plants. The bat is oversize, with wings stretching out as much as 8.5 inches from its body. The bat weighs about 3 pounds. Its long, skinny body stretches out between its wings and is covered with short hair colored both black and golden. The black hair covers its chest and back and the golden hair covers much of the flying fox’s head. Some parts of the animal are covered with maroon hair as well. It has small hands on the end of its two upper wingspans and two small feet on the base of its legs. Although they are protected, their conservation status is poor and the population size continues to shrink.

One of the things that the golden-crowned flying fox does is to live along the rivers. Experts believe they do this to be able to find food to eat all of the time, as figs and plants with leaves are always available along the waterways. This way they can go up and down the rivers, searching for food as the night progresses.

While the bats tend to limit themselves to mostly nighttime activities, making them nocturnal, they also participate in some activities in both the late afternoon and the early morning. Such activities include the elimination of excess waste and self-grooming activities. They may also engage in fighting and mating, usually in the morning.

The golden-crowned flying fox lives exclusively in the Philippines. They don’t appear naturally anywhere else in the world. They live in both deep caves and in the rainforest along or near waterways. They may live on one island and transfer to another island to forage, flying a great distance each time.

This bat often lives together with other giant megabats such as the large flying fox, foraging for food when it is time to fly. The species used to number in the tens of thousands, but they now number less than 5,000, with many groups even smaller than that. The bat is endangered now and may disappear if it is not conserved.

Most of what the golden-crowned flying fox eats is figs, but they will also consume leaves of various varieties when figs aren’t available or when the figs are thin. They may also consume regional fruits such as lamio, tangisang, puhutan, bankal, bayawak, and strangler figs.

The figs are present in about 79% of the bat droppings, shown by the counting of the seeds of left-over figs found in the bats’ droppings. They don’t appear to eat any other foods except those already mentioned and leaves.

The golden-crowned flying fox is preyed upon by several different predators including reticulated pythons, eagles, and humans.

Many of the golden-crowned flying foxes have been shot by human hunters to provide bushmeat for other humans. It is estimated that the population has been reduced by half since 1986.

These bats are protected in the Philippines, providing conservation for the future, but that typically makes very little difference to the ultimate survival of the bats and they continue to be endangered.

People continue to hunt them for food. Even where the hunting regulations are imposed the bats are disturbed by humans who want to see them in the daytime. This means that bats are continually disturbed during the daylight hours, making it difficult or even impossible for normal resting or breeding.

The current status of the golden crowned flying fox is endangered.

Not much is known about the reproduction of this bat What is known is that the females of the species have a single baby once a year, in April, May, or June. The babies are called pups, and the parents are simply called male and female. All of the species are endangered and must be watched or they will disappear.

Males tend to be polygamous, with males mating as many females as possible during each breeding season. It isn’t known for sure how long the females are pregnant. Once the baby is born it clings to its mother and she keeps it cool by fanning it with her wing. The baby is ready to breed herself when she is about two years old.

Is a Golden Crowned Flying Fox an omnivore, herbivore, or carnivore?

The golden crowned flying fox is frugivorous, which means that it eats fruits. It also eats leaves, so it is essentially an herbivore.

How big does a golden crowned flying fox get?

A golden crowned flying fox is one of the largest bats there is. They weigh in at about 3.1 pounds. They have huge wings, spreading as wide as a woman is tall, 5.5 feet.

Where does a golden crowned flying fox live?

These bats live only in the Philippines, dwelling in deep caves as well as nesting by the thousands in trees near the water.

What does a golden crowned flying fox eat?

The bats are mainly frugivorous, with the main food of a golden crowned flying fox consisting of mostly figs of different types. They also eat leaves of various trees when figs are not readily available.

Yes, a golden crowned flying fox does fly. They are bats and they fly the same as other bats do. They do not use echolocation, instead of using only their sight to see where to fly.

Golden crowned flying foxes are not dangerous to humans, despite the fact that they are a very large type of bat.

What efforts are being made to protect and preserve the golden crowned flying fox?

There are laws in place in the Philippines that are intended to protect this megabat, but these laws are not very useful. People continue to ignore the laws, for the most part, causing the bats to get reduced even further and causing problems with its conservation. In some places, the bats are protected and it is observed, but because people continue to ignore many of the warning signs the bat population continues to shrink.