iStock.com/JZHunt
Share this post on:
More Great Content:
Raccoon Poop: What Does Raccoon Scat Look…
What Do Raccoons Eat?
How and Where Do Raccoons Sleep? Everything…
Baby Raccoons: 5 Incredible Facts & 5…
Raccoon Lifespan: How Long Do Raccoons Live?
Red Panda vs Raccoon: 5 Key Differences

Raccoons are medium-sized mammals that are native to North America, Mexico, Europe, and Japan. They are easily distinguished by their bushy tail and unique markings.  However, one of the questions that are often asked about them is, “are raccoons rodents?” This is partly because they are often seen in urban areas and the pest status that is usually attached to such sightings.

In this article, we’ll take a closer look at these fascinating animals and discover whether they really are rodents. We’ll look at what is unique to rodents and find out whether raccoons share the same characteristics or not.  We’ll also discover more interesting facts about raccoons, including which one is critically endangered.  So join us as we find out whether raccoons are rodents!

Raccoons are well known for their distinctive black and white appearance. They have unique rings around their eyes which are often described as “bandit masks.”  They thrive in areas with trees and are often found in moist woodlands and mountainous regions. However, many raccoons have also adapted to an urban habitat.

Raccoons are excellent swimmers and can remain in the water for several hours without suffering any ill effects.  They are also extremely intelligent and have a superior sense of touch.  This is because they have incredibly sensitive and nimble paws. They use these to grasp and manipulate things with remarkable ease.  This, along with their natural curiosity, often leads to them being thought of as mischievous.

Rodents are often characterized as pests because when we think of rodents, most people probably immediately think about rats and mice.  However, rodents are one of the largest and most diverse groups of animals globally.  Although most typically have stocky bodies, short limbs, and long tails, they can come in all shapes and sizes.  They live in a wide range of habitats and are found everywhere except Antarctica.  The majority of rodents are herbivores, although some are omnivores.

All rodents have one particular thing in common – constantly growing teeth.  Rodents have four incisors (two upper and two lower) which grow continually.  One thing that gives rodents a bad reputation is their habit of chewing on virtually anything they can get their teeth into – particularly things they shouldn’t.  However, rodents actually have a reason for chewing a lot.  In fact, the reason they chew so much is to prevent their constantly growing incisor teeth from becoming too long for their mouths.

Rodents also have a unique feature that allows them to constantly gnaw without their teeth becoming blunt – self-sharpening teeth. Rodents’ teeth are self-sharpening because they are coated with tough enamel on the front and softer dentin on the rear.  The constant gnawing moves their teeth in a scissor-like action. This causes the softer dentin to wear away quicker than the tougher enamel.  The way that they wear down creates a chisel-shaped tooth.  This unique edge is permanently sharp and extremely effective at chewing through wood, bark, fruit, nuts, seeds, and grains.

Raccoons are not rodents.  Despite their appearance, raccoons and rodents are not related and are classified completely differently.  Raccoons have a much smaller range than rodents and are not quite as varied in their habitat.  They also have very different teeth, which are adapted to their diet and lifestyle in different ways.

As mentioned earlier, rodents are one of the largest and most diverse groups of animals.  All rodents are members of the Rodentia order, which is the largest order of mammals.  Around 40% of all mammals are rodents, and there are more than 2,000 species in the Rodentia order.  Members of the rodent order include beavers, guinea pigs, squirrels, prairie dogs, porcupines, and capybaras (the largest rodents in the world).

As raccoons are members of the Carnivora order, they naturally have very different teeth from rodents. They lack the ever-growing incisors that rodents are famous for a start.  Instead, they have twelve incisors (six upper and six lower), which are small and sharp but have a fixed size.  Additionally, raccoons have canine teeth, which rodents lack.  Canine teeth are the sharp, pointy ones known as fangs.  The canine teeth are typically used to bite and kill their prey.

As meat-eaters, members of the Carnivora order typically have teeth that are highly adapted for their diet. Most carnivorans have prominent carnassial teeth, which are blade-like teeth that work with a scissor action.  Carnassial teeth are typically used for chewing prey.  However, as omnivores in the Pryconidae family group which has already been mentioned, raccoons have lost some of the adaptations that are typical of carnivores.  In this case, raccoons’ carnassial teeth are quite poorly developed.  This is because while raccoons eat meat in the form of insects, worms, frogs, and fish, they also eat eggs, fruit, nuts, and acorns. 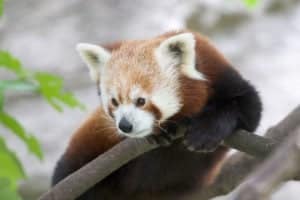