Stingrays look like giant swimming pancakes. Most are round or kite-shaped and have a long whip-like tail. There are no bones in their body. Instead, their form is made from cartilage, like human ears. Their skin looks like shark skin and is grey, tan, or brown.

Most stingrays are about 10 to 20 inches in diameter but some can get quite a bit bigger. Do stingrays have stingers on their tails?

Do all rays have stingers on their tail? They sound like docile animals so are stingrays dangerous?

Do stingrays have a stinger?

Stingrays have a stinger on their tails. It is a sharp barb that stingrays use in defense. They do not use their stinger to hunt prey, it is only used in defense. Their tails are whip-like and they use the power from their tail to inject the stinger into the predator. Not only does it provide a painful sting, but it also releases toxic venom.

Yes! Stingrays are dangerous because they can sting you. The stingers on their tails are venomous and harmful to humans. Yet, it’s also important to note that while stringrays can be harmful, there are generally only one or two fatal attacks reported each year. That is to say, death from a stingray is extremely uncommon.

What Happens if You Get Stung by a Stingray?

If you get stung on the ankle for example it would feel very painful at the sting site, similar to a bee sting. The barb of the stingray would go into your skin and tissue and remain there, releasing venom. According to WebMD you should:

Lifeguards at beaches where there may be stingray are trained in first aid for stingray stings. They will have large buckets that you can soak your foot in to help ease the pain. You may develop symptoms from the venom, depending on the species that stung you, but most people just have localized pain.

A person with sensitivity to the venom may have symptoms of nausea, dizziness, and fever. Seek medical attention if any symptoms arise.

What Kinds of Stingrays are Dangerous?

Rays, like the giant manta ray, have a similar body shape and even a long whip-like tail, but their tails do not have any stingers (or barbs).

Some of the most common stingrays are the following:

Are stingrays only found in the ocean?

Yes! According to the Smithsonian National Zoo, “Although docile creatures, they inflict more human injuries yearly than any other animal in Amazonian rivers.” Freshwater stingrays can get to be 18 inches wide and have a tail that is a foot long. Giant freshwater stingrays are even bigger.

How big is the largest stingray?

The giant freshwater stingray can get to be 13+ feet in length! An average bedroom is only 10 ft x 10 ft, so it is bigger than that! They can be found in the rivers of Australia, China, Indonesia, Cambodia, Thailand and Vietnam. The largest stingray ever caught was by Jeff Corwin on the Mae Klong River in Thailand. It is the largest freshwater fish caught by a rod and line. This stingray was 14ft x 8ft! Incredible! They created a special pen to hold it while they examined it and got accurate measurements. Can you believe that a stingray could weigh 800 lbs? This one did. Your average Grizzly bear weighs 800lbs, that is a big fish!

How big is the largest stinger?

No, stingrays do not attack people. They are solitary and docile and prefer to be left alone. The most common time people get stung is when they accidentally step on one. Some stingrays, like the southern stingray and round stingray, burrow under the sand close to the shoreline.

So when people wade into the ocean for a swim they accidentally step on one or startle one and it whips its tail in defense.

What is the “Stingray Shuffle”?

The “Stingray Shuffle” is a way to enter the water at the beach to let stingrays know you are near. By slowly shuffling your feet as you walk into the water the stingrays are given time to scuttle away.

If stingrays don’t attack people how did the Crocodile Hunter die from a stingray?

The TV host, Steve Irwin (the Crocodile Hunter), died while filming for a show called Ocean’s Deadliest. They were out in Australia’s Queensland’s Batt Reef and came across an eight-foot-wide stingray. They knew that stingrays typically swim away from humans so they thought it would be safe enough to get some footage with Steve in the water.

Typically stingrays do swim away but this time it was a freak accident that the stingray whipped its tail in Steve’s direction and the long sharp barb punctured his heart. Although they were able to get him back into the boat, he died by the time they got him to the medics.

How common are stingray stings?

Being stung by a stingray is not that uncommon. With millions of visitors to beaches every year beach-goers, swimmers and divers are at risk of getting stung. Luckily, most stings are just mild cases. It is extremely rare that a stingray sting is fatal, so although stingrays are dangerous it is not a reason to avoid the beach. 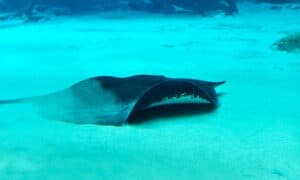