Discover The 7 Largest Animals In Virginia, and Where You’ll Find Them

Although Virginia is typically known for its rich history rather than its wilderness, the state still has quite a few interesting species living within its borders. Some of these species are even quite large, like the Chincoteague ponies. Yet, the state is also home to many other sizeable beings, and those are the ones we’ll focus on today. Get ready to learn about seven of the largest animals in Virginia!

What Are the 7 Largest Animals in Virginia?

We’re not just going to count down the largest animals in Virginia that live on land. After all, there’s a wealth of big creatures waiting to be discovered. That’s why our list of the largest creatures will include mammals, fish, and more! Without further ado, let’s get started looking at and counting down these cool and sizeable animals.

The blue catfish is one of the largest animals in Virginia’s waters. The largest one ever caught measured 65 inches long and weighed 143 pounds.

This massive specimen was caught in Buggs Island Lake, one of the better places to catch this species. You can also find them in rivers such as the Appomattox and the Rappahannock Rivers.

Although the blue catfish is one of the biggest fish in Virginia, you can see massive sharks off the state’s coast, including tiger sharks.

The mute swan is a very large bird that is typically found only in the Chesapeake Bay area of the state. That being said, they’re becoming more common on the east coast of the state. These birds are large and beautiful. They’re mostly white birds with black markings around their eyes and bill. Speaking of the bill, it is bright orange.

As one of the largest animals in Virginia, you can expect to see a wingspan that reaches almost 8 feet in length when they unfurl them.

These swans reside in the state all year long, too. That doesn’t mean it’s a good idea to approach them while they’re eating their favorite aquatic vegetation. Just admire them from a distance.

The American black bear is the only bear found in the state, and it’s easily one of the largest animals in Virginia. Although it’s commonly encountered in wooded areas and forests, it can also be found in swampy areas of coastal plains.

The black bear is not something you’ll want to get close to. These bears have more than enough power to seriously harm or kill a person. They grow up to 6 feet long and weigh up to 500 pounds or more when fully grown. Remember, their length becomes height if they stand up, so they can tower over most people.

Although the eastern black rat snake is shorter than the western variant, it is still the longest snake on average in Virginia. This snake can reach over 7 feet long, and some come close to the 8-foot mark. Most of the time, the dorsal portion of their body is black, but they can have white markings on the ventral side.

Eastern black rat snakes are often found in forested wetlands, farmlands, and even suburban areas that have the right type of prey around them. They are not venomous. Yet, that doesn’t mean you should attempt to handle it. They can still deliver a painful bite.

The eastern hellbender looks almost unearthly with its wide-set eyes, dark brown or almost black coloration, and paddle-shaped tail. These are fully aquatic salamanders, and they can grow up to 2.5 feet long at their greatest!

The eastern hellbender is almost exclusively found in the southwestern part of the state. They live in rivers such as the New River, Powell River, and other fast-running streams. Although some people believe that they are venomous, that’s not actually true. These salamanders spend a lot of their time hiding under rocks and debris to stay out of sight.

The Cecropia moth is a very large insect that has a total wingspan that measures between 5 and 7 inches. This critter is usually seen in the late spring and early summer when it emerges from its cocoon. Sadly, the moth only lives for about two weeks so that it can breed.

The moth itself has a reddish body, black or brown wings, and stripes on the wings consisting of the colors tan, white, and red. They live in hardwood forests, but they can also wander toward bright lights like those found on porches and stores.

Last but not least on our list of the largest animals in Virginia is the dark fishing spider. This is the biggest spider in the entire state, and it’s a rather large one measuring upward of 4 inches or more.

Dark fishing spiders can be found throughout the state in wooded areas near lakes, rivers, and other bodies of water. They are frequently seen chasing prey by running across the water. Fishers commonly see these spiders on docks and boats, too. Although they are big, they won’t hurt you even if they did deliver a bite.

Now that we’ve covered the largest animals in Virginia, it’s clear that the state has a decent number of sizable creatures. Should you see any of the dangerous animals from this list, like the black bear, it is best to stay away and keep safe. Wild animals aren’t very forgiving when it comes to human intruders. 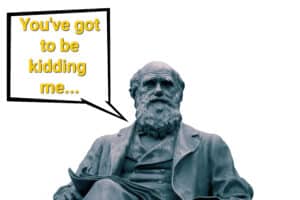