Despite its fearsome reputation, many find the honey badger strangely adorable. Its unique appearance, along with its sudden internet fame thanks to the Honey Badger Don’t Care viral video and meme back in 2011, has made it the object of many exotic pet owners’ affection in recent years. But can the fierce and notoriously aggressive honey badger ever actually be kept as a pet, or do they belong in the wild?

Let’s take a closer look at the honey badger and whether or not keeping one as a pet is a good idea or an ill-informed recipe for disaster.

What Are Honey Badgers?

Honey badgers are small, carnivorous mammals. They are mustelids within the Mustelidae family, the largest group within the Carnivora family. This makes them fairly closely related to ferrets, weasels, otters, martens, wolverines, and minks. More specifically, they are classed within the Mellivora genus, in which they are the only living members, Mellivora capensis.

Oddly, honey badgers are more similar to weasels than most other badgers. They were originally defined and classified taxonomically in 1777 by a German naturalist, Johann Christian Daniel von Schreiber. Interestingly, two other much larger members of the Mellivora genus, Mellivora benfieldi and Mellivora sivalensis, lived in the Pliocene era millions of years ago and are now extinct.

For a brief period in the mid-1800s, honey badgers were classified along with other badgers taxonomically. However, they were later placed within their unique subfamily, as they don’t quite fit in with typical badgers anatomically. Today, there are 12 subspecies of honey badgers. All of these subspecies live either in the Middle East or sub-Saharan Africa.

Physically, honey badgers are larger than most mustelids aside from wolverines. They typically measure around 9.1 to 11 inches tall at the shoulders and can be about 22 to 30 inches long, with the tail adding another 5 to 12 inches. Of all known badger species, honey badgers are one of the largest and most aggressive. They have uniquely tough skin and very sharp claws and teeth, making them skilled hunters designed perfectly for fighting. These traits also mean honey badgers have very few natural predators.

Honey badgers are highly opportunistic omnivores that eat honey, birds, insects, reptiles, and some mammals. They typically hunt and search for food either alone or in breeding pairs. Thanks to their ferocious, highly aggressive nature and tough, rugged skin, honey badgers attack virtually anything approaching them or their burrows, including much larger animals like hyenas.

True to its name, the honey badger often feeds on honey by seeking out and destroying beehives. While most animals of its size wouldn’t bother with bees, the honey badger doesn’t fear being stung one bit! Its extremely thick skin makes it invulnerable to bees’ and other insects’ stings.

Aside from its favorite food, honey, the honey badger also feeds on a wide variety of different animals and vegetation. Some of its most common fares include:

As you can see, honey badgers aren’t particularly selective with their prey. They indiscriminately eat every last bit of their kills, gladly gobbling up not only meat and flesh but also skin, hair, bones, and feathers. They’ve also been found to attack highly venomous snakes and larger mammals like sheep and goats. They will even attempt to dig up and feed on human corpses in some areas. Unfortunately, as we’ll cover in more detail below, all of this makes honey badgers very difficult to feed as pets.

Are Honey Badgers Legal to Keep as Pets?

Unfortunately, honey badgers are off-limits and illegal to keep as pets in most developed countries. They are banned in nearly all US states as well. Only licensed wildlife facilities like zoos can legally own and house them for the most part. They are incredibly costly and time-consuming animals to properly care for in captivity.

As we’ll cover in the next section below, there are many valid reasons why ownership of honey badgers by average civilians is highly inadvisable. For starters, they are highly aggressive and dangerous animals that will not hesitate to attack humans. More importantly, they cannot reasonably be tamed in captivity.

Since they are illegal to own in most world areas, honey badgers do not make good pets. The tight restrictions on the ownership of these animals exist to keep them, humans, and other animals safe.

The main reason why honey badgers are not suitable as pets is that they are inherently wild, vicious animals that do not become more tame or docile over time. They are more likely to become far more aggressive and angry in captivity.

Additionally, as we’ve covered in detail earlier, honey badgers are dangerous animals despite their fairly small size and cute appearance. They will readily attack dogs, cats, birds, and most other common pets with their sharp, strong claws and teeth. This makes it difficult for them to live alongside other domesticated animals. They’re also very temperamental, unpredictable, and even aggressive towards humans.

Currently, there is no valid reason to domesticate honey badgers, even if domestication was remotely possible for the species. If you’re set on having a mustelid as a pet, consider something smaller and more docile, like a ferret. 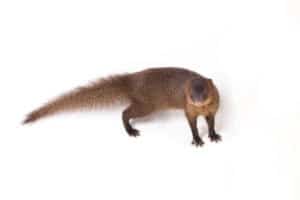 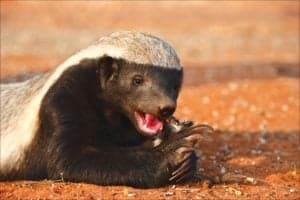