Uninhabited islands are islands with no permanent human habitations. They are sometimes used for agricultural and industrial purposes. Likewise, some of these islands are useful breeding grounds for various wildlife species. The big question is – Why is no one living on them? Truth is, uninhabited islands remain uninhabited for a reason –if not, people would have colonized them by now. There are more than 2 million uninhabited islands in the world. Some are protected as nature reserves, while some are owned by private individuals or groups. Some others remain inhabited due to political or religious reasons. Surprisingly, they’re not all completely creepy, some of them are literal “paradise on earth,” serving as great tourist attractions to people from all corners of the world. Aside from these, the reason why many islands are uninhabited remains largely unknown.

Here’s a list of 10 notable uninhabited islands from across the world and why no one lives there.

10 Uninhabited Islands From Across the World

Located in Baffin Bay, Canada, Devon Island is the largest uninhabited island in the world. With an area of 21,331 square miles, it is also the 27th largest island in the world —its area is just slightly smaller than Croatia! Devon Island was not always uninhabited though. People called this place home till the 1950s when the last permanent residents left. The Haughton Impact Crater, a huge hole measuring over 12 miles in diameter, was formed 23 million years ago on the island.

Scientists found that the surface of this island had a striking similarity to that of Mars, and this has led them to use it as a site for equipment testing and to simulate travel missions to Mars. Devon Island is a vast and barren island in the Arctic with a cold and dry climate, making it hardly welcoming for anyone to inhabit.

An overseas state private property of France, Clipperton Island has had no permanent inhabitants since 1945. It is an uninhabited 2.3 square mile coral atoll in the eastern Pacific Ocean. Following the escalation of fighting in the Mexican Revolution, many residents died, while the last surviving islanders – four women and seven children – were rescued by the U.S Navy. Except for occasional visits by fishermen, French navy controls, film crews, and scientific researchers, the island has been completely abandoned by its inhabitants since the end of World War II. Today, Clipperton Island has become a popular site for transmissions by amateur radio operators.

Lying 12 miles southeast of Lord Howe Island in the Pacific Ocean, Ball’s Pyramid is a 1,844-foot high rock island named after Royal Navy Lieutenant Henry Lidgbird Ball, who reported discovering it in 1788. The pyramid is positioned in the center of a submarine shelf and is surrounded by rough seas, making any approach difficult. Steep, eroded, and formed 6.4 million years ago, it is a remnant of a shield volcano and caldera. In 1986, all access to the island was banned by the Lord Howe Island Board. Later, the policy was relaxed to allow some climbing under strict conditions. It is interesting to note that the last known wild population of the Lord Howe Island stick insects can be found in Ball’s Pyramid.

Often called Rabbit Island because of the numerous rabbits that roam the island, Okunoshima Island is uninhabited by humans. It is a small island in the Inland Sea of Japan that was used as a poison gas factory for much of the chemical warfare carried out in China during World War II. This whole scheme was kept a secret for so long until 1988 – when the Poison Gas Museum was opened in Okunoshima to educate people about the Island’s dreadful role in poison gas production. The ruins of the old forts and the gas factory still exist all over the island, but entry is restricted as it is too dangerous. Hunting the large population of rabbits on this island is forbidden, but tourists are allowed to interact with them.

The Maldives Islands in the Indian Ocean are home to about 1,192 islands grouped into 26 coral atolls, but only 187 are inhabited by local Maldivian people. Undoubtedly, there are more deserted, uninhabited islands than inhabited ones in the Maldives. Most of these islands are stunning beauties, with clear blue oceans and white sandy beaches. 88 of the uninhabited Maldives desert islands have been developed as tourist resorts for people looking for the perfect escape to enjoy the sheer tranquility of the beautiful islands. It’s an incredible island to add to your bucket list of places to visit!

Lying just off the eastern end of the island of Timor, Jaco Island is a low-lying island with an area of 4.2 square miles and a maximum elevation of about 330 feet. Jaco Island is predominantly uninhabited as the locals consider it to be sacred land. However, tourists are allowed to visit for day trips, as well as for camping. It was made a part of the Nino Konis Santana National Park in 2007. It is an uninhabited island covered mainly by tropical dry forest, fringed by vegetation and sandy beaches. This island supports diverse populations of birds, making it to the list of Important Bird Areas.

The world’s second-largest coral atoll, Aldabra is one of the Outer Islands of Seychelles. It belongs to the Aldabra Group of Islands in the Indian Ocean. Its name was given for the atoll’s “harsh, sun-baked environment.” As there are no surface freshwater sources on Aldabra, early explorers majorly exploited the species of tortoises, turtles, and fishes, and did not inhabit the atoll. Aldabra is home to the world’s largest population of the Aldabra Giant tortoises – about 152,000 of them live here! After World War II, the exploitation of Aldabra for commercial use came to an end. Restrictions were then imposed on the number of people who could stay on the islands. As of today, the islands are predominantly isolated and difficult to access, and they have no permanent human residents.

Antipodes Island is one of the main islands of the New Zealand Outlying Islands. Listed as a UNESCO World Heritage Site, Antipodes Island is a natural reserve and entry is extremely limited to the public. The Antipodes group has also been identified as an Important Bird Area because of its significance as a breeding site for several species of seabirds. With a cold climate and harsh winds, they are uninhabitable and inhospitable volcanic islands. This island is also known for several shipwrecks and deaths. In June 1999, two people lost their lives as a result of a wreck at the Antipodes.

Part of the Republic of Kiribati, the Phoenix Islands is made up of eight atolls and two submerged coral reefs that lie in the central Pacific Ocean. The Phoenix Islands Protected Area is one of the world’s largest protected areas –covering over 157,000 square miles! It is home to about 120 species of coral and more than 500 species of fish. All of the Phoenix Islands are uninhabited, except for a few families who live on Kanton Island. There is evidence to suggest that people used to live on the islands in the past, but the hard life on these remote, isolated islands led to the extinction or migration of these settled people.

With pristine rainforests and rich marine life, Tetepare Island is known as an area with high biodiversity and preservation values. Numerous bird, mammal, reptile, and frog species have been recorded on Tetepare, including rare and endemic bird and bat species. It is the largest uninhabited island in the Southern Pacific and a part of the Solomon Islands. This island once had local residents who spoke the Tetepare language and had unique traditions. But the island was abandoned in the mid-19th century with the locals dispersing to neighboring regions of the Solomon Islands –for reasons still unknown. In 1995, landowners came together to form an association to conserve Tetepare for the benefit of all descendants and future generations.

You can also read our article on the most uninhabitable places on Earth. We also have one on some unclaimed islands from around the world. 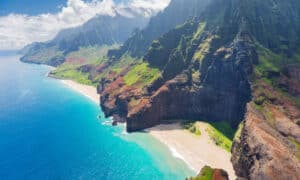