For most of us, the word “cobra” mainly brings to mind snakes like the king cobra and Indian cobra, with their large, ornately patterned hoods and deadly venom. What most people don’t know, though, is there are actually dozens of unique cobra species spanning multiple genera! Let’s take a closer look at the many different types of cobras and what makes them so unique below.

What is a Cobra?

Interestingly, the term “cobra” is somewhat loosely defined and can refer to more than 40 different species of snakes spanning more than 6 genera.

Nearly all snakes known as cobras (aside from the false water cobra) fall under the Elapidae family of snakes. However, importantly, not all elapid snakes are cobras.

As a general rule, snakes like cobras in the Elapidae family are venomous and have large, hollow, permanently erect fangs at the front of their mouths. Most species have potent neurotoxic venom, often combined with hemotoxic or cytotoxic venom. Cobras have some of the most deadly venoms of all elapid snakes.

Additionally, most elapid snakes also use a specific type of defense mechanism in which they rear up and spread a hood or enlarged flap of skin around the neck to make themselves look larger and more intimidating. This is used as a threat display to intimidate potential predators. Cobras typically have very large or pronounced hoods compared to other elapids. Notably, they are also some of the fastest and largest elapid snakes.

The vast majority of cobra snakes are part of the Naja genus within the Elapidae family. The term “Naja” is derived from “naga,” the Sanskrit word for “snake.”

The cobras within this genus are collectively known as “true” cobras, as they are the most widespread, well-known, and recognizable cobra species around the world. There are currently 38 total species of cobras within this group. They primarily live throughout Africa and Asia.

Collectively, these snakes have long and slim bodies, but they are surprisingly muscular. They are able to lift the front section of their bodies off the ground and extend their wide, flat neck hoods.

While most cobras, in general, are capable of this defense mechanism to an extent, cobras within the Naja genus have some of the largest, most pronounced neck hoods. Many Naja species can stand at 3 to 5 feet tall when rearing up, and most of them can spit their deadly neurotoxic and cytotoxic venom as far as 6 feet!

Some of the most notable species within this genus include:

This genus contains one of the most well-known cobra species on the planet: Ophiophagus hannah, better known as the king cobra. It’s actually the only species within this genus!

Although it resembles most of the aforementioned “true” cobras at a glance, the king cobra gets its own designated grouping for a few important reasons. For starters, its hood is especially large and pronounced, with a unique striped pattern extending down the length of the neck.

More interestingly, though, is that the term Ophiophagus essentially means “snake eater,” which is a nod to the king cobra’s bizarre eating habits. Unlike most other cobras, which feed primarily on small rodents, birds, and sometimes lizards, the king cobra mainly feeds on other, smaller snakes.

Though many snakes would find cannibalizing one another regularly to not be worth the trouble, the king cobra doesn’t struggle at all with taking down its unorthodox prey. It’s the longest venomous snake in the world and one of the largest cobra species. What’s more, its neurotoxic venom is extremely potent, which it uses to swiftly paralyze its prey.

The next notable group of cobras within the Elapidae family is the Aspidelaps genus. Aspidelaps contains just two species of snakes (with five subspecies between them). They are both native to southern Africa.

These snakes are collectively known as the shield-nosed cobras for their slightly upturned noses similar to that of a hognose snake. They are mostly terrestrial and semi-fossorial and primarily use their uniquely-shaped snouts for digging.

Out of all known cobra species, the shield-nosed cobras are some of the smallest. Both species average just 2 to 3 feet long. Additionally, their hoods are much smaller and not as pronounced as those of other cobras. Despite their small size, though, their neurotoxic venom is quite potent and can kill a human.

Aspidelaps consist of the following species:

The Pseudohaje genus contains two species of cobras collectively known as tree cobras or, alternatively, forest cobras. They are the most arboreal cobras of all, spending most of their time climbing the tree canopies of the dense forests they inhabit. Both species in this genus are native to central Africa.

Aside from their arboreal nature, the main traits that set the tree cobras apart from other cobra species are their comparatively larger eyes and smaller fangs. Importantly, their enlarged eyes give them better eyesight than most other cobra species, which allows them to better spot prey from the tops of trees. Their hoods are also very small and less pronounced than those of typical cobras. On average, both species range from around 7 to 9 feet long.

Pseudohaje consists of the following species:

Up next, we have the Walterinnesia genus, named for the late zoologist Walter Francis Innes Bey. There are two cobra species in this group and no subspecies. Together, they are known as the black desert cobras due to their coloration and the desert habitats in which they reside.

Both species share the same general geographic range throughout much of the Middle East. Additionally, the two species are very similar in appearance, being almost entirely black in color and ranging from around 3 to 5 feet in length.

Strangely, unlike most other cobras, black desert cobras have fairly small hoods and rarely use them as a threat display or defense mechanism. They also don’t rely primarily on their venom to take down their prey, as they are also skilled constrictors.

Finally, we come to the last notable type of cobra we’ll discuss here, the rinkhals, the sole species within the Hemachatus genus. The term “rinkhals” has Afrikaans origins and loosely translates to “ring neck,” which refers to the white ring-like pattern around the snake’s neck. Another common name for this species is the ring-necked spitting cobra.

As its name’s origins suggest, the rinkhals is native to Africa. It primarily lives in southern African countries like Zimbabwe, Mozambique, and South Africa. Interestingly, this species gives birth to live young, unlike most other cobra species which lay eggs. It’s also on the smaller end as far as cobras go, ranging from 2.5 to 3 feet long.

Despite its small size, the rinkhals has a fairly large hood. It can also spit its neurotoxic and cytotoxic venom as far as 8 feet! Fortunately, it is not particularly aggressive towards humans and mainly preys on small amphibians and rodents. 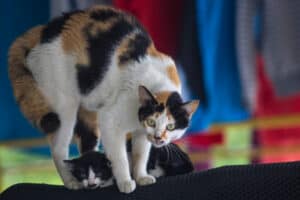