What Do Shrews Eat? 11 Foods for a Tiny Animal

Shrews are not only a semi-terrestrial species- they are also a type of animal that loves to eat. This small rodent-like creature is found throughout the world.

So, what do shrews eat? Shrews eat all types of bugs, snails, worms, and slugs.

But how much does a shrew eat, and how do they impact their local environments? The answers may surprise you, given the diminutive size of this species. Let’s learn more about what shrews eat now.

What Does a Shrew Eat?

A shrew eats virtually any type of insect, including ants, beetles, worms, moths, snails, slugs, and more. Given that this animal lives underground but comes up to the surface to feed, they have a wide variety of bugs at their disposal.

Shrews are commonly known as insectivores, meaning their primary food source comes from bugs or insects. However, shrews have also been known to eat rodents, such as baby mice or rats. While it depends on the species, this would make shrews carnivores, not solely insectivores.

While shrews may be small, their appetite is mighty- but more on how much a shrew can eat later.

Depending on the specific species of shrew, these animals will eat the following:

While bugs are the favorite meal of most shrew species, they have been known to devour mice with their very small and sharp teeth. According to the Journal of Mammalogy, shrews eat mice, rats, and other small mammals, but it may be due to their extremely territorial nature.

It should also be mentioned that shrews are not rodents, despite their appearance and other similar characteristics. While it is unnerving to picture this small and snouted creature eating a mouse, at least they aren’t the same species!

How Much Does a Shrew Eat?

A shrew eats 2-3 times its body weight in food every 24 hours. While shrews don’t weigh very much and this ultimately doesn’t amount to very much food, eating 2-3 times your bodyweight is an impressive feat.

Shrews have such an impressively fast metabolism that even going without food for a few hours could lead to their death. Even though they make their homes under the earth, shrews are often found on the surface, eating whatever they can find.

According to Science magazine, a shrew relies heavily on its sense of smell and touch to find food. They are mostly blind creatures, given that they normally live in complete darkness underground. They utilize echolocation, much like bats.

Do Shrews Have Any Predators?

Shrews do have predators, such as birds of prey, foxes, cats, and weasels.

Given their small size and relative inability to defend themselves, shrews are common prey. Coming to the surface is always a dangerous time for any shrew, especially since they can’t see above ground very well, if at all.

Some common shrew predators include:

However, there is something special about shrews that makes them unappealing to most predators once they catch them: shrews are equipped with scent glands that taste disgusting if a shrew is attacked.

According to the Journal of Mammalogy, shrews are covered in these scent glands and can emit an odor that is repulsive to carnivores and predators. Even though they may die, many shrews are left abandoned by predators once their scent glands are activated.

Shrews are also a surprisingly territorial animal. They have been known to fight other small rodents and mammals, and to the death. While shrews will also eat mice, many studies believe that shrews kill mice simply out of territorial disputes.

There may be many predators that hunt shrews, but it is important to mention that shrews are also venomous. Much like snakes, a shrew can bite and inject venom into its prey or attacker, often leading to paralysis or death depending on the size of the creature.

Shrews are capable of poisoning a bug or spider and keeping it alive to eat later, paralyzed and incapable of escaping. When you think of this tiny animal as being poisonous, it certainly makes you think twice about approaching a shrew!

Is a Shrew Dangerous to Humans?

A shrew isn’t necessarily dangerous to humans, but their bite can hurt due to their sharp teeth and venom. Yes, believe it or not, many species of shrews have venom in their body, allowing them to incapacitate their prey.

The Journal of Mammalogy cites that shrews can’t poison mammals that are larger than them, but the venom in their bite can cause extreme discomfort. If a shrew bites a mouse or bug, the chances of them killing or paralysing their food is high.

While this doesn’t mean that a shrew is dangerous to humans, caution should be used when dealing with them. A shrew can’t poison a mammal as large as a person, but it can definitely deal a sharp bite with their 32 pointy, rodent-like teeth.

What Do Shrews Eat in Winter?

Shrews eat much less food in winter, and are capable of shrinking their bodies in order to survive. This includes their entire being, and they can even shrink their internal organs, such as their brain and liver.

While shrews aren’t known to hibernate, physically shrinking their bodies in the winter allows them to survive with less food during these colder months. This can be a great blessing for a creature that could freeze should it need to come to the surface and eat.

No matter what, a shrew is an opportunistic eater, especially when food is scarce in the wintertime. They will eat any and all bugs they come across, and may eat more mammals during this season should mice be more commonly around. 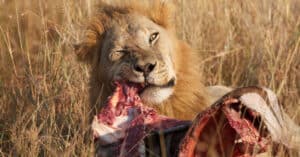