Barn owls are the most widely distributed members of the owl family, known for their stark white faces and haunting calls. 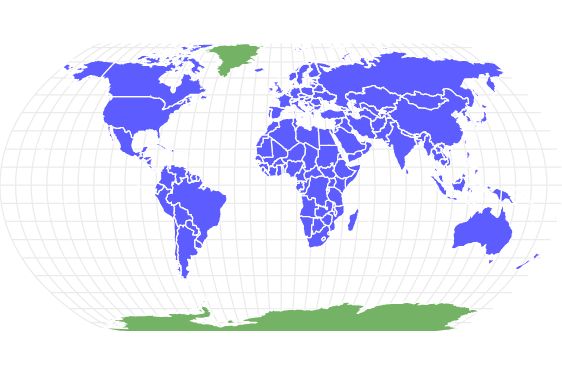 View all of our Barn Owl pictures in the gallery.

View all of the Barn Owl images!

Barn owls are the most well-known member family of owls known for their stark white faces and haunting calls.

They are extremely widespread, one of the most widespread bird species on earth. Barn owls primarily keep the rodent population in check wherever they live by preying on rats and mice. In many cultures, they are seen as harbingers of death or symbolize the afterlife.

You can check out more incredible facts about barn owls.

Because these owls are so widespread, there are over 25 subspecies that vary in size and coloration.

Based on existing fossil records, barn owls existed during the Eocene Era. There are four extinct species of barn owls which include:

There are 35 sub-species of barn owls which are distributed across North and South America, Europe, Asia, and Australia, listed below:

The barn owl is an animal that is most known for its bright white, heart-shaped face. Their heads are smooth and, unlike many other owl species, they do not have ear tufts. The owl’s eyes are large and dark. Their heart-shaped faces are framed by brown and grey feathers, as is the backside of their wings and their bodies. The wings are short, rounded, and pale beneath. Sometimes their pale white breasts are spotted. Female owls with spots are more desirable to males.

These owls are nocturnal birds that primarily hunt at night. Their facial disks help sound make its way to their ear holes, where they can better detect sounds. These owls swallow their prey whole and then regurgitate pellets after most of the animal has been digested. The size of these pellets can be up to 1.5 inches, and scientists use them to learn many facts about what the barn owl eats.

Their eyes are twice as sensitive as the human eye. This feature, as well as their large wingspan compared to their bodies, helps them silently hunt at night. They prefer to hunt in open fields.

The sounds that these owls make have been described as banshee-like. One of the most distinctive facts about the barn owl is its haunting screeches, not a hoot like most other owls.

These owls sleep in abandoned barns, which is where they get their names. They also prefer empty tree cavities and other hollow places.

The many subspecies of these owls can be found all over the world in various habitats. They are an adaptable species that can live in most environments, from desert to lush farmland.

Because these owls nest in barns and other abandoned buildings, they are comfortable living in cities, suburbs, and other places that put them in close contact with human beings.

These owls are birds of prey, and they mostly target rats and mice. Sometimes, by dissecting pellets, scientists have found the occasional frog, smaller bird species, or even fish.

Some of these owl species survive on an insect-based diet. These owls are smaller, island-dwelling species. Where they live, large food options tend to be scarce, so these owl subspecies have adapted to the environment.

Opossums, eagles, and raccoons prey on baby barn owls and barn owl eggs. Other owl species, such as the great horned owl and the eagle owl, also prey on their barn owl cousins.

These owls are a Least Concern species in terms of population decline. Their populations remain steady worldwide, but rehabilitation projects do exist in areas where barn owls are vanishing.

Male owls opt for a mid-flight display when they are ready to mate with a female. These maneuvers include “moth flight,” which is a maneuver in which male owls hover in midair in front of the female.

These owls can lay up to 2 nests per year and can breed year-round. They remain in one territory once they mate, and about 75% of all barn owls mate for life. These pair do “divorce” if they cannot produce enough young owlets together. When preparing to lay eggs, barn owls choose trees closer to the large, open fields where they enjoy hunting.

Females lay anywhere from 2 to 12 eggs, and the egg-laying takes place over multiple days. This spacing is so that the owlets do not hatch all at once. If food is abundant, the female will lay more eggs. Each egg incubates for about 30 days. Chicks leave the nest after the parents have cared for them for about 15 weeks.

Because these owls are so widespread, it is hard to get an accurate account of the population. Recent counts estimate that there are anywhere between 4 million and 10 million barn owls in the world.

This species is listed as one of Least Concern by the IUCN’s Red List. Habitat decline is the biggest threat to these owls, though their populations do remain mostly stable. The biggest way to help protect barn owls is to give them places to raise their young, such as providing nesting boxes.

Many zoos across the United States have become homes to these owls. The Cincinnati Zoo in Ohio hosts one of these owls in their Wings of the World exhibit. Many other zoos, including the Cosley Zoo in Indiana, the Pittsburgh Zoo in Pennsylvania, and the San Francisco Zoo in California. Odds are that wherever you are, there is likely a barn owl at a zoo or nature center nearby.

Around 970 of these owls are living in zoos worldwide. Many of these owls come to find their homes in zoos as a result of rescue operations. Dawn and Dusk, the resident owls at the Belfast Zoo found their permanent homes after being rescued. Another barn owl, Bubo-no-no, found a forever home at the Honolulu Zoo after being rescued as a chick by the Hawaiian Electric Company. Zoos often are vital in raising and rehabilitating owls that might not otherwise thrive in the wild.

Barn Owls are Carnivores, meaning they eat other animals.

What Kingdom do Barn Owls belong to?

What class do Barn Owls belong to?

What phylum to Barn Owls belong to?

What family do Barn Owls belong to?

What order do Barn Owls belong to?

What type of covering do Barn Owls have?

Barn Owls are covered in Feathers.

What genus do Barn Owls belong to?

In what type of habitat do Barn Owls live?

What is the main prey for Barn Owls?

What are some predators of Barn Owls?

Predators of Barn Owls include foxes, raccoons, and wild dogs.

What are some distinguishing features of Barn Owls?

How big are barn owls?

These owls are known for their screeching sounds, like that of a banshee.

Barn owls have bright, pale white faces and underbellies. They have grey and brown feathers on their backs and the backs of their wings. They have a large wingspan with respect to their body size and forms a rounded shape.

Where does a barn owl live?

Barn owls require large, open habitats in order to hunt, such as marshlands, fields, or agriculture fields. They tend to nest in trees or abandoned structures like barns and silos. Subspecies of the barn owl Tyto alba can be found on every continent except Antarctica.

Barn owls are not particularly dangerous. They are quite shy and will generally fly away when approached by humans, even if it means abandoning their nests and eggs.

Barn owls are non-migratory, meaning they stay in their environment year-round.

How many eggs does barn owl lay?

Barn owls lay up to 12 eggs in one nest. They lay eggs up to two times a year. They lay more eggs if more prey is available.

How fast does a barn owl fly?

Barn owls can fly between 10 to 20 mph when hunting for their prey.

What is barn owl’s wingspan?

When do barn owls leave the nest?

Baby barn owls stay in their nest for 50-55 days after hatching. The parents will assist their chicks until the baby owls become independent enough to hunt for themselves.

What is an interesting fact about Barn Owls?

Barn Owls are found everywhere around the world!

What is the scientific name for the Barn Owl?

The scientific name for the Barn Owl is Tyto alba.

What is the lifespan of a Barn Owl?

How do Barn Owls have babies?

What are the differences between a Barred owl and a Barn owl?

The key differences between Barred and Barn owls are appearance, size, and behavior. The main way to tell them apart is to look for the distinct white, heart-shaped face of the barn owl. But this is far from the only way to tell which is which.

What are the key differences between true owls and barn owls? 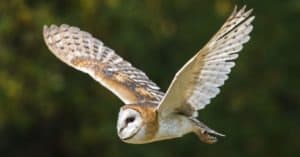