It is completely arboreal, and its green color is one of the adaptations that make life in the trees possible. 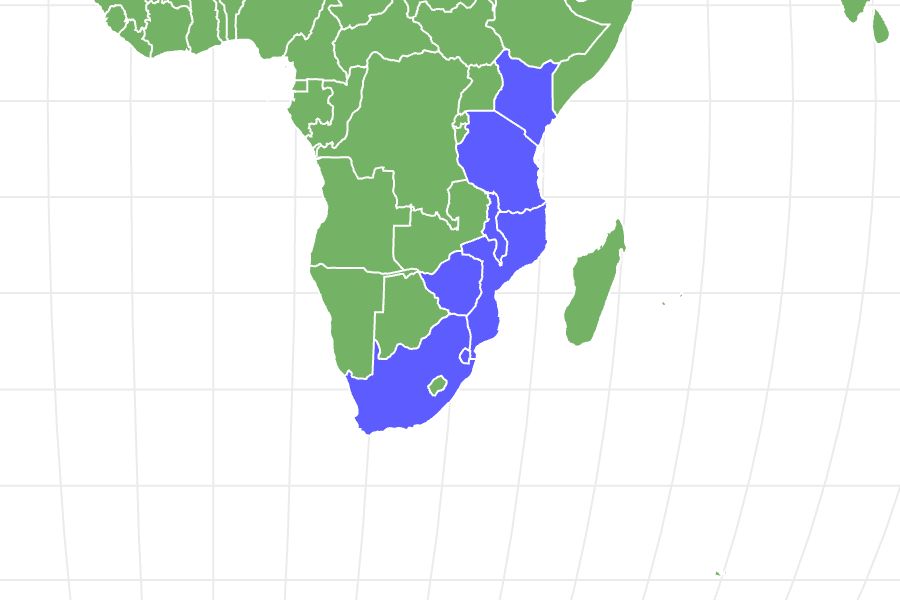 Fun Fact
It is completely arboreal, and its green color is one of the adaptations that make life in the trees possible.
Other Name(s)
Common green mamba, the white-mouthed mamba, the East African green mamba, or the green mamba
Diet
Carnivore
Lifestyle
Favorite Food
Bats, small mammals and birds, bird eggs and nestlings
Common Name
Eastern green mamba
Number Of Species
1
Nesting Location
In leaf litter in a tree cavity

View all of our Eastern Green Mamba pictures in the gallery.

View all of the Eastern Green Mamba images!

Though it’s not as venomous as other species of mamba, the eastern green mamba is still a dangerous snake if it bites you. The good news is that it is so secretive and shy that bites, including deadly ones, are uncommon. Not only that, the snake lives in the trees, so stepping on it is just as rare. Read on to learn more about this beautiful green snake.

Here are four facts about the eastern green mamba.

Where To Find Eastern Green Mambas

The eastern green mamba is found in the eastern part of South Africa, Mozambique, Malawi, Zimbabwe, Kenya, South Africa, Swaziland and Tanzania. It prefers habitats of lowlands near the coast, mountain forests up to 4900 feet above sea level, and tropical rain forests and lives in the trees found there. Its green color helps camouflage it among the leaves. Other habitats where the snake might be found are plantations that grow such produce as coconuts and mangos and the thatched roofs of human habitations.

The eastern green mamba is a large, graceful snake notable for the bright shade of green of its dorsal scales and even the greenish-yellow hue of its ventral scales. Baby eastern green mambas are a pretty shade of bluish-green and take on the leaf-green color of the adults when they’re 2.5 feet long. It has a long head and eyes of medium size that have round pupils rimmed with gold. The irises are green. The eastern green mamba belongs to the same family as the cobras, Elapidae, and is capable of flattening its neck ribs a bit to form a sort of hood. However, it will lean forward instead of rearing up like a cobra. When it opens its mouth, which is also part of the threat display, the inside is bluish or white. Though the fangs are short and don’t fold back like those of vipers, they are still capable of delivering a dangerous load of venom.

Though the venom of the eastern green mambas isn’t as potent as the venom of the other mamba species, it is still dangerous. Venom is one of the adaptations that help the snake digest its prey, and over the eons, snakes have used what is now a super-strength saliva to both quickly subdue prey and defend themselves. The venom of the eastern green mamba is full of toxins that attack both the cardiovascular system and the nervous system. A person who is envenomed by the snake experiences swelling around the area of the bite, nausea, and dizziness. As the venom attacks the nervous system the person will start to find it hard to breathe and swallow, and their heart will start to beat irregularly. Finally, they suffer convulsions and the muscles that control their breathing are paralyzed. In other words, untreated envenomation by the eastern green mamba can lead to death fairly quickly.

The eastern green mamba is said to be shy and to only bite when it is cornered. This is good news for humans, for the snake’s bite can be deadly. It lives almost exclusively in the trees of its habitat but might come to earth to bask. Biologists believe it is an ambush predator that lays in wait for prey to come within striking distance, though it will hunt. The diet of the eastern green mamba includes bats, small mammals, and birds, bird eggs, and nestlings. Humans are one of the snake’s top predators, but it’s also hunted by secretary birds, hornbills, mongooses, and genets. Other snakes have juvenile eastern green mambas as part of their diet.

During the breeding season, the males engage in ritual combat for the right to mate. The winner pins the loser’s head to the ground, but unlike the black mamba, no biting occurs. The winner will then sidle up to a female, who will raise her tail if she is interested. Both males and females can have more than one mate per season.

After mating, the female lays between four and 17 eggs in leaf litter in a tree cavity. Egg-laying usually happens in the fall. The babies hatch after an incubation period of about three months, and they are 12 to 18 inches long with working venom glands. They’ll be ready to breed themselves when they are between three and four years old and can have a lifespan of about 14 years.

How do you identify the eastern green mamba?

The eastern green mamba is a slender green snake, large in size at nearly 7 feet. It is bright green on top and has a green to greenish-yellow belly. Its eyes and pupils are round. It is possible to mistake this snake for other green snakes such as green boomslangs and green bushsnakes. Green bushsnakes are smaller in size than the eastern green mamba, and they are nonvenomous. Green boomslangs also tend to be smaller than eastern green mambas, but they have huge eyes and egg-shaped heads. Males are the ones that are confused with green mambas, for they are light green. However, their scales are edged with blue or black unlike the scales of the green mamba.

Where are eastern green mambas found?

Eastern green mambas are found in east Africa in such countries as eastern South Africa, Swaziland, Zimbabwe and Kenya.

How long are eastern green mambas?

These snakes grow between 5.9 and 6.56 feet. Females are bigger than males, one of the adaptations that evolved because of their greater reproductive investment.

The western green mamba lives in western Africa in such countries as Liberia, the Ivory Coast, Togo, Guinea, Guinea-Bissau and Sierra Leone. The largest of these snakes can be nearly 8 feet long, which is larger than the eastern green mamba. It’s also different from the eastern green mamba in that its green color turns to orange or yellow orange as it approaches the tail, and its scales are bordered in black, which gives the snake’s body a reticulated pattern.

Can an eastern green mamba kill a human?

If the snake injects a good deal of venom into the person and they do not get medical treatment quickly, the eastern green mamba can indeed kill a human.

What do Eastern green mambas eat?

Eastern green mambas eat birds, bird eggs, nestlings, bats and other small mammals they usually encounter in the trees where they live.