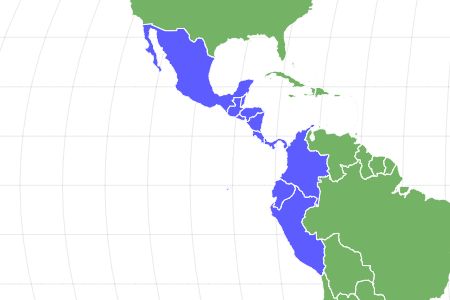 View all of our Eyelash Viper pictures in the gallery.

View all of the Eyelash Viper images!

The eyelash viper, which is known by many names, has a distinct set of scales above their eyes that look like bold eyelashes.

It comes in many different colors, making it attractive to the pet trade. It gives birth to live young, carrying along the eggs for half of the year before they are born. With a lifespan of at least 10 years, scientists have yet to determine a worldwide population, despite being of least concern.

Where to Find Eyelash Vipers

The primary home of the eyelash viper is Central and South America, though it has been found as far north as southern Mexico and as far south as the lowland areas of Peru, Ecuador, and Costa Rica. They prefer a humid and tropical climate, specifically placed in lower altitudes.

With dense foliage, the viper can conceal itself within its natural habitat to protect it from being seen by predators. No matter what location the eyelash viper is found, they need to have a nearby water source to stay hydrated. Some studies show that this snake can be found in shaded ravines as well.

The eyelash viper is arboreal, which means it likes to live in trees. Though it doesn’t typically migrate, it will go to the same spots each year that birds migrate to.

The eyelash viper has many other names, including the eyelash pit viper, eyelash palm viper, eyelash snake, eyelash lancehead, eyelash mountain viper, and the horned palm viper. The scientific name of this snake is Bothriechis schlegelii, which is meant to honor a German ornithologist and herpetologist named Hermann Schlegel.

Its class is Reptilia, and it is part of the Viperidae family.

While there is not a specific number of eyelash vipers noted, their population is steady. The IUCN Red List considers them to be Least Concern, though they could progressively lose access to their natural habitat as deforestation and urbanization progress.

How To Identify Eyelash Vipers: Appearance and Description

One of the big reasons that the snake is so popular is the beautiful range of colors in which it is found. They are typically found in green, brown, yellow, or red, though they can also be found in more bold colors like pink or even blue. They have subtle and sparse speckles of brown or black dots along their entire body.

It would be remiss to not mention the main reason they are called the eyelash viper. With superciliary scales above their eyes, their camouflage looks much like separate pieces of grass and foliage. Plus, like all vipers, they have large needle-like fangs that fold onto the roof of their mouth when they are not going after prey. Between the eyes and the nostrils, they have pits that sense the heat of possible meals as they go by.

How to identify an Eyelash Viper:

Eyelash Viper Venom: How Dangerous Are They?

Like all vipers, the snake poses a significant threat to anyone nearby. They are highly venomous, and they are known for their incredibly fast strike. They aren’t typically aggressive, as they prefer to use their bite as a way to catch their prey instead. Their venom is strong enough to kill a human in some circumstances.

If you are bitten and exposed to the eyelash viper’s venom, you need to treat it the same way that you would for any pit viper. You may not even know that you’ve been bitten right away because they don’t always leave a mark. Trouble breathing, pain, bruising, changes in heart rate, and numbness are all common symptoms. You may even have a minty, rubbery, or metallic taste in the mouth. The actual risk of death and severe symptoms depends on how much venom is released and your current health risks. If you don’t experience symptoms within 8 hours, that doesn’t mean you’re okay, and you’ll need to watch out for the next two weeks. Luckily, about 25% to 50% of bites are dry and nothing happens. Seek out medical attention if you’re unsure.

Even if the pit viper is dead, it can still strike and release venom for up to 90 minutes, so be careful around the head.

Typically, there is no outright aggression of the snake towards humans. In fact, the vibrant colors of this snake have led it to become a highly desired pet amongst consumers. The venom of the eyelash viper is incredibly dangerous, though there are some cases of a “dry bite,” which means that the snake doesn’t get the chance to release venom.

What is an eyelash viper?

An eyelash viper is a highly venomous snake that can be found in many beautiful colors, including pink, blue, yellow, red, brown, and green. This type of pit viper primarily lives in Central and South America, though it is sometimes kept as a pet. Its most notable feature is the bristly brow that looks like a pair of eyelashes, meant to help them conceal themselves while hunting.

Why is it called an eyelash viper?

Bristly scales above the eyes have earned this snake the name “eyelash viper.” Local myths say that this snake can wink at its victim after it strikes, but there’s no scientific evidence to back up this claim.

How venomous is an eyelash viper?

There are few snakes that are as venomous as the eyelash viper in Costa Rica.

In some cases, a bite is fatal. With the hemotoxic and neurotoxic properties of the venom, it can cause severe damage to the cardiovascular system and the central nervous system.

While the eyelash viper can be a pet, be cautious – they are extremely poisonous.

Where do eyelash vipers live?

The primary locations of this snake are Central America and South America.

What does an eyelash viper eat?

The typical diet of the eyelash viper consists of small rodents, frogs, lizards, and small birds.

How do eyelash vipers hunt?

The eyelash viper is an ambush hunter, waiting for their prey to come by as they lay in wait. Since migratory birds tend to be on their preferred menu, these reptiles will sometimes go to the same area every spring as they expect their prey to return.