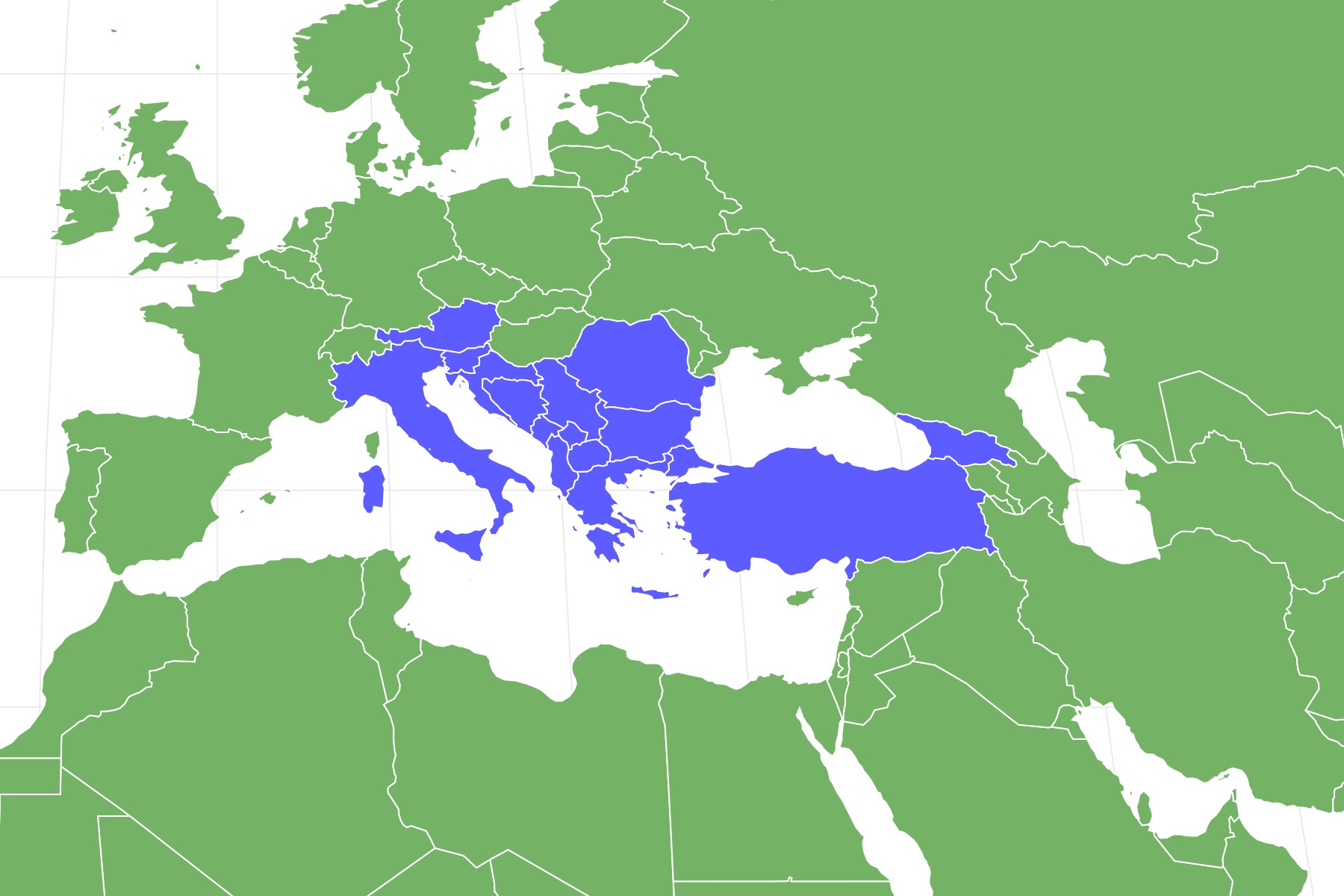 Prey
Rodents, rabbits, birds
Fun Fact
The fangs of a nose-horned viper can be as long as half an inch
Litter Size
1-20 snakelets
Diet
Carnivore
Common Name
Nose-horned viper

View all of our Nose-horned viper pictures in the gallery.

View all of the Nose-horned viper images!

The most noticeable thing about this snake is the fleshy horn atop its snout. This viper grows to a size of two and a half to a little over three feet long. It lives on the outskirts of forests, shrublands, and on rocky hillsides in areas of Europe. This snake has a carnivorous diet of small mammals and birds. Though this viper has potent venom, it’s not an aggressive reptile.

Where to Find a Nose-Horned Viper

The nose-horned viper makes its home in a few different types of habitats including the edges of forests, shrublands, and rocky hillsides of Europe. They inhabit a temperate climate and go into brumation with the arrival of the cold weather. These reptiles are especially active from April to May during their mating season.

They are in the Viperidae family and in the class Reptilia.

The IUCN Red List of Threatened Species categorizes the nose-horned viper as Least Concern. Its population is not known, but its numbers are described as decreasing.

How to Identify a Nose-Horned Viper: Appearance and Description

Male and female nose-horned vipers are different in appearance. Males have a background of gray or brown scales with a pattern of dark brown or black zigzags running down its back. Males also have a black V-shaped marking on their heads along with a black stripe next to each eye. Female nose-horned vipers have a similar pattern, but their colors are not as distinct. Plus, females don’t have a V-shaped marking on their heads.

Both males and females have a horn-like structure on the end of their snout. Their eyes are copper-colored with a black, vertical pupil. This snake’s belly is cream or yellow scattered with dark spots.

The size of the nose-horned viper ranges from two feet to a little over three feet in length. The fangs of this viper can measure up to half an inch in length. Its tongue is black.

How to identify a nose-horned viper:

Nose-Horned Viper Venom: How Dangerous Are They?

Nose-horned vipers have potent venom. However, they are not aggressive snakes. They will try to move away from a threat if possible. A bite from this snake usually occurs by accident. For instance, a person may get a bite after accidentally stepping on this snake while walking in a grassy area.

If someone does get a bite from a nose-horned viper it’s important to keep the individual calm and still. Call for emergency medical services right away. Help the person to remove jewelry or watches that may become an issue if swelling occurs. As an example, if the person was bitten in the arm, take off the person’s wristwatch. Keep the bite area lower than the level of the person’s heart. Stop all unnecessary movements until medical personnel arrives. Avoid putting ice on the bite area and don’t try to cut into it in an effort to remove the venom.

Fortunately, there have been very few deaths as a result of the bite of a nose-horned viper. But the risk of death goes up if the person does not seek treatment for this viper’s bite right away.

Nose-horned vipers are not aggressive. They are timid but will bite if they feel cornered or at risk of injury. If a person sees or encounters this snake while walking in a rocky area or grassland, it’s best to move away from it.

As a note, nose-horned vipers have different reactions to threats. One viper may freeze when it sees a person or predator approaching. Another viper may try to escape to a tree or pile of brush. In short, the first self-protective reaction of this viper is not always a bite.

View all 38 animals that start with N

Yes. These vipers have a potent venom that is deadly to their prey and can be dangerous to humans.

How do nose-horned vipers hunt?

Nose-horned vipers travel through their shrubland or rocky habitat trying to pick up the scent of their prey. Once they detect the chemical scent of prey, they wait for it to appear. When it does, the viper gives it a venomous bite. The dead prey is swallowed whole by this snake.

Vipers have a reputation for being lethargic. Unlike other types of snakes, vipers usually wait for prey to come into a particular area instead of actively seeking them out.

No, though the horn on their snout and their vertical pupils make them appear threatening, these snakes are not aggressive.

Where do nose-horned vipers live?

Their habitat is shrublands, the edges of forests, and rocky hillsides.

What do nose-horned vipers eat?

They eat a diet of small mammals such as rats, mice, and rabbits. Birds are also a part of this viper’s diet. These snakes don’t eat every day. Some of them may eat once every few days depending on the size of their last meal.

How venomous is the nose-horned viper?

Their venom is very potent. It quickly kills its prey of small mammals.

How many types of nose-horned vipers are there?

Can a nose-horned viper kill a human?

Though rare, deaths have occurred as a result of this viper’s bite. It’s important to seek medical treatment right away after getting a bite from this venomous snake.