They can run at a speed of 15mph 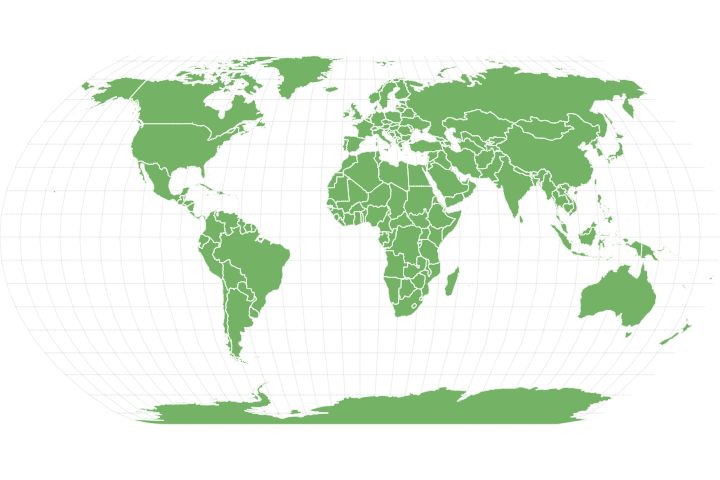 View all of our Polecat pictures in the gallery.

View all of the Polecat images!

Polecats are expert hunters that capture and eat rodents, snakes, frogs, and birds.

They are very similar in appearance to ferrets. They can reach a speed of 15mph. Species of this mammal include the American, European, marbled, steppe, and striped polecats. These animals live in Africa, Asia, North America, and Europe. The lifespan of a polecat is six to 14 years.

Mustela putorius is the scientific name of a European polecat. The Latin word Mustela means weasel and the word putorius translates to stench. Stench or stink refers to the powerful musk it can release to mark its territory or as a defense against a threat. Its family is Mustelidae and class Mammalia.

The European species has black, brown, or gray fur with white or tan on its face and belly. It has a dark bar of fur over its eyes that makes it look like it’s wearing a mask. It has a short, thick tail covered with black fur.

The American species has four black feet and a combination of light and dark brown fur on its body and tail. It has two black patches of fur over its eyes along with white-tipped ears.

The desert-dwelling marbled species is notably different in appearance from other species. It has cream or yellowish fur with brown spots on its back and tail. The front section of its body has black fur along with a bright white bar of fur on its face just above its black mask. Its rounded ears are white.

The striped species lives up to its name with a coat of black fur featuring four bright white stripes running from its head to its tail. Not surprisingly, it’s easy to mistake this animal for a skunk.

A steppe polecat has a white face along with brownish-black fur on its back and tail.

This animal’s body measures at least 14 inches long. The longest its body can be is 20 inches. Its tail can add another eight inches of length. These animals weigh from one and a half to three pounds. If you picture a bowling pin divided into ten equal sections, a 14-inch-long polecat is equal to nine-tenths of that bowling pin. If you lifted a three-pound polecat (not recommended) you’d be lifting an animal half the weight of an average brick.

They are nocturnal and have an excellent vision they use to hunt for rodents and other prey in the dark. They develop thicker fur in the winter months, then shed it taking on a lighter coat in the spring and summer.

These are solitary mammals except during mating season. If they do temporarily form a small group, it’s called a chine. This animal is known to aggressively protect its territory. Two males are likely to fight violently scratching and biting each other if one enters the territory of another. This is especially common during the breeding season.

One of the biggest differences concerns where they are found. Skunks live in North America whereas striped polecats are found in Africa. Also, the striped species weigh up to three pounds while some species of skunk can be 18 pounds! In addition, the average lifespan of a skunk is one year, and the average lifespan of the striped polecat is estimated at five years. Both types of animals usually have a longer lifespan when they live in captivity in a zoo or other protected areas. It makes sense because they don’t have to be concerned about finding food, shelter, or facing predators!

Another difference between them relates to diet. Skunks are omnivores eating plants, insects, and small animals while striped polecats are strictly carnivores eating rodents, reptiles, amphibians, and birds.

A polecat and a weasel are extremely similar in the way they look and behave. Both of these animals have slender bodies, rounded ears, and short legs. They belong to the same family and have a carnivorous diet. Also, they both find shelter in burrows abandoned by other animals. So, how do you tell them apart? Good question!

One difference between these two animals is a weasel is shorter in length growing to just eight and a half inches as an adult. In addition, an adult weasel weighs less than one pound while a polecat can weigh three pounds.

In terms of their coat of fur, a polecat has a combination of black, gray, brown, and white hair. Alternatively, a weasel has dark brown fur on its back with a cream-colored underside. Plus, a weasel doesn’t have a dark mask of fur on its face.

These animals live in Europe, Asia, Africa, and North America.

The striped species live in the eastern, southern, and western parts of Africa.

The marbled species has a range extending from the southeastern part of Europe to the middle east into China.

American polecats live in North America specifically in Alberta Canada extending down to New Mexico and Texas into northern Mexico.

Some of these animals live in a grassland or savanna habitat like the American polecat while species such as the European polecat live in grasslands, wetlands, and forests.

The steppe species lives in a shrubland habitat across Asia specifically in Mongolia, Russia, and Kazakhstan.

Most of these mammals live in a dry, temperate climate. As the cold weather approaches in the fall, they shed their light coat to take on a darker, thicker one to withstand the colder temperatures.

The population of the European species is unknown. All species of polecat with the exception of the marbled variety are considered least concern according to the IUCN Redlist of endangered species. The marbled polecat is reported as vulnerable.

The European, American, marbled, and steppe polecats all have a decreasing population. The striped polecat’s population is stable.

These creatures are carnivores. Most species are nocturnal searching for their food at night.

What do polecats eat?

They hunt for rodents, lizards, frogs, and birds. They also steal eggs from the nests of birds or snakes.

Adults have very few natural predators but were once widely hunted by humans for their fur. Newborns or juveniles are more at risk than adults of being attacked by foxes or wild dogs. However, since a mother stays with her young until they are able to live independently, a predator is risking injury from a very protective mama!

The marbled polecat is listed as Vulnerable with a decreasing population as a result of losing its desert habitat. There are some protected areas of land where marbled polecats can be found.

These mammals breed in the wintertime. They are sexually mature at one year old. Males are non-monogamous competing for females throughout a single mating season. Once a male chooses a female, he grabs her by the neck, dragging her into his territory. These small mammals have a gestation period of 42 days. This is similar to weasels with a 35 day gestation period. They give live birth to three to seven babies in one litter. Some females can have as many as ten babies.

The babies are called kits and weigh just a few ounces at birth. They are born blind with a light layer of fur. This animal’s eyes don’t open until it is one month old. They nurse from their mother, and she feeds them until they are weaned at one month. The kits live with their mother in the den learning how to hunt and survive until they are able to live independently at three months old.

The lifespan of this mammal is six to 14 years.

Are polecats carnivores, herbivores, or omnivores?

What is a polecat?

It is a small mammal similar in appearance to a ferret. It’s in the Mustelidae family and has black, gray, brown, and white fur. It’s notable for its mask of dark fur across its tiny black eyes.

This mammal is known for its slender body that allows it to easily slip into the entrance of an underground burrow in pursuit of prey or to take shelter from a threat. They are nocturnal carnivores that will aggressively defend their territory.

Is a polecat and a skunk the same thing?

Is a polecat a ferret?

While they belong to the same family, there are some physical differences between them.

What is a mink hybrid?

A mink hybrid is what results from breeding a European polecat with a European mink. Not surprisingly, this hybrid has many qualities of both its parents. It’s a good swimmer like its mink parent and it can burrow expertly into the ground like its polecat parent.

The mink hybrid came about in the wild when the European polecat began to venture into the habitats of the European mink. As a note, the creation of hybrids is considered rare when it happens in the wild. Generally, animals remain with their own species when it comes to breeding.

This animal has thick dark fur, short legs, a short tail, and rounded ears. It is a fast, slender-bodied animal with sharp teeth and small dark eyes that are always alert to its surroundings.