They can carry items with their tail.

Click through all of our Potoroo images in the gallery. 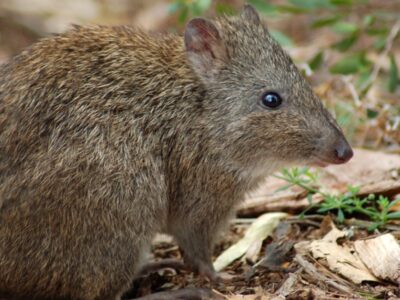 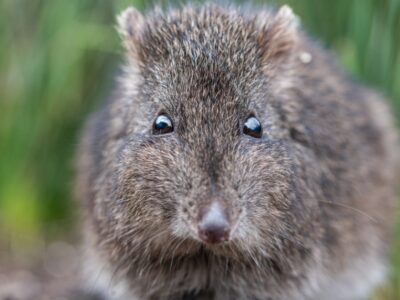 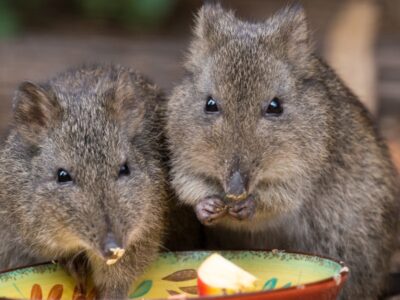 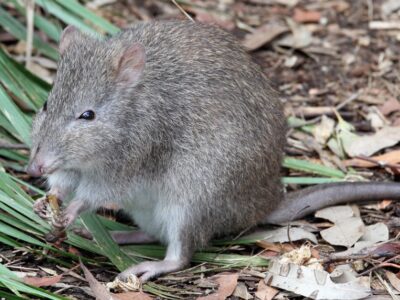 View all of the Potoroo images!

“A potoroo can carry a gathering of sticks, grass, and other material with its tail.”

This animal is considered to be a rat-kangaroo. It hops on its back feet like a kangaroo but looks like a rat. Living in various areas of Australia, these animals make their homes in the underbrush on forest floors. The diet of this marsupial includes both vegetation and insects.

Potorous tridactylus is the scientific name for a long-nosed potoroo. The word Potorous refers to the genus of this animal and the Latin word tridactylus means three-toed.

The four species of potoroo are:

This animal has dark brown or gray fur on its back and head as well as white hair on its belly. They have small ears, a long prehensile tail, and sharp claws. They can be 12 to 16 inches long and weigh two to four pounds. A 12-inch potoroo is equal in length to four-fifths of a bowling pin. If you were to pick up one that weighs four pounds, you would be holding an animal that is four-fifths the total weight of a chihuahua. The long-footed potoroo is the largest of all the species. It can reach 16 inches long and weigh just over five pounds.

Their fur color allows them to blend in with their wooded habitat. When a predator approaches this small marsupial it freezes then runs for cover in the thick brush at the first opportunity.

They are solitary marsupials except when the breeding season takes place. These small kangaroo rats are shy and come out at night to look for food.

Potoroos and bandicoots (scientific name Perameles nasuta) look very much alike. Each one is a marsupial, and both are from Australia. They have pointed noses, small ears, and tiny black eyes. So, what makes them different? A few things differentiate these two animals.

A bandicoot is larger in size than a potoroo. A greater bilby (also known as the greater rabbit-eared bandicoot) can measure 33.5 inches in length and weigh 5.5 pounds! Though their fur is about the same color, the fur of a Gilbert’s potoroo is soft while a bandicoot’s fur has a coarse texture. A bandicoot has a shorter tail than a potoroo, as a potoroo’s tail can be equal in length to its body.

If you were to check out the movements of a potoroo, you would find that it hops on its back feet like a kangaroo. On the other hand, the bandicoot is known for walking on all fours the majority of the time.

One of the most interesting species of this marsupial is called Gilbert’s potoroo. This animal gets its name from naturalist John Gilbert, who observed this Australian marsupial back in 1840. It is considered to be rare because there were so few sightings it was once thought to be an extinct species.

But, in the mid-1990s, a small population of Gilbert’s potoroos was found in western Australia. Scientists estimate the total population of this animal at less than 100. They live on a diet consisting mainly of fungi.

Gilbert’s potoroo is categorized as Critically Endangered, and there are a couple of reasons for this conservation status. One, their forest habitat in Australia is prone to wildfires, so they can easily lose their nesting areas. Also, these small animals are vulnerable to attacks from feral cats and foxes.

The continent of Australia is the home of the rat-kangaroo. They are found in southern Queensland, the eastern part of New South Wales, northeastern Victoria, and Tasmania. They live in a warm climate in thick underbrush or under bushes within wet forests.

One of the adaptations of this animal is it has an excellent sense of smell. It uses this sense to look for food at night. If you were to visit a rat-kangaroo at a zoo, you’d likely see it kept near other nocturnal animals.

Another one of its adaptations is its sharp claws. They are perfect for digging to find insects in the soft dirt of a forest. Their long, slender nose helps it to grab those bugs!

These marsupials are omnivores. They use their specially designed claws to dig up roots, grass, and insects.

This small animal’s only defense is its speed. It may be able to escape a predator by running into the underbrush to hide.

Three of the four species are low in number and at risk of disappearing. The long-nosed potoroo is categorized as Near Threatened. A Gilbert’s Potoroo is Critically Endangered. The long-footed potoroo is considered Vulnerable.

The populations of these three species are at risk because they are preyed upon by red foxes, feral cats, and other larger animals. Their habitats are also threatened by wildfires.

Unfortunately, the broad-faced potoroo species is categorized as Extinct.

Potoroos breed throughout the year. They reach sexual maturity at 12 months old. This marsupial is monogamous. The gestation period is 38 days, and this animal gives live birth to one baby. Though they only have one baby at a time, females have a total of two babies per year.

A newborn weighs less than one ounce and is about one centimeter long. It has no hair, and its eyes are closed. Just minutes after a baby is born, it moves into its mom’s pouch to nurse. The baby, a joey, lives in the pouch for about four months. A joey continues to nurse until it’s weaned at around 170 days old. That is about the time they can live independently.

The lifespan of this marsupial is five to seven years. The oldest on record, a long-nosed potoroo, is nine years old and lives at the Peter Murrell Conservation Area in Tasmania.

All three species have a decreasing population.

View all 77 animals that start with P

What is a potoroo?

It’s a small marsupial with a dark brown or gray coat featuring a splash of white. They have a prehensile tail they can use to carry items. There are three species living in Australia. These animals eat a diet of both plant life and insects.

One of their most notable adaptations is their sense of smell. They are nocturnal and use their long nose to find food in the dark.

A potoroo baby called a joey is carried in its mother’s pouch until it’s at least four months old.

Is a potoroo a carnivore, herbivore or omnivore?

Is a potoroo native to Australia?

Yes. They are from various parts of Australia and Tasmania.

How many types of potoroo are there?

There are three living species and one species that are considered extinct.

How do you pronounce potoroo?

When you pronounce this animal’s name, it should sound like you’re saying potter-roo.

What kind of fungi does a long-footed potoroo eat?

They eat hypogeous fungi. This is fungi that live underground. When they dig for these fungi, they continually turn over leaves and sticks, mixing them into the dirt. The fewer leaves and debris on the surface of a forest floor, the less material there is to burn if a wildfire starts. So, this marsupial’s eating habits are very important to the environment.

What eats a long-nosed potoroo?

How many long-footed potoroo are left in the world?

The population of this animal is approximately 75,000.