While flying high above this owl can hear a mouse moving in the tall grass of field! Click through all of our Golden Masked Owl images in the gallery. 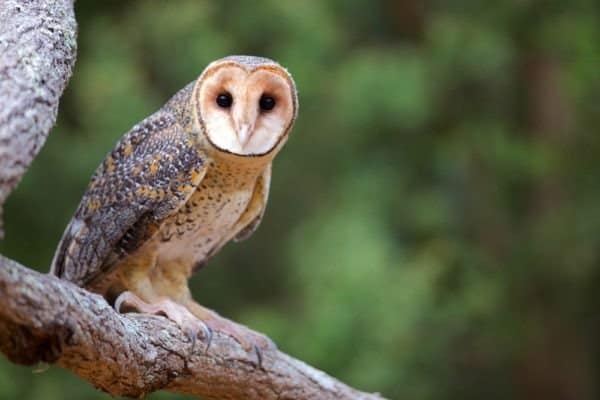 View all of the Golden Masked Owl images!

The golden masked owl is known for its whitish/yellow heart-shaped face and large dark eyes. This owl is a carnivore eating small rodents, birds, insects, rabbits, and sometimes other owls. The feathers on its wings are designed for moving silently through the air. These birds live in the tropical climate of the island New Britain, Papua New Guinea.

• This owl lives an average of 4 years in the wild
• It has 2 to 3 eggs per clutch
• This owl doesn’t hoot, it screeches
• It is a solitary bird
• It starts hunting for prey at dusk

This owl’s scientific name is Tyto aurantia. The word Tyto is Greek meaning owl and the word aurantia is Latin for orange or tawny. This refers to the orangish feathers of the golden masked owl.

This owl has orangish/brown feathers on its back and on the top of its head. Its face is heart-shaped with yellow and white feathers. The bill of this owl is flat, it has long legs and powerful talons. There are white feathers running down its chest. The two dark eyes on its heart-shaped face are constantly searching its surroundings.

This owl has no ear tufts on its head like other owls such as the Great Horned owl. A golden masked owl has ears hidden on the sides of its head. One ear is higher on its head than the other. Its left ear is able to hear sounds occurring on the ground below it while its right ear hears sounds in the air. This makes it easy to keep track of the sounds happening all around!

The coloration of a golden masked owl’s feathers blends in with the branches in its forest habitat. This is one of its main defenses against predators. Plus, the design of the feathers on its wings allows it to fly silently. Its wings have serrated edges or edges that look like the teeth of a comb. This design breaks up the air flowing over its wings and creates silent flight. As a bonus, this little owl can fly at speeds up to 20mph!

Normally, the New Britain barn owl is a solitary animal, but it sometimes pairs with another owl. During breeding season, owls may gather in a group of seven or more. This group is called a parliament. They are shy creatures that like to stay hidden in their habitat.

This owl lives on the island of New Britain, Papua New Guinea. This is an island near the continent of Australia. These owls live in a tropical climate in lowland and coniferous forests. This owl lives near the equator and doesn’t migrate.

What do golden masked owls eat? This bird is a carnivore. Its diet mostly consists of rodents. But it also eats birds, insects, rabbits, amphibians, bandicoots and smaller owls. This owl may eat as many as four small rodents per night.

Like most owls, the golden masked owl has excellent hearing. It can hear the rustle of a small rodent in a field or on the forest floor. Its wings are silent when it flies allowing it to sneak up on its prey to capture it.

Eagles, hawks, and other owls are all predators of these owls. Many of these predators are bigger and stronger than this owl making it vulnerable to attacks.

Loss of habitat due to deforestation is another threat to this owl. These owls make their nests in hollow trees.

The conservation status of this owl is: Vulnerable. Its population is thought to be decreasing. This is unfortunate because the golden masked owl plays an important part in the ecosystem. It help to control the rodent population and serves as food for bigger birds.

The breeding season of this owl lasts throughout the year. These owls stay with the same mate year after year. In other words, they are monogamous. The pair make a nest on soft mulch inside a hollow tree. Making a nest in a hollow tree helps to provide protection for the young. The female lays 2 to 3 eggs and sits on them while the male goes out to hunt for food to feed the female. The gestation period is 32 days.

Baby owls are called owlets or nestlings. Owlets weigh a little less than one ounce. They are born blind and without feathers, but quickly begin to grow a fine, pure white layer of down. Their eyes open at around 10 days old. As they grow, their feathers start to take on the orange/tawny, white and yellow coloration of adult golden masked owls. Their mother brings them small rodents and other prey that she breaks in pieces for her owlets to swallow. After these owlets have all of their feathers, they continue to be fed by their mother and father owl for about a month longer. Then, they are pushed out of the nest to live independently. They are with their parents about 80 days total.

These owls have an average lifespan of 4 years. They are vulnerable to Psittacosis, a common respiratory illness.

There are an estimated 2,500 to 9,999 individual golden masked owls in Papua New Guinea. These owls stay in hiding making it challenging to determine an exact population number. Their conservation status is Vulnerable, and this owl’s population is thought to be decreasing.

Golden Masked Owls are Carnivores, meaning they eat other animals.

What Kingdom do Golden Masked Owls belong to?

What phylum do Golden Masked Owls belong to?

What class do Golden Masked Owls belong to?

What family do Golden Masked Owls belong to?

What order do Golden Masked Owls belong to?

What type of covering do Golden Masked Owls have?

What type of covering do Golden Masked Owls have?

Where do Golden Masked Owls live?

In what type of habitat do Golden Masked Owls live?

What is the scientific name for the Golden Masked Owl?

The scientific name for the Golden Masked Owl is Tyto aurantia.

What is the lifespan of a Golden Masked Owl?

What is a baby Golden Masked Owl called?

A baby Golden Masked Owl is called an owlet or nestling.

What is the biggest threat to the Golden Masked Owl?

The biggest threat to Golden Masked Owls is habitat loss.

What is another name for the Golden Masked Owl?

How many Golden Masked Owls are left in the world?

How many babies do Golden Masked Owls have?

The average number of babies a Golden Masked Owl has is 2 to 3.

What is an interesting fact about Golden Masked Owls?

While flying high above, the Golden Masked Owl can hear a mouse moving in the tall grass of a field!

How fast is a Golden Masked Owl?

A Golden Masked Owl can travel at speeds of up to 20 miles per hour.