They prey on spiders to feed their larvae or they parasitize other spider wasps.

Click through all of our Spider Wasp images in the gallery. 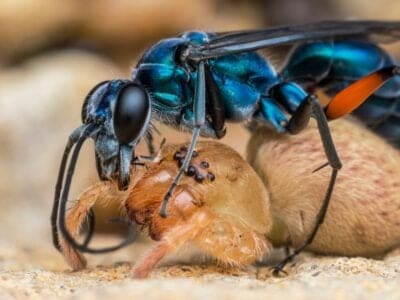 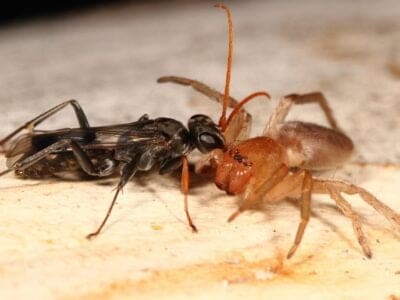 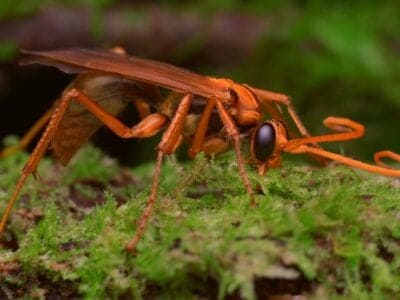 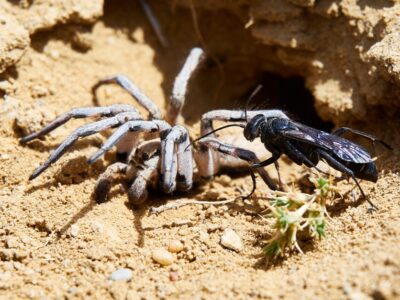 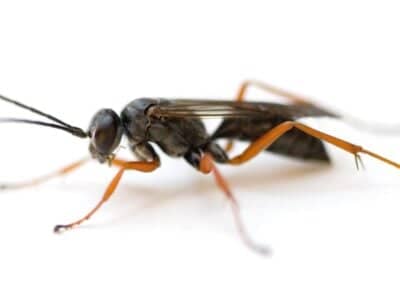 View all of the Spider Wasp images!

The spider wasp is a family of spider-hunting parasitoid insects, so-named because the young larvae live on and exploit spiders for food.

Unlike true parasites, however, they always end up killing the host in a particularly grizzly manner. Most species of spider wasps are completely solitary (with the exception of a few group-nesting species). While their sting is incredibly painful, the spider wasp does not usually attack people unless out of self-defense, because they don’t have a colony to defend in the manner of bees or other wasps. As a result, they are rarely anything more than a small nuisance to people.

Appearance: How to Identify Spider Wasps

The wasp is characterized by a slender body, normally black or blue in color, with cloudy or yellow wings and long, spiny legs. Some have yellow bands or orange or red markings to warn away potential predators. The average species in the pompilid family measures between half an inch and a full inch long. The largest members of the family, such as the tarantula hawks, are 2 inches long; they are also the largest wasps in the world. They can be difficult to distinguish from other types of wasps, but the periodic flicking of their wings may aid in identification.

Habitat: Where to Find Spider Wasps

These wasps are found in many different habitats all over the world, from South Africa to North America, usually hovering near flowers upon which they feed. Their nests are established in loose soil, rocks, or rotted wood.

Diet: What Do Spider Wasps Eat?

These wasps are omnivorous spider-hunting insects; it feeds upon animals as a larva and then switches to nectar as an adult. Utilizing a very powerful neurotoxin, the wasp stings its prey to immobilize or kill it. The stinging strategy varies quite a bit by species. Some spider wasps go for a quick kill shot anywhere on the body, though most try to take the spider alive.

The genus of Cryptocheilus will target its prey with precision first between the fangs and then near the abdomen. Once it’s been successfully stung, the female wasp will fly or drag the prey back to the nest (sometimes even clipping the legs first), where she deposits a single egg or multiple eggs on the body. The newly hatched larvae then consume the prey, even if it’s still alive. This type of behavior was an inspiration for Ridley Scott’s “Alien” movie.

What eats the spider wasp?

Depending on where it lives, this wasp is preyed upon by numerous mammals, birds, reptiles, and amphibians. However, the stinger offers a natural defense against potential predators. Many species also have a very bad taste to convince a predator that it’s not worth eating. Other harmless insects will actually mimic the appearance of the spider wasp in the hopes that it will fool their predators.

What does the spider wasp eat?

Despite the rather suggestive name, the adult spider wasps are not carnivorous at all. In fact, they are actually nectar-feeding insects. They rely exclusively on flowers for their sustenance. Only the larvae are able to feed on spiders. The adult wasp will only seek out and kill certain types of spiders for their larvae, depending on what’s available in the area.

The prey needs to be large enough to sustain the larva until adulthood. Some of their victims include the large huntsman spider in Sydney, the wolf spider in the UK, and tarantulas in North America and elsewhere around the world. Some species have even evolved the ability to steal spiders from each other, thus minimizing the amount of work they need to do. If the spider is brought back alive, then the larva will usually eat in a strategic manner to keep the prey fresh and alive for as long as possible. That means saving the internal organs for last.

Prevention: How to Get Rid of Spider Wasps

The good news is these wasps do not nest in colonies. If you find one in your home, it is certainly not a sign of any large-scale infestation, and you can simply deal with them on an individual basis. A fly swatter, rolled up newspaper, spray, or the water from a garden hose will normally suffice to drive away the wasp. Placing traps around your home may also work, but pesticide use is generally not recommended because it can cause more problems than it solves. If a spider wasp does invade your home, then it may be a sign of water damage or rotted wood, which you should correct immediately.

View all 127 animals that start with S

What is a spider wasp?

The spider wasp is a type of spider-hunting parasitoid wasp found all over the world, from South Africa to North America and from Sydney to the UK. The adult actually feeds on nectar, while the larva feeds on spiders brought back by the mother, usually still alive, to sustain itself until it reaches adulthood. Most species are characterized by black bodies with yellow, orange, or red markings.

Yes, spider wasps do sting other animals out of self-defense when they feel threatened, but they are not very aggressive, and mostly they would prefer to fly away and hide. Males generally do not have the ability to sting.

The sting of the spider wasp normally just causes pain and swelling, but some people may have a more extreme allergic reaction to its sting. Symptoms of an allergic reaction can include severe swelling, itching throughout the body, and breathing difficulties.

Death from a wasp sting is exceptionally rare, even among those who have an allergic reaction. Nevertheless, if you’re experiencing respiratory difficulties or other lingering symptoms, then you should seek immediate medical attention.

Where does the spider wasp live?

The spider wasp is found almost anywhere around the world with a sufficient amount of nectar and spiders.

Can a tarantula hawk wasp kill you?

The tarantula hawks have one of the most painful stings in the entire insect class, but the intensity subsides after only a few minutes. Only an allergic reaction is capable of causing death.

How many legs do spider wasps have?

Like all insects, the spider wasp has six legs.

How do you identify spider wasps?

Spider wasps can be difficult to distinguish from other types of wasps, but you should look out for the long, spiny legs, the black colored body, and the twitchy wings. Some also have yellow, orange, or red markings around the body that serve as a warning signal. They spend much of their time hovering near flowers or hunting spiders on the ground. Almost none of them live in colonies or groups.

How do you get rid of spider wasps?

The best way to get rid of spider wasps is with some kind of swatter or spray. Pesticide use is generally not recommended.