Click through all of our Steller’s Sea Cow images in the gallery. 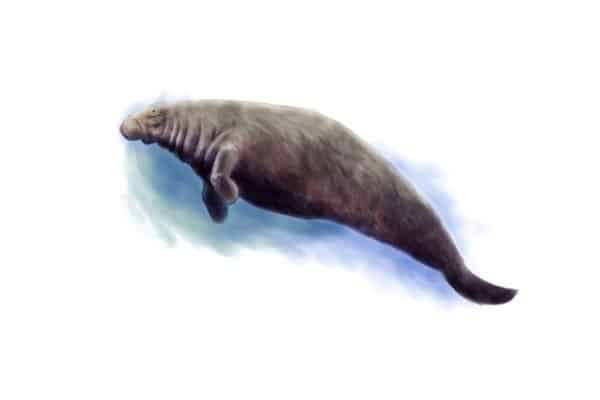 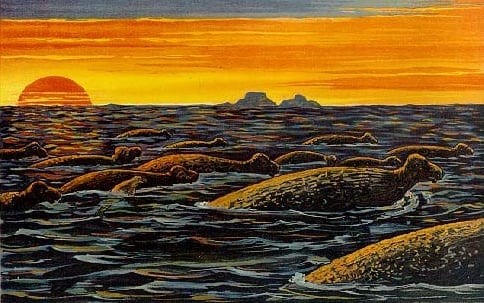 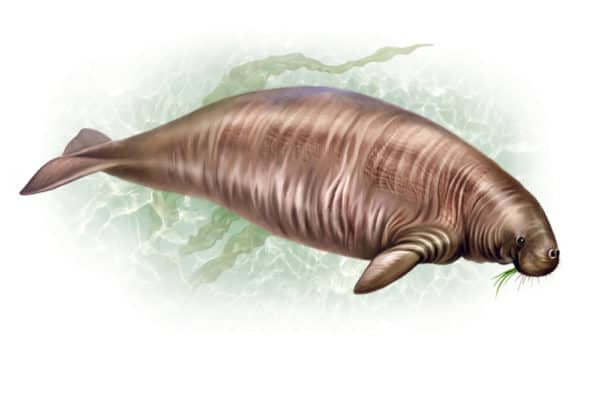 View all of the Steller’s Sea Cow images!

“Steller’s sea cow was a huge, aquatic animal that closely resembled a manatee or dugong.”

This fascinating creature was first discovered in 1741 by a German naturalist named Georg Steller. Its valuable meat, skin and fat caused humans to hunt it into extinction by 1768.

The scientific name for the Steller’s sea cow is Hydrodamalis gigas. It is part of the order Sirenia, which also includes several manatee species and the taxonomical family Dugongidae. The Dugongidae family used to be quite diverse, but its only surviving member now is the dugong.

The name “Hydrodamalis” is a combination of the Greek prefix “hydro-,” or “water,” and the Greek word “damalis,” which means “heifer” or “young bull.” Gigas is also an ancient Greek word that means “giant.” This means that the scientific name roughly translates to “giant water cow.”

The common name of this creature comes from the fact that these animals were first encountered and documented by the German naturalist Georg Wilhelm Steller.

Like many other species that survived from the Pleistocene era, the Steller’s sea cow was a giant among its taxonomical family.

While there are no fully preserved specimens of these fantastic creatures, there are descriptions, illustrations and skeletal remains that can be studied for information.

Fully grown, these creatures would typically grow to be about 30 feet in length. For comparison, a fully grown adult manatee usually only grows to be up to 10 feet long.

Scientists don’t know for sure exactly how much an adult of this species weighed. Georg Steller recorded two very different weight estimates: The first was about 4 short tons, or 8,000 pounds, and the second was about 26 short tons, or 52,000 pounds. To help you visualize the difference, one adult hippopotamus weighs about 8,000 pounds. Four fully grown elephants put together would weigh about 52,000 pounds. In reality, experts guess that the actual size of the Steller’s sea cow fell somewhere in the middle of those estimates at about 10 short tons, or about 20,000 pounds. That’s nearly equal to three adult-sized hippos.

They had thick, dark skin that was brownish-black in color, rough to the touch and deeply pockmarked. They had very little body hair, but the insides of their flippers were covered in a layer of tough bristles.

Like other animals in the order Sirenia, these creatures had small, squat heads with broad upper lips, small eyes and downward-pointing snouts. They also had stumpy front flippers and forked tail flukes like the dugong.

One interesting feature of this animal is that it did not have teeth like the manatee species that exist today. Instead, they had a layer of stiff, dense white bristles on their upper lips and two tough, scaly plates inside their mouths to help with tearing and chewing plant matter.

Nearly everything that scientists know about these creatures comes from the observations of Georg Steller.

He noted that they were extremely social creatures that lived in small family pods. They were observed helping injured family members, and they also exhibited protective behaviors like placing the young in the safest position among other herd members. Dolphins and elephants also show these types of behaviors.

They were also monogamous, and mating typically happened in early spring. Based on his observations, Steller estimated that female sea cows only birthed one calf at a time, and he believed that gestation took just over a year. In keeping with their social, family-oriented nature, Steller observed parental care for new calves, and the entire herd worked together to protect offspring.

This animal was first discovered in 1741 in a small portion of the Bering Sea, which is frigid nearly year-round. During the Pleistocene era, they would have likely been found much further out into Arctic and Pacific waters.

Their icy living conditions caused them to have a much thicker layer of blubber than most manatee species today as well as a thicker outer layer of skin. The average Steller’s sea cow had a tough hide that was about an inch thick and a blubber layer that was up to 4 inches thick.

Such a thick layer of fat made them very buoyant, so they had to live on the surface of the Bering Sea and could not totally submerge themselves.

Like all other related species, these creatures were herbivores. They survived on a diet of kelp and would typically spend the majority of their days grazing. They would only need to lift their heads out of the water every few minutes to breathe before returning to grazing on various species of kelp that grew near the surface of the water.

While Steller noted that adult sea cows guarded their young from harm, he did not say whether or not they had any natural predators. Experts think it could be possible that killer whales or sharks may have tried to prey on the sea cows, but it would have been difficult for either creature to successfully kill one.

Sadly, the threat that caused them to go extinct came from humans. They were quickly recognized as an extremely valuable commodity, and they were heavily hunted for their meat, hides and blubber.

Some experts believe that the population was already dangerously low when they were initially discovered, so they were hunted into extinction incredibly quickly.

The last sighting of a Steller’s sea cow in the wild came from a group of fur hunters in 1768, just 27 years after they were first discovered.

Georg Steller observed that female sea cows only had one set of mammary glands, so he concluded that they only gave birth to one calf per pregnancy. He said that mating took place in early spring, and the copulation took place under the water. He observed that male sea cows used their front flippers to hold onto the females during copulation.

Though none exist today, researchers think that the average lifespan of a Steller’s sea cow was 50 to 80 years. The Florida manatee can live more than 60 years, so this would be a reasonable estimate.

The Steller’s sea cow has been extinct since 1768 because of uncontrolled human hunting. At the time of its initial discovery in 1741, experts believe that there were only about 1,500 sea cows left in the Bering Sea.

Steller’s Sea Cow in the Zoo

Unfortunately, this species has been extinct for over two centuries. Their closest living relative, the dugong, is near extinction as well, so there are only three in captivity worldwide.

However, many zoos feature manatee exhibits, and they are closely related to Steller’s sea cows.

What year did the Steller's sea cow go extinct?

The last report of a Steller’s sea cow in the wild came in 1768, so this is the year that experts believe that they became extinct.

What is the scientific name for the Steller's sea cow?

The scientific name for the Steller’s sea cow is Hydrodamalis gigas, which roughly translates from Greek to “giant water cow.”

What did the Steller's sea cow eat?

Steller’s sea cows were considered obligate herbivores, which means that they got all of their nutrients from plant matter. They survived by grazing on canopy kelp that grew near the surface of the water.

Why did the Steller's sea cow go extinct?

When the Steller’s sea cow was first discovered in 1741, researchers believe that they were already an endangered population of fewer than 1,500. Hunters in the 18th century believed that the ocean was an “inexhaustible resource,” so they didn’t understand that an animal could be hunted into extinction.

Because of this belief, Steller’s sea cows were heavily hunted for their valuable meat and blubber. This unrestrained hunting caused their already dwindling numbers to plummet, and they became extinct in the wild less than 30 years later.

Where did Steller's sea cows live?

Steller’s sea cows lived in the Bering Sea, which separates Russia from Alaska. Its waters are frigid year-round with average temperatures around 40 degrees Fahrenheit. [7]

What Kingdom do Steller's Sea Cows belong to?

What class do Steller's Sea Cows belong to?

What phylum to Steller's Sea Cows belong to?

What family do Steller's Sea Cows belong to?

What order do Steller's Sea Cows belong to?

What genus do Steller's Sea Cows belong to?

What type of covering do Steller's Sea Cows have?

What are some predators of Steller's Sea Cows?

Predators of Steller’s Sea Cows include large sharks and humans.

What are some distinguishing features of Steller's Sea Cows?

How many babies do Steller's Sea Cows have?

The average number of babies a Steller’s Sea Cow has is 1.

What is an interesting fact about Steller's Sea Cows?

Steller’s Sea Cows were hunted to extinction in 17 years!

What was the lifespan of a Steller's Sea Cow?

What was the lifespan of a Steller's Sea Cow?