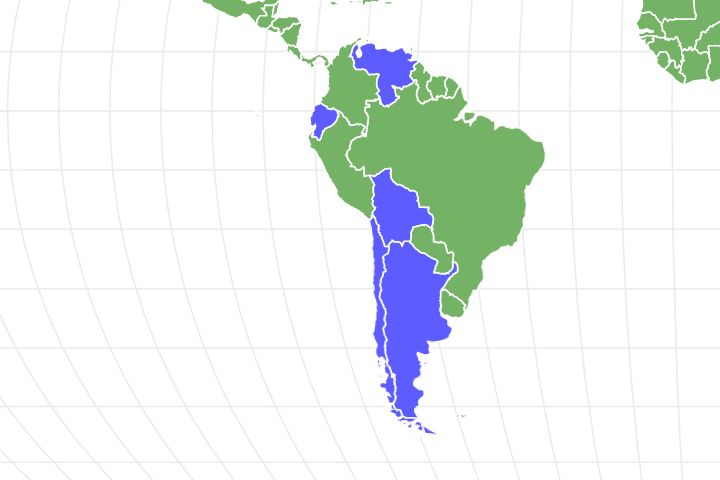 View all of our Vicuña pictures in the gallery.

View all of the Vicuña images!

“The vicuña produces some of the finest wool in the world.“

A member of the camel family, the vicuña is perhaps lesser known than its close llama and alpaca relatives, but their fur has been used to make clothing for thousands of years. In the wild, this wool helps the animal survive in the frigid climates of the Andean Mountains. Following the fall of the Incan Empire, they were hunted unscrupulously for their fur and almost driven to extinction. Today they are protected by Peruvian laws from excessive hunting; only certain companies are allowed to make sweaters, scarves, suits, coats, and other clothing from their fur.

This article will cover some interesting facts about the identification, size, habitat, and diet of the vicuña.

The scientific name of the vicuña is Lama vicugna. Vicugna is simply another way of writing the Spanish word vicuña. This in turn was borrowed from the indigenous Quechua word wik’uña, which refers to the colors of the vicuña. As a member of the family Camelidae, they share a close relationship with wild guanacos, domesticated llamas and alpacas, and more distantly, other camels. There are two recognized subspecies of the vicuña in the wild.

The vicuña is characterized by an exceptionally long neck, slender legs, big rabbit-like ears, and a stout body. The thick wool coat, which is longer around the neck to confer protection from the cold, comes in white and brown colors. White is found around the stomach and inner legs, whereas brown and tan colors exist around the back, neck, head, and outer legs. However, the coloration is much more limited compared with llamas and alpacas, which come in a much wider range.

Measuring anywhere between three and six feet long, this animal is considered to be the smallest member of the entire camel family. It is about the same size as a small scooter. The identification between males and females can be a little tricky because they look so similar to each other, but the male does tend to be larger.

As a highly social species, vicuñas generally form three different kinds of groups. Family groups, which consist of around five to 15 females and their offspring, are led by a single male who defends his territory from intruders. Juvenile males form small bachelor groups shortly after they become independent. They will remain in this group until they are old or strong enough to establish their own territory. Older males who are unable to maintain their own families tend to form the third group, the solitary herds.

Vicuñas can communicate with each other through a series of vocalizations, the most important of which is the alarm call. While it’s true that any member of the herd can make an alarm call, it’s usually done by the dominant male, who tends to be on high alert throughout the day. When he makes the call, the rest of the herd will begin running away while the male brings up the rear. As very shy and skittish creatures, they are quick to flee from danger. Their long ears appear to grant them exceptional hearing to locate predators, while their eyes have a very wide field of view.

As diurnal animals, they spend the majority of their day grazing for food throughout their territory and then sleep at night. They require a lot of space to move around in, sometimes as much as eight acres per animal. They mark the boundaries of their territory with large communal dung heaps. One of the other interesting facts is that they have the ability to spit just like llamas and alpacas. This might be done to clear the air passageways of obstructions.

The vicuña is entirely native to the Andean region of South America. Their native range spans across the semi-arid grasslands of Peru with smaller populations in Argentina, Chile, and Bolivia. They were later introduced to Ecuador as well. They live at exceptionally high altitudes up to nearly 16,000 feet.

The local Andean people harvested the fur of the vicuña for many centuries without hunting and killing them (except to occasionally obtain their meat). After the fall of the Incan Empire, however, the Spanish colonists hunted the animal almost to the point of extinction. Today the species is protected by federal laws, and it generally has few threats in the wild besides its natural predators. Habitat loss is generally not a concern because it lives at a high elevation where few people reside. However, because of the cost of its fur, illegal poaching can still be a problem.

What Eats the Vicuña?

The puma is considered to be the main predator of the vicuña. It is estimated to be responsible for more than 90% of all adult deaths and half of all calf deaths. They are also at risk of falling prey to Andean condors, Andean foxes, and domestic dogs. The vicuña’s first impulse is to run away and hide, but if it is feeling particularly bold, then it may stand its ground and charge. These animals mostly rely on the safety of the herd for protection.

What Does the Vicuña Eat?

The diet of the vicuña consists of grasses and shrubs that grow along the ground. Their specially adapted multi-chamber stomach allows them to digest tough grassy material in order to extract as many nutrients as possible. Their diet appears to be supplemented with minerals from licking stones and rocks and drinking saltwater.

There is some evidence to suggest that the vicuña can mate throughout the year, but their main reproductive season tends to occur between February and April. The male will mate with any females who live in his territory. He will also sometimes enter other territories and attempt to herd females back to his own. However, the males are very vigilant about defending their territory from any intruding rivals.

Vicuñas will mate with the female laid on the ground and the male standing on top of her. After a gestation period lasting about 11 months, the female will give birth to a single baby at a time. Even though the mother will stay with her baby for the next six to 10 months, until it’s weaned from her milk, she will sometimes leave it alone to fend for itself, especially if the mother is suddenly startled. If they become separated, then the calf will make many loud calls to help the mother with identification. The mother and baby will remain within the male’s territory for safety while they graze for food, but the father provides little direct support. Instead, his main contribution is to defend the territory and provide a warning when a predator is near.

Females will generally reach sexual maturity after about a year into their lifespan, but males may take up to three years to do the same. As mentioned previously, the males will leave for a bachelor group after a year, while the females will seek out a family herd. The normal lifespan of this species is anywhere between 15 and 20 years in the wild. Many of them will die in the first year of life from predators, starvation, and disease. The weight of the newborn seems to affect the survival rate after the first year.

According to the IUCN Red List, the vicuña is considered to be a species of least concern. There are an estimated 350,000 mature individuals remaining in the wild (with an unknown number of calves and juveniles). Back in the middle of the 20th century, when there were perhaps only 6,000 individuals remaining, Peru created several reserves to protect them and then reintroduced them to regions where they had disappeared. Numbers are only considered to have recovered a moderate amount compared to the previous height, however.

Is the vicuña carnivorous, herbivorous, or omnivorous?

The vicuña is herbivorous. It consumes only plant material.

Why is the vicuña wool so expensive?

The cost of wool is related to the way it’s collected. The animal needs to be captured from the wild in a humane manner. There are legal limits on the amount of wool that can be collected. And only a small number of companies and brands are actually allowed to process the wool. Because the wool is sensitive to chemical treatments, it is usually left in the original colors.

Is a vicuña illegal?

The vicuña is a wild animal under the protection of the Peruvian government. It is generally illegal to interfere with them in their natural habitat unless one has a special permit from the government.

What is vicuña in English?

How much does it cost to buy a vicuña?

As a wild animal, the vicuña cannot be bought legally (the domesticated llama and alpaca, on the other hand, are available for purchase). However, coats, shirts, and other clothing derived from their wool can be purchased for varying prices. Because the cost is usually quite expensive, it’s considered to be a luxury item.

What is more expensive: vicuña or cashmere?

The vicuña produces some of the world’s most expensive wool. It costs $400 to $600 per kilogram, compared to only $80 for cashmere.

Which ancient culture is a vicuña from?

The vicuña has been used for their wool by Andean peoples (including the Incans) for many centuries. However, keep in mind that, unlike the alpaca and llama, this is actually a wild animal. The Andean people had to capture it from the wild to shear the wool. They did not raise this animal in captivity.

How many vicuñas are left in the world?

There are an estimated 350,000 mature individuals remaining in the wild. This is up significantly from a low of only 6,000 in the middle of the 20th century.