Platypuses may be one of the cutest and oddest animals on Earth. As babies, they look like furry little ducks with tails. But did you know that platypuses contain venom? This venom is not lethal to humans, so they are not entirely poisonous or dangerous. However, platypus venom can be so strong it can kill other mammals, such as dogs and cats!

There is no doubt that the platypus is a very interesting animal. Looking at its physical appearance alone, you wouldn’t easily figure out what a platypus is – a mammal, a bird, or a reptile? The platypus sports a mammalian body covered with fur, webbed feet like an otter, a duck’s bill, and a beaver’s tail. It even lays eggs like reptiles and lacks a stomach! But what’s more interesting is that platypuses are one of the very few mammals that possess venom.

Since platypuses do not have a typical mouth designed like mammals, they also do not have teeth. They have a duck-like bill that helps them scoop up and smash their food. Since they do not have teeth, platypuses cannot bite. However, male platypuses have sharp, pointed spurs at the heel of one of their hind feet. These spurs connect to a gland that holds and secretes venom. Spurs act like stingers to prick adversaries, predators, hunters, and humans. Thus, unlike other animals and mammals, platypuses do not deliver venom through their bite but through these spurs in their feet.

Platypuses may be weird in their ways, but they still have a few natural predators in the wild, including snakes, eels, and foxes. Their spurs and ability to secrete venom help them get away from or deter their hunters. Besides, male platypuses also use their spurs to challenge or compete with other male platypuses, especially during the mating season. The platypus‘s venom sacks grow and secrete more venom during the spring, wherein platypus couples mate. Yet, the spurs and venom are not intended to kill other male platypuses, but only to aid them in the fight.

Are Platypuses Dangerous to Humans?

The platypus venom is known to cause extreme swelling and intense pain, but they are often not dangerous or life-threatening to humans. Yet, they can be dangerous to other animals, especially smaller mammals. Since the platypus’ spur has a pointed end, the platypus sting feels like a slight pinprick. The spurs are filled with venom, causing pain on the pricked wound. The platypus venom is not strong enough to kill a human, and there has been no record of human fatalities brought by platypus venom yet. However, the spur prick can cause swelling and excruciating pain that may last for days or even weeks.

People with weaker immune systems can develop more severe symptoms that include increased sensitivity to pain or hyperalgesia, nausea, cold sweats, low blood oxygen, hyperventilation, and convulsions, depending on the amount of venom released by the platypus into the body.

The platypus venom has some molecules that are also present in reptiles. Along with solenodons, shrews, and vampire bats, the platypus is one of the few venomous mammals, as venoms are often defense mechanisms found in reptiles and arachnids. While a platypus sting can only cause severe pain in humans, its venom has a lasting and even deadly effect on other animals. Platypus males can deliver a sting that may leave animal victims incapacitated for weeks. There have not been enough studies about the composition of the platypus venom that triggers physical symptoms in humans and fatalities in animals.

Are Platypuses Poisonous to Humans?

Platypuses may have venom secreted through their pointed spurs, but their sting and venoms are not strong enough to kill humans or cause permanent damage. But don’t be lulled into thinking a sting from one can’t hurt terribly or have lasting effects. One 57 year old man in Australia was treated by doctors for a platypus sting after handling one, and had pain that he described as worse than shrapnel wounds he had once endured in past military service. He spent six days in the hospital with little relief except for a regional nerve blocker administered by doctors. And he had a painful, swollen finger that took several months to heal.

Scientists have discovered that the venom of a male platypus, which contains over 80 different toxins, is similar to that of venomous snakes, lizards, sea anemones, starfish, and even spiders. These types of toxins can cause side effects like nerve damage, blood coagulation, inflammation, and muscle contraction.

Some Aboriginal groups in their home country, Australia, hunt platypuses for food. However, platypuses are protected worldwide, and eating one is highly illegal. Apart from the legal notions, most people refrain from consuming platypus meat as their venom might contain toxins not good for the body.

Are All Platypuses Poisonous?

Are Platypuses Dangerous to Pets?

Platypuses are mammals with venom not lethal to humans. However, this venom is enough to cause grave damage to some mammals, including pet animals. Taking a platypus in as a pet might not be a good idea, especially when you live with other pets in your home.

Platypus venom is excruciatingly painful for dogs and cannot be alleviated by painkillers or morphine. It has been said that the venom of a platypus sting can kill a medium sized dog, but evidence to back up that claim is hard to find. When research of historical records was done by the Australian Platypus Conservancy, they found a testimony from one Australian hunter in the 1800’s who claimed that four of his dogs were killed by platypus venom. On the other hand, another hunter claimed his dog was stung on more than one occasion by a platypus, and suffered swelling at the point of contact (in one case, the head), but the swelling went down after 36 hours the first time, 10 hours the second, and 3 hours the third. This would suggest that the dog became more resistant to the venom with the subsequent stings. There have been other accounts of dogs recovering from stings as well.

While it is said that platypus venom kills dogs and cats, it is equally as hard to find documented cases of cats dying from the sting of a platypus.

Danger for Other Small Animals

There is still some mystery surrounding the toxicity of platypus venom. But scientists have done lab studies where they injected the venom into rabbits and mice. These studies yielded little effect to these animals if it was injected under their skin. However, if they injected the venom into a vein of the animal, it perished. Their conclusion from these studies was that if a dog (or cat) received an injection from the stinger of a platypus directly into a major blood vessel, that could cause the death of the animal.

How to Avoid Platypus Stings?

Platypuses do not attack humans. They are shy animals and will avoid confrontation with humans if they can help it. They aren’t equipped with teeth that can help them bite, and the only form of defense they have is the pointed spurs in their heels. However, if platypuses are handled in the wild, they can prick you with their spur and inject venom. The best way to avoid a platypus sting is:

The main take-away–platypuses in their natural habitat should be left alone.

What If You Get Stung?

In the rare chance that you might be stung by a platypus, what should you do? 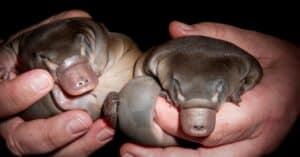