Discover The 7 Largest Animals In Wyoming, and Where You’ll Find Them

Wyoming is known for its expanses of open land. The state is home to the famous Yellowstone National Park, a 2.2 million-acre area where people can camp, fish, and see wild animals like bison. As you might imagine, this wealth of land has many different types of animals. So, what are the biggest of them? In this article, we’re going to show you seven of the largest animals in Wyoming!

What Are the Largest Animals in Wyoming?

As we go through our list of the largest animals in Wyoming, you’ll notice that we’re not just focusing on large mammals. We’re going to collect seven animals from different groups, giving you a better view of the various sorts of big animals that inhabit the state. So, our list will be rich with birds, reptiles, amphibians, and more!

The lake trout is the largest fish found in Wyoming. The largest lake trout ever caught measured 4 feet long and weighed 50 pounds, but that is not typical of the species. These fish have a gray body with white spots and a deeply forked tail.

They are considered a harmful nonnative species because they consume cutthroat trout, especially younger ones. That has led to a reduction in the cutthroat trout’s overall population. Lake trout have been found in many lakes throughout the state, including Yellowstone Lake, Buffalo Bill Lake, Hog Park Lake, and many others.

The American white pelican is not a common sight in the U.S., but it stays to breed in Wyoming and a few other states in the western U.S. It has a nesting colony in Albany County within Wyoming and can be seen near lakes and reservoirs in southeastern Wyoming.

These birds are easily among the largest animals in Wyoming because they have a wingspan that can measure anywhere between 7 and 9.5 feet long! They are large, mostly white creatures with black remiges and an orangish bill. Their size is immediately evident when you see this bird without spreading its wings as its overall body length can reach 70 inches!

Few animals have had such a rebound in terms of numbers as the bison. This massive mammal grows up to 11 feet long from head to tail, and it can reach weights of over 2,000 lbs! Interestingly, Yellowstone National Park is believed to be the only place where bison have lived since prehistoric times.

You may find these large, brown, shaggy-haired mammals living in herds, but it’s best to stay away from them. They will charge you if you get too close, and such an encounter can leave a person with serious injuries or even result in their death.

The bullsnake is a subspecies of the gopher snake, and it’s known for bearing a passing resemblance to the western diamondback rattlesnake. Its looks along with its defensive posture frequently lead to bullsnakes being killed by humans out of fear that it could bite them. Although they are scary-looking, they are not venomous snakes.

You’ll encounter these snakes in marshy areas, mountainous regions, and even suburban areas throughout Wyoming. They are attracted to areas where they have ample prey. If you see one of these snakes, it’s a good idea to leave it alone.

Tiger salamanders are unique terrestrial salamanders that are found throughout the central and some western portions of the United States, including Wyoming. These amphibians are usually between 6 and 8 inches long with brown or gray bodies. They get their tiger moniker from the yellowish stripes and spots on their bodies.

This salamander is found in low elevations. Mostly, it takes up residence near streams and ponds. Yet, don’t count on easily finding one of these critters. They spend a lot of their time living in underground burrows to keep them safe from the elements.

The Cecropia moth makes this list of the largest animals in Wyoming for being its largest insect. Interestingly, this particular moth has been found with a wingspan that measures up to 7 inches! It is found in the eastern third of Wyoming, from north to south, in the spring and early summer.

Oftentimes, they live in hardwood forests and only live for a short while to reproduce. After all, they can’t eat so their lifespan is mere weeks. These moths are known for their reddish bodies along with their large black and brown wings with various bands of white, tan, and red.

The Carolina wolf spider is a somewhat frequent pest in Wyoming homes. These are the largest spiders in Wyoming, and they are rather fast. As a result, most people are worried when they see a four-inch-long spider running across their path.

Outside of homes, these spiders are found in fields, forests, and other places where they can stalk and hunt their prey. After all, they don’t use webs to catch prey. Although a bite from a wolf spider can be uncomfortable, they rarely require medical attention.

Now that we’ve covered the largest animals in Wyoming, you should realize that the state has a wide variety of creatures. Some of the biggest animals are dangerous and should be avoided, like bison. Yet, most of them are safe to admire from a distance, like the American white pelican.

This Kingsnake Climbing a Brick Wall Is Eerily Peaceful 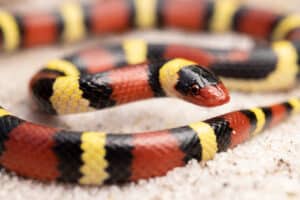