Discover the Largest Snake Found on Each Continent

Snakes are found on almost every continent across the Earth. These slithering reptiles are, without a doubt, some of the most resilient and evolutionary hardy creatures to ever live. Worldwide, there are over 3,000 species of snake that have been discovered, a testament to just how successful these animals are. While most members of the group aren’t all that large, there are a few standout examples that show us just how massive a reptile can grow. Let’s discover the largest snake found on each continent and learn a bit about them!

The Central African rock python can be found in forests and near deserts but is almost always near a source of water. Common prey includes rodents, monkeys, warthogs, crocodiles, goats, and more. In some instances, it has been recorded eating impalas and adult hyenas.

The Australian scrub python is an arboreal snake, meaning it spends most of its time in trees. With its large size, the scrub python may be one of the largest arboreal snakes globally. It can be found in Northern Australia, primarily in Queensland and Cape York Peninsula. It can also be found on a few small islands in the region. Common prey includes small mammals, birds, wallabies, and domestic poultry.

The reticulated python is native to South and Southeast Asia and can be split into three subspecies. They generally live in rainforests, woodlands, and grasslands, but are almost always near streams and lakes. Common prey of the reticulated python includes small mammals and rodents, while large snakes can feed on Indian civets, pigs, and even deer.

Europe isn’t generally known for its snakes and doesn’t have any native pythons or boas, which are often regarded as the largest types of snakes. The Caspian whipsnake is likely the largest snake in Europe. These snakes usually grow between 4-5 feet long, although the longest to ever be recorded was over 8 feet. This snake is a relatively common species of whipsnake, a type of nonvenomous snake.

The Caspian whipsnake can be found across much of Eastern Europe, notably the Balkan Peninsula. They also live in Albania, Bulgaria, Greece, Macedonia, Serbia, Romania, and a few other surrounding countries. It usually prefers grassy regions with open landscapes and shrubbery.

Eastern indigo snakes can only be found in the southeastern United States, particularly in Florida, South Carolina, Alabama, and Mississippi. They are nonvenomous and are known to feed on small snakes, mammals, turtles, and more.

The largest snake in South America also happens to be the largest snake in the world; the green anaconda. The green anaconda, also known as the giant anaconda, is a species of boa that is recognized as the world’s heaviest snake, and one of the longest. They regularly reach lengths exceeding 29 feet and can easily weigh between 200-300 lbs. Although they are quite large, these snakes are extremely exaggerated, especially in media.

Green anacondas can be found across northern and central South America. They are tropical snakes and live in dense rainforests across the Amazon. Common prey includes fish, birds, mammals (deer, capybaras), and even caimans.

Although snakes are quite hardy creatures, there are no species that live on this frigid continent!

Largest Snake in North America is not Native

The introduction of a species to a foreign environment can be dangerous in many ways. Look to the state of Florida in the United States for an example. The imported Burmese python found no predators in its new swampy home – and started hunting the former head of the food chain, the alligator. Scientists are pursuing methods for monitoring the deadly snake to contain an expansion of the species throughout the state. 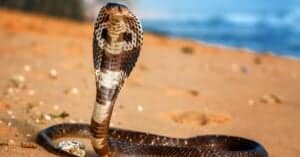