Louisiana is a diverse state situated next to the Gulf of Mexico. Although Louisiana has rich uplands, it also has the alluvial region which was created by the Mississippi River. Within the alluvial region are many swamps and wetlands which are a perfect habitat for many different animals. Amongst these animals are alligators. Incredibly, there are around 2 million in the state of Louisiana alone – the largest population in the entire US. As alligators live in freshwater habitats, the wetland regions are a prime area for them to thrive.  In fact, some thrive so well that they reach astonishing lengths! But just how big do they get?  Join us as we discover the biggest alligator ever found in Louisiana!

Alligators are large reptiles from the family group Alligatoroidae which includes all alligators and caimans. They are a dark olive-brown color and have white bellies, although juveniles have yellow bellies. Alligators are native to only China, the United States, and Mexico. There are currently two living species – the American alligator and the Chinese alligator. The Chinese alligator is the smaller of the two – reaching only between 5 and 7 feet long – and is critically endangered. American alligators are not endangered and are much larger, typically ranging between 11 and 16 feet long.  Males are larger than females and size is generally related to age, with the oldest males being the biggest.

Alligators are territorial and typically live in freshwater environments such as swamps, marshes, ponds, lakes, and rivers where they create “alligator holes”. These holes create new habitats for animals and help to increase plant growth and diversity. This makes alligators incredibly important to the ecosystem. Alligators also have a much better tolerance for cold than crocodiles. Alligators can survive for several days in freezing water by sticking their snout above the water while their body exists in a dormant state. This is known as brumation.

Despite their size, alligators are capable of moving quickly over short distances in “bursts” which they use to great advantage while hunting. Prey is usually ambushed near the water’s edge. Smaller animals are grabbed and swallowed immediately while larger prey is usually dragged into the water and drowned. Although alligators consume a wide range of prey, their diet tends to depend on their age and size. Younger, smaller alligators mainly eat fish, insects, and crustaceans before moving on to larger prey. Adult alligators eat anything from turtles, fish, and birds all the way up to deer.

The biggest alligator ever found in Louisiana was a massive 19ft 2in. Although not weighed, estimates put it at around 2,000 pounds. Despite the whopping size, this giant is not actually an official record as the claim has not been able to be verified. The massive male was killed on Marsh Island in January 1890 by Edward “Ned” McIlhenny.

McIlhenny was hunting geese in shallow bayous when he came across the giant lying partially submerged. The alligator was dying from old age and exposure to the cold air so he shot and killed it. McIlhenny returned the following day with two friends to try and drag it out of the water.  Due to a combination of its great size and the boggy marsh pulling it down they were unable to move the animal.  Instead, they measured it and then simply left it where it was.  This lack of physical evidence has led to many scientists being skeptical about the actual size of the alligator.

Has any other Alligator come Close to 20 Feet?

Historically there have been numerous other reports of 20 feet long alligators across the US. However, all have lacked sufficient evidence to verify the claim. Despite this, McIlhenny’s giant still remains at the top of the list when it comes to the biggest alligators, and there are still some other pretty big ones that have been captured in Louisiana.

In 2013, a 13ft 4in alligator weighing 760 pounds was caught in West Baton Rouge by alligator hunter Jim White. The alligator was so heavy that he had to lift it out of the water with a tractor. At the time it was actually heavier than the heaviest alligator that had been caught on the Mississippi River (727 pounds).

Also in 2013, in Louisiana, was a 13ft 5in whopper that weighed 900 pounds. Nicknamed the Monster of Monster Marsh, the capture of this alligator was actually documented on the TV show Swamp People. It was caught by mother and daughter duo, Liz and Jessica Cavalier, and remains one of the biggest ever caught on the show.

However, there are also plenty of large alligators outside of Louisiana too. A 17ft 5in alligator that was killed in Florida in the Everglades National Park is one of the longest. One of the heaviest ever recorded is a 13ft 3in alligator in Arkansas that weighed in at 1,380 pounds.

Were Ancient Alligators Even Bigger?

If the thought of a 19-foot-long alligator isn’t already chilling enough, then meet Deinosuchus – a 35-foot-long prehistoric alligator. Deinosuchus is a genus from the superfamily Alligatoroidea and is a relative of modern alligators. These fearsome beasts lived during the Cretaceous period 82 to 73 million years ago. Fossilised remains have been found in 10 US states so far – including Mississippi, Georgia, and North Carolina. Deinosuchus was thought to have lived in brackish waters in and around estuaries.

Although appearing similar to the alligators we know today, Deinosuchus was much larger. It had a wide skull and thick, strong teeth which were adapted for crushing rather than piercing prey. Although saltwater crocodiles have the largest bite force of animals alive today (16,460 Newtons), Deinosuchus is estimated to have a bite force of up to 100,000 Newtons! Given their impressive size and fearsome teeth it’s not surprising to find that they were top predators of both dinosaurs and other prehistoric animals – and quite likely an apex predator. 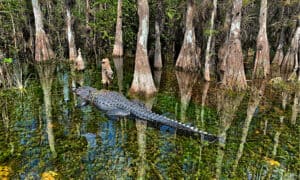 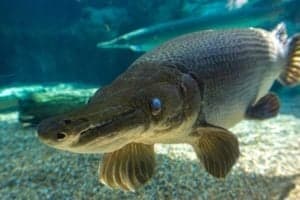