During its migration, the goose flies in V formations to conserve energy. Click through all of our Goose images in the gallery. 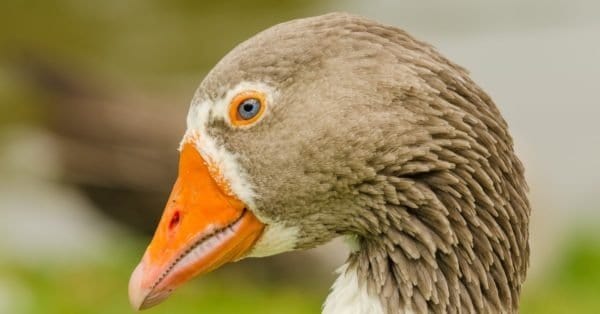 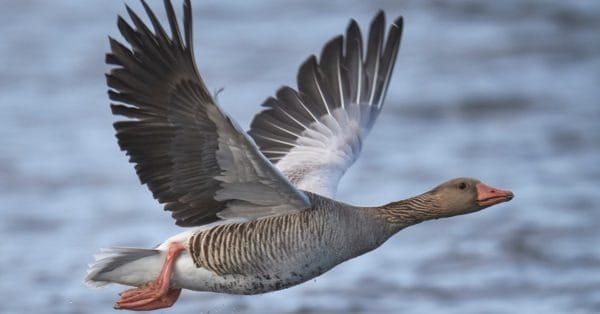 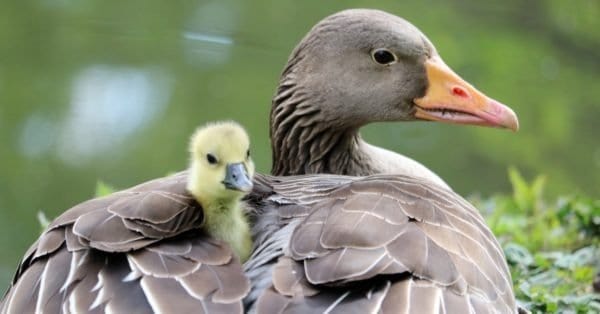 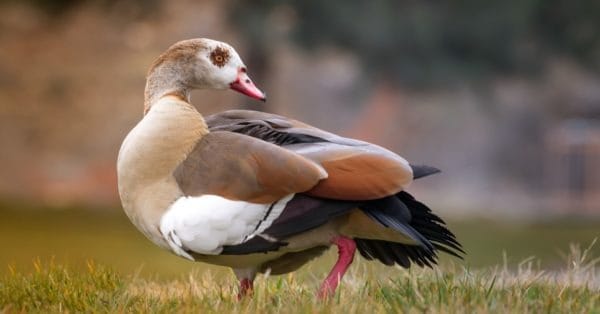 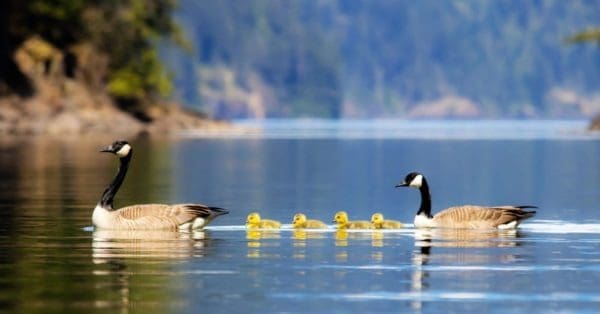 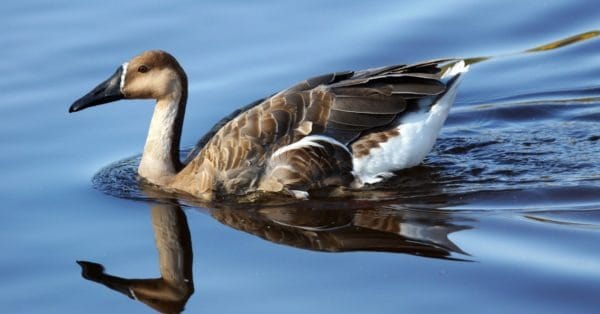 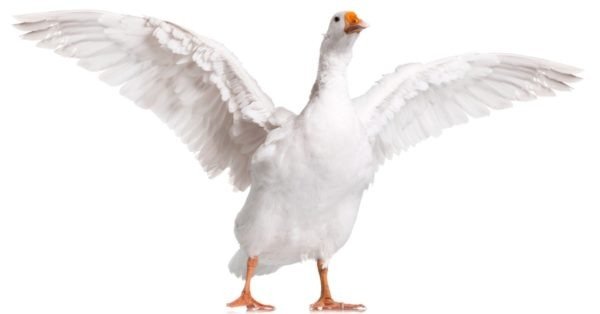 View all of the Goose images!

The goose is among a group of large waterfowls that resides in the Northern Hemisphere.

This bird’s loud, aggressive behavior has become something of a running joke in modern media (epitomized by the popular action puzzle video game, Untitled Goose Game), but as a very caring parent, it is usually just trying to protect its young from danger. The Canada goose is the most common species of North America, but the bird has adapted to live in many different regions around the world.

Where to Find the Goose

The goose is a bird that has evolved over millions of years to live near the freshwater rivers, lakes, ponds, and streams of Europe, Asia, and North America. Most species prefer temperate or Arctic climates, but the Hawaiian species is an obvious exception since it lives in tropical climates.

The bird’s nest is a very simple construction of leaves, grass, twigs, mosses, and lichen in the ground, sometimes near an elevated area.

Closely related to ducks, swans, and other waterfowl, these birds belong to the family of Anatidae, which appears to derive from the Latin anas for a duck. “Goose” is not really a single classification at all. Instead, it is generally defined as any member of two different genera: Anser, which includes the grey and white geese, and Branta, which includes the black geese.

There are some 16 or 17 recognized species, including the Canada, the barnacle, the white-fronted, the snow, the swan goose, and the brant. Several more species (among them the magpie and the pygmy goose) are not true geese at all, despite their names.

These birds are very recognizable due to their plump body, slender neck, and a humped bill that tapers at the end of the mouth. Although physically similar to the closely related swan, they usually exhibit grey or black feathers all over its smaller body with a black or orange bill. The terms gray, white, and black goose generally refers to the color of the neck and head (the black goose has an additional white mark around the chin as well). The largest species are Canadian geese, which weighs in at about 14 pounds and reaches some 43 inches in length. The male gander tends to be slightly larger than the female, but the sexes are otherwise similar in color and appearance.

The social life of these birds revolves around large flocks called gaggles (though in the air they’re called skeins). When defending against threats or interacting with other members, these flocks are a loud cacophony of honks and cries. Sometimes, when they are particularly angry, they will vibrate their neck feathers in defiance. After triumphing over a foe, they will emit a kind of victory cry as well. As members of the waterfowl family, these birds are obviously excellent swimmers and flyers, but the more forward position of their feet compared with swans and ducks also makes them better walkers as well.

These birds migrate in V formations, which allow them to conserve energy by taking advantage of the air currents created by the wings of those ahead of them. This is why they constantly trade places: the bird at the front expend more energy than the bird toward the back. Migratory patterns vary by species. Canada geese, for instance, travel as far south as Mexico and the Southern United States in the winter, sometimes up to 3,000 miles along a single route. Hawaiian geese (also called the nene) remain mostly within the island chain of their birth all year round.

These birds are mostly herbivorous grazers; the bill and mouth specially adapted for grasping and tearing at vegetation.

What does the goose eat?

The bird’s diet consists of sedges, grasses, grains, seeds, and aquatic plants. It will only sometimes resort to insects and fish.

These birds sometimes face threats from hunting, habitat loss, and predation (both natural and introduced species). These threats tend to be localized, however, and affect each population differently, rather than all geese as a whole.

What eats the goose?

Adult birds only have a few natural predators, including coyotes, bobcats, and humans. But eggs and juveniles make a tempting target for skunks, foxes, raccoons, crows, snakes, hawks, snapping turtles, and almost any other carnivorous animal of decent size. Since only the largest carnivores want to tussle with a full-sized goose, most of them resort to subterfuge and guile.

These birds form lifelong monogamous bonds with a single partner. Together they produce a single clutch of white eggs (usually up to 10, depending on the species) in the spring breeding season. If one of the birds dies, then the surviving mate will find pair up with someone else within the same season.

Once she lays the eggs, the female has sole responsibility to incubate them, while the male gander stands guard to protect against threats. Emerging from the egg with downy feathers, the gosling has the ability to fend for itself almost immediately, but it remains under the protection of the parents for the first summer of its life. The parents will lead the goslings in a single file line and hiss at anything that approaches. Geese have a life expectancy of around 10 to 15 years, but they have been known to live some 30 years in captivity.

According to the IUCN Red List, most geese species are considered to be least concern, perhaps because they are rarely hunted enough to be threatened directly. Of the 16 or so true geese species, only the swan, the red-breasted, the Hawaiian, and white-fronted goose are vulnerable, while the emperor goose is near threatened.

Are Geese herbivores, carnivores, or omnivores?

Geese are Omnivores, meaning they eat both plants and other animals.

What Kingdom do Geese belong to?

Geese belong to the Kingdom Animalia.

What class do Geese belong to?

Geese belong to the class Aves.

What phylum to Geese belong to?

Geese belong to the phylum Chordata.

Does the goose migrate?

Yes, most geese prefer to live in more temperate climates, so they migrate south for the winter.

How many eggs does the goose lay?

The goose can lay up to 10 eggs per clutch. However, five or six is the average number.

How fast does the goose fly?

What is the goose’s wingspan?

The largest geese have a wingspan of about 6 feet.

When do geese leave the nest?

The gosling usually leaves the nest soon after hatching and then gains its full flight feathers after about two months, right in time for the annual migration. But even after it matures, the goose may remain with the same flock for much of its life.

What is a baby goose called?

A baby goose is called a gosling.

Male geese can be quite aggressive about defending the nest, but these attacks on humans (which have increased as people intrude on natural goose habitats) are almost never more than amusing incidents that may result in bruises from their beak or wings. The worst injuries usually occur when people trip and fall as a result of a goose attack.

What is a female goose called?

A female goose is usually referred to as either a goose or a hen.

Is a goose a duck?

Geese and ducks are closely related, but the duck is a much smaller bird with a shorter neck and a variety of different colors and patterns. Ducks produce quacking sounds and tend to be more omnivorous.

How big do geese get?

Geese rarely grow longer than 4 feet from mouth to tail.

What family do Geese belong to?

Geese belong to the family Anatidae.

What order do Geese belong to?

Geese belong to the order Anseriformes.

What type of covering do Geese have?

Geese are covered in Feathers.

In what type of habitat do Geese live?

What is the main prey for Geese?

What are some predators of Geese?

Predators of Geese include foxes, owls, raccoons, and wild dogs.

What are some distinguishing features of Geese?

What is an interesting fact about Geese?

There are 29 different species of Goose!

What is the lifespan of a Goose?