You’ve all heard of the massive sharks of the world and oceans past. The megalodon, the great white shark, and the whale shark get most of the attention, but did you know that there are a shocking number of shark species that can all fit in the palm of your hand?

These fascinating creatures possess the same speed, agility, and hunting prowess as their larger relatives with the added bonus of having less demand on their food supply thanks to their small size.

The challenge in ranking these tiny predators is that they are extremely difficult to capture, and the true size of the shark at sexual maturity can be even harder to discern.

These sharks give birth to live pups, but their litter size is only two or three pups at a time. They also have a much smaller range than many of the other species mentioned as they are only confirmed to inhabit continental slope regions around Colombia and Venezuela.

Like many of the other species, the dwarf lanternshark is also vulnerable to inadvertent harvesting as bycatch in deepwater fisheries. Despite the lack of study of the species, they are assumed to be able to avoid population-threatening losses due to the lower end of their depth range being below that of the unregulated commercial fisheries in the area at around 2,000 feet.

The true challenge in completing an accurate ranking of the smallest sharks in the world is the sheer lack of verifiable information about almost all of the species in question. As they are deep-water or bottom-dwelling sharks, they are exceedingly rare even for scientists to be able to study. A number of the species mentioned above have been designated as separate species based upon the discovery of just one animal alone which is referred to as a holotype.

Like many other lantern sharks, the dwarf lantern shark is the smallest shark in the world and has light coming from organs called photophores along its stomach and fins. These help them camouflage themselves when they feed in shallow water. The lit-up underbelly blends in with the natural sunlight streaming down from above the water. The light attracts some smaller animals which the shark then feeds on.

As more of the ocean is explored and more information becomes available about the already known species, it is only a matter of time before even more data about these tiny sharks comes to light.

The spined pygmy shark (Squaliolus laticaudus) has a much wider distribution than any of the sharks that we have discussed previously. While their populations are still fragmented, they can be found along the shores of continents and various islands in the Atlantic, Pacific, and Indian Oceans. Found at depths between 30-5,900 feet, they spend the majority of their time in more moderate depths of 200-2,500 feet.

These tiny sharks give birth to live pups in litters between three and five members that are only 3.15 inches long at birth. They grow to around 5.9 inches for males and 6.7-7.8 inches for females at sexual maturity. The spined pygmy shark was previously deemed to be the smallest shark in the world before the discovery of the shark that holds the number one position on our list.

Pygmy ribbontail catsharks (Eridacnis radcliffei) live at shallower depths in the Indian Ocean and the Indo-Pacific region. They primarily inhabit the continental shelf and the upper levels of the slope between depths of 230-2,500 feet. Threatened by deep-water shrimp trawlers in the regions around India and other Southeast Asian countries, it is suspected that these small sharks can avoid population devastation by retreating below the depths capable of being trawled. Pygmy ribbontail catsharks also maintain populations off the shores of Yemen and in the Gulf of Aden where no commercial fisheries exist.

These small sharks reach sexual maturity around 7.4 inches for males and 6.3 inches for females, but the largest recorded specimen reached around 9 inches.

They migrate to the warmer, higher layers of the ocean to feed during the night and return to the deep bathypelagic zone during the day. These small sharks effectively migrate from depths of around 500 feet all the way down to over 6,500 feet in a single day.

Smalleye pygmy sharks are yet another species that make their home on the continental slopes, enabling those impressive migrations. They are found in extremely fragmented populations near Australia, Indonesia, Taiwan, and Japan, but this separation has not affected their population numbers as they are considered to be widespread and of least concern. Due to the extreme depths at which they can be found, it is suspected that there are numerous areas of habitat in which they have not even yet been discovered.

The Panama ghost catshark is nocturnal, doing nearly all of its hunting and other activities at night. Unlike the majority of shark species, this shark lays eggs containing their young. Because of the lack of information available about this specific species, the exact size of their litter is unknown. So little is known about these catsharks that their IUCN conservation status is listed as data deficient.

The Atlantic ghost catshark (Apristurus atlanticus) is another deepwater denizen of the Atlantic Ocean. This shark lives on the continental slope in the British Isles and Madeira area primarily at depths no shallower than 4,900 feet. They can be identified by the extreme anterior position of both of their dorsal fins. The length of their elongated eyes is equivalent to 5% of their entire body length which gives them a cat-like appearance and is the source of their name.

These small sharks are extremely rare and not much is known about their feeding, reproductive, or behavioral habits. It is believed that they eat small baitfish, and they measure around 9.25 inches in length which earns them their place on this ranking of the smallest sharks in the world.

African lanternsharks (Etmopterus polli) average around 9.4 inches long, and they are found off the coast of Africa. Native to the continental slope on the Western African coast, this species has a wide depth range of 980-3,280 feet in which they can be found. African lanternsharks are bottom dwellers, and they have been known to be caught as bycatch in commercial shrimp fisheries.

As bottom dwellers, they spend a large amount of time in darkness, but it is suspected that they may use their inherent bioluminescence to confuse predators or attract their prey. Lanternsharks’ blue glow acts as a camouflage, enabling them to blend in with their surroundings, essentially becoming invisible.

Like many of the animals found on this list, African lanternsharks are rarely seen and studied, but it is believed that they give birth to live pups unlike many other shark species that we will discuss shortly.

The green lanternshark (Etmopterus virens) is the smallest shark in the world to make our list, and the largest recorded specimen maxes out at 10.2 inches in length. They live in the Northwestern Atlantic Ocean, Central Atlantic Ocean, Gulf of Mexico, and the Caribbean Sea. Males of the species tend to average around 7 inches long, and females are larger at 9 inches. Meanwhile, baby green lantern sharks are around 3.5 inches and are called pups.

Despite its small size, this shark attacks much larger prey by ganging up on them. Squid and octopus are a favorite food source, and some green lanternsharks have been found with eyes and beaks in their stomachs that were so large they would have had to distend their jaws to even swallow them. These sharks are bioluminescent and typically live below 1,200 feet all the way down to depths of 3,000 feet.

Summary of the Top 8 Smallest Sharks in the World

Here’s a recap of the sharks that made the cut as the 8 smallest in oceans around the world:

Ready for more? Try these great reads next! 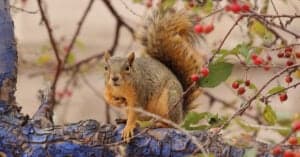